Israel may be a small country, but its treasure trove of wonders range from religious marvels and profound historical and archaeological discoveries to cosmopolitan cities and a vast enchanting landscape. So, where do you start when it comes to planning a trip, and what are the must-sees?

Upon the soil of Israel have walked some of the greatest figures of our past, a ground that has seen the birth of some of the world’s main religions and the passionate battles that ensued to protect them. Jerusalem should be the first stop on any trip, its Old City the jewel in the crown of a fascinating, dramatic and poignant city, but make sure to visit Nazareth and Safed for their rich religious histories. 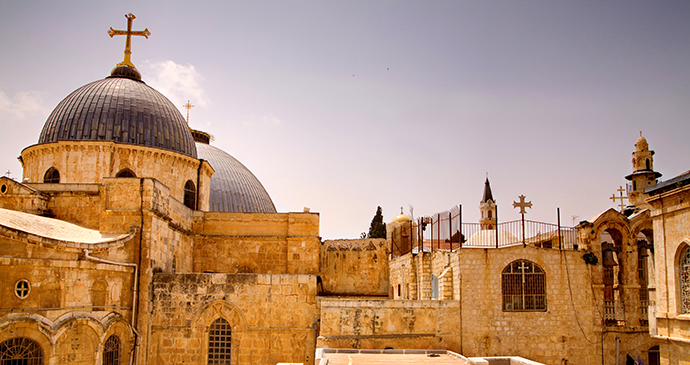 Few cities on this planet can attest to the life that this incredible city has lived © Noam Chen, IMOT

Jerusalem is the city where Judaism, Christianity and Islam meet, where ancient neighbourhoods tumble into shiny new ones, and where both the devout and the secular find their own place. At its core sits the Old City, a remarkable and awe-inspiring area with must-see sites like Church of the Holy Sepulchre, Temple Mount and the Western Wall. 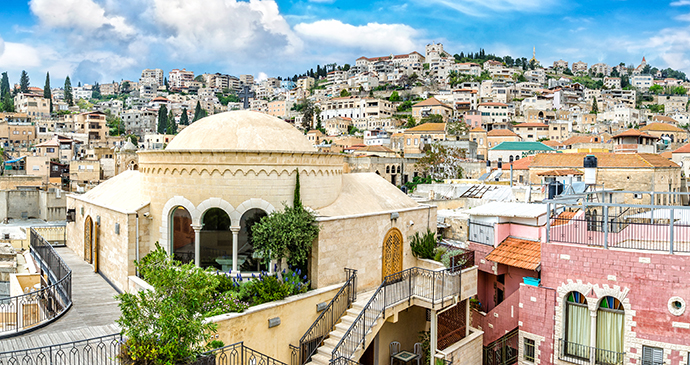 Nazareth is known for its New Testament history and is today a centre of Christian pilgrimage © JekLi, Shutterstock

Among the Christian sites in Israel and across the world, Nazareth holds its claim to being ‘where it all began’. It was here that Jesus spent most of his early life and where the Bible states that Mary was told of the Annunciation by the Angel Gabriel. The fact that Nazareth was mentioned in the Quran suggests existence of the Muslim community here as early as the 7th century CE. Wander through the Old City, overlooked by the Church of Jesus the Adolescent on the hill, and dip into its many churches hidden on winding streets. 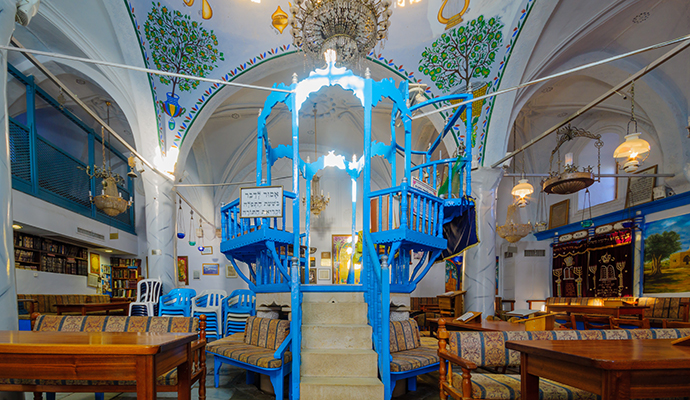 Also known as ‘The Mystical City’, Safed’s clean, fresh air seems to whisper the secrets of the past, where Jewish mysticism abounds and whose spirit is still so clearly present. It is regarded as one of Judaism’s four Holy Cities (along with Jerusalem, Tiberias and Hebron) and was home to some of the religion’s true greats. Scholars, spiritual leaders and religious philosophers gathered in the 16th century and together they gave Safed its proud status as a world centre for Jewish mysticism, Kabbalah.

Israel is a modern country with buzzing cities that lie alongside its wealth of historical treasures. Let loose in party cities Tel Aviv and Eilat or head to laidback Haifa to relax with the locals for a few days. 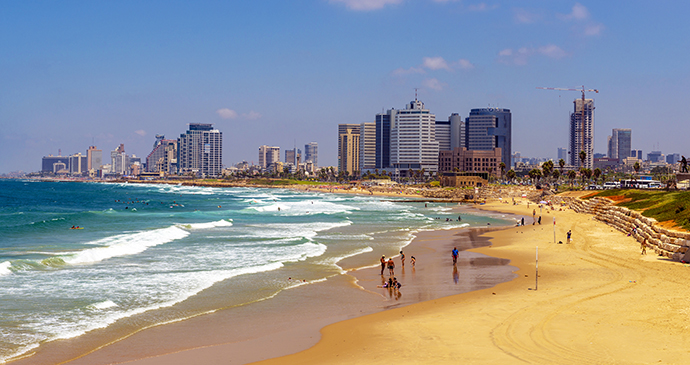 Tel Aviv is by far the liveliest and most cosmopolitan city in the country © Igor Rogkow, Dreamstime

The lively, cosmopolitan hub of Tel Aviv takes pleasure in its role as the country’s economic, commercial and diplomatic centre, its wild beaches and secular way of life providing Jerusalem’s diametric opposite. This colourfully loud and flamboyant city has an almost hedonistic atmosphere, where the main concerns are what to wear, where to be seen and where to party. 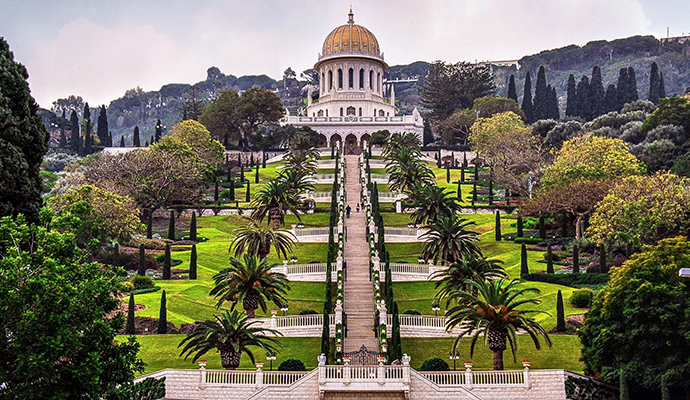 The massive dome of the Shrine of Bab dominates the Haifa skyline © Eve81, Shutterstock

Cascading down the slopes of Mount Carmel towards the sandy beaches of the Mediterranean, Israel’s third-largest city is often overlooked as a tourist destination, yet the city has a lot going for it, and is a great place to spend a few days. Prosperous industries, a large hilltop university, countless historic sights, neighbourhoods old and new, a fascinating collection of museums and a lively restaurant and bar scene make Haifa a firm favourite among Israelis and a pleasant contrast to Jerusalem and Tel Aviv. 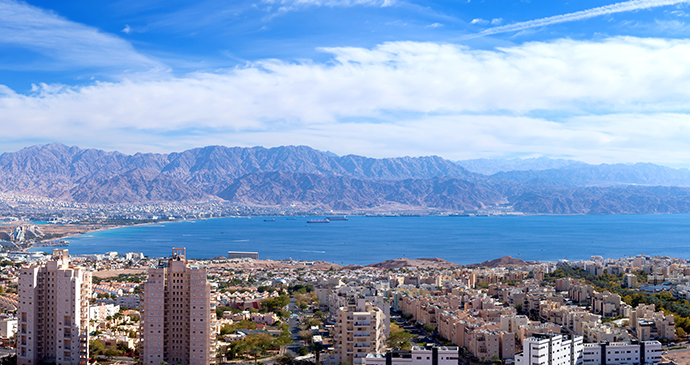 In the far south of the country, perched on the tiny strip of Red Sea coast that Israel lays claim to, Eilat is something of an Israeli Las Vegas. Row upon row of big chain hotels line the coast, the glittering Red Sea water swarms with all manner of sea craft, and the neon-lit pedestrian strip is crammed with restaurants and beach bars. Nevertheless, it has managed to maintain a noisy family atmosphere, especially on the beaches further along the south coast and enjoys almost 365 days a year of sunshine, making it the country’s only beach resort that quite literally never stops.

Historically, the land that is modern-day Israel has always stood on a great world crossroads, where empires, religions and cultures clashed or convened. Today that means historical and archaeological ruins can be found in abundance and sites like Tel Meggido, Masada and Beit Shean are but the tip of the iceberg. 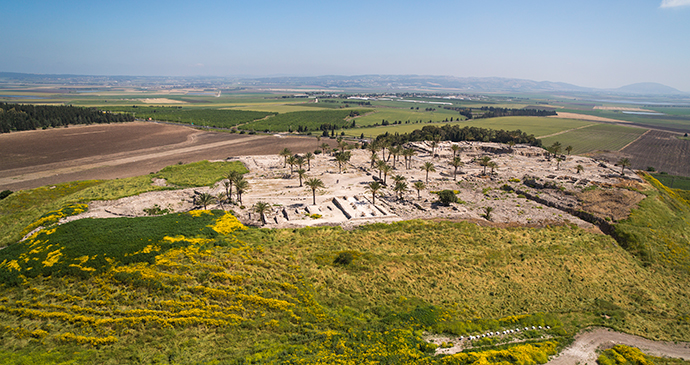 Tel Meggido, or Armageddon, was destroyed and rebuilt 25 times in its 4,400-year existence © Itamar Grinberg, IMOT

According to Christian tradition, Tel Meggido is the site where the battle for the world will take place and, judging by its tumultuous past, it seems a likely enough spot. Destroyed and rebuilt 25 times in its long existence, Meggido was a crucially important strategic site along the great trunk road leading trade caravans from Syria and Mesopotamia down to Egypt. Today, the Chariot City and tunnel remain the most impressive relics in the park. 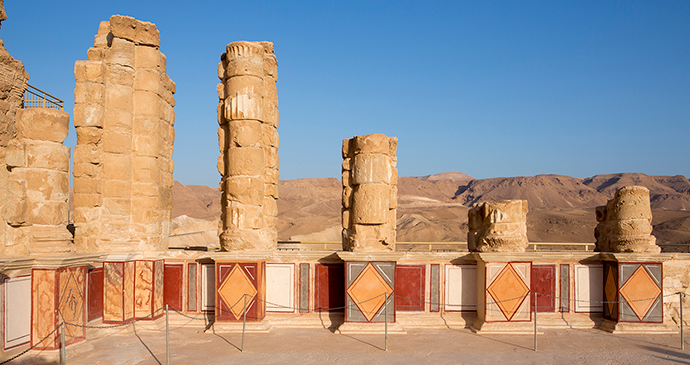 The UNESCO-listed Masada archaeological site is a reminder of the Jewish resistance against Roman rule © Itamar Grinberg, IMOT

More than just one of the country’s most-visited tourist destinations, the archaeological site of Masada represents Israeli patriotism at its proudest. For it was here, on the precipitous rock shelf, that the ancient fortress built by Herod the Great became the 20th-century symbol of Jewish heroism. Today, it is one of the most important stops on the Jewish pilgrimage route and in 2001 was awarded UNESCO World Heritage status. 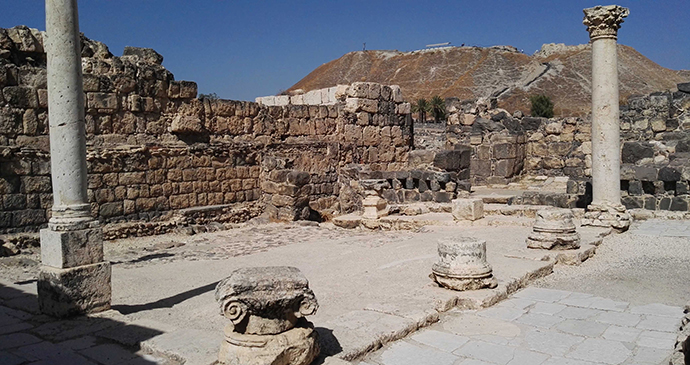 A visit to the remains of the ancient city of Beit Shean is a highlight of a trip to northern Israel © Bukvoed, Wikimedia Commons

Beit Shean was put on the ancient map owing to its strategic importance along the great north–south trade route, with the area’s abundant fertile lands an added incentive for residents, who first settled in the 5th century BCE. Today, the remains are awe-inspiring – rapid and extravagant development under Hadrian’s reign saw the construction of statues, governmental buildings and after the adoption of Christianity, the amphitheatre, bathhouses and fountains.

Israel covers a wonderful blend of hugely varied landscapes as it tumbles from the steppes of Europe past the freshwater Sea of Galilee, the saline waters of the Dead Sea and down to the arid African deserts of the south where Bedouin communities live and the Spice Route begins. 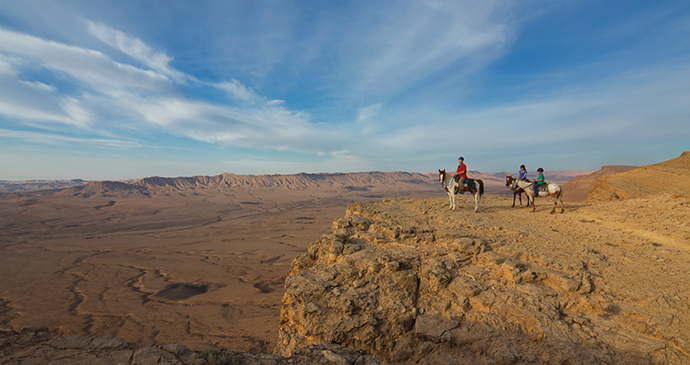 The barren beauty of this rocky desert is home to wildlife-filled oases and the vast Ramon Crater © Dafna Tal, IMOT

The vast Negev Desert occupies half of Israel, and is characterised by the geological phenomenon that is the Ramon Crater, as well as its remarkable landscapes, waterfalls, caves, archaeological sites and rich history. Tourism in the desert is still in its infancy, and if you plan on visiting under your own steam – a highly rewarding and recommended experience – then be prepared for the harsh desert elements. 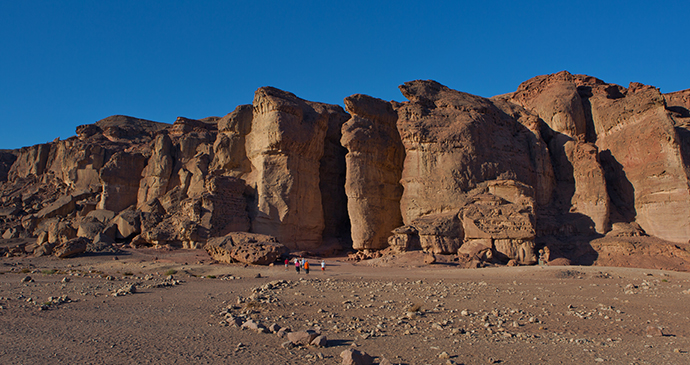 The Arava Desert and city of Eilat make the long journey through the sparsely populated south worthwhile © Dafna Tal, IMOT

The Arava Desert, which Israel shares with Jordan to the east, is dotted with tiny kibbutzim, national parks and holiday retreats. The Arava Desert is in fact one of the most bewitching regions of Israel’s south where Bedouin communities thrive, the Spice Route starts its long trek westwards and where the air is the freshest in the country. 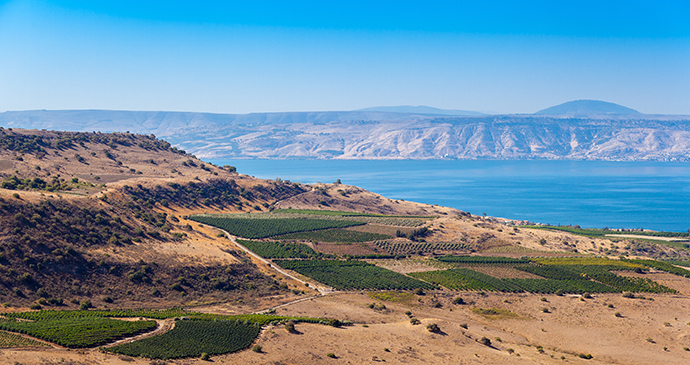 The tranquil shores of this lake are steeped in New Testament history © Roman Sulla, Shutterstock

Steeped in New Testament history, the Sea of Galilee (known in Hebrew as ‘the Kinneret’) was the site of many of Jesus’s miracles, with small churches dotting the shoreline commemorating these events. For hundreds of years Christian pilgrims have made their way to the gently lapping shores of the sea to soak up the abounding tranquillity, gaze down at ancient lands and walk in Jesus’s footsteps. 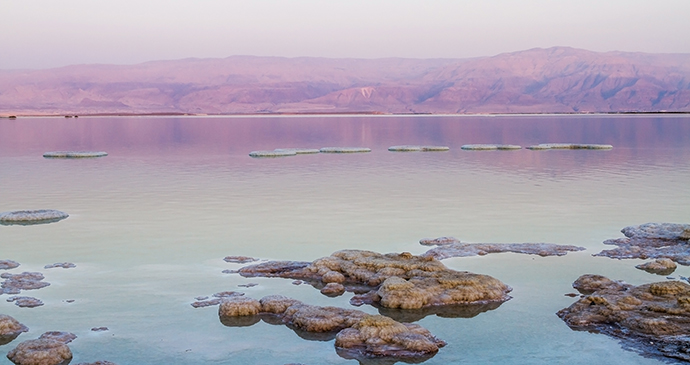 The incredible buoyancy of this large saline lake makes for a surreal experience © Suprun Vitaly, Shutterstock

Forming the eastern border with Jordan and standing at the world’s lowest point of 400m below sea level, the Dead Sea has had a colourful religious, cultural and geological life and is today one of the country’s most alluring and popular places to visit. The incredible buoyancy of the Dead Sea makes for a fun and slightly surreal experience, bobbing up and down like a cork.

Get 10% off our new Israel guide in our online shop: