Here in the UK, Easter is a time of palm crosses, hot cross buns and egg hunts. But how do our European neighbours celebrate?

The week leading up to Easter is a busy one for the women of Hungarian households, who perform a thorough spring clean and go into baking overdrive. In addition, they paint hard-boiled eggs with folksy motifs and patterns, and present them to visitors as Easter gifts. The celebrations themselves begin on Good Friday, with mass services held at 15.00 in churches all over the city. On Easter Sunday, following morning services, children are treated with chocolate eggs and small presents from the Easter Bunny. 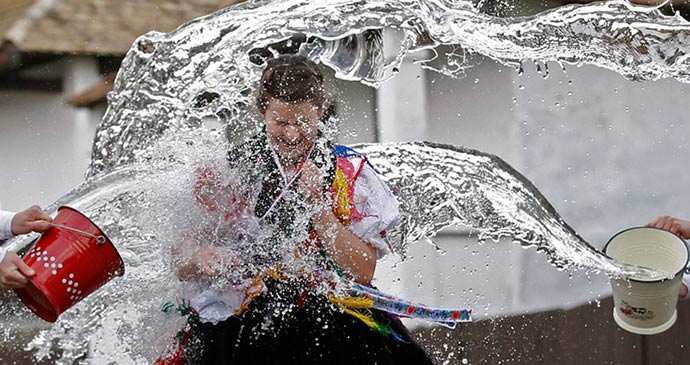 A ‘sprinkling’ is an Easter Monday custom in Hungary © Atla, Flickr

The real fun, though, comes on Easter Monday, when the traditional ‘sprinkling’ (locsolkodás) takes place. Men customarily ‘sprinkle’ their female relatives and friends with cheap perfume, in return for which they receive a reward – a painted egg, some chocolate coins or a shot of pálinka (potent fruit brandy). The last reward means that by mid afternoon there can be some rather giddy sprinklers! Originally this ritual was a fertility rite, when men visited the single women of the village and sprinkled their friends and relatives along the way. Even today it is used as a form of courtship. It is less sodden than it was in the past, however – when buckets of water were used in the villages rather than cologne.

The village of Kautokeino comes alive at Easter when it is consumed by a week-long Easter Festival, a historically traditional event when the local Sámi community celebrate (albeit with snow still on the ground) the end of a long winter and look forward to the coming of spring. It is a time for religious festivals and wedding ceremonies. 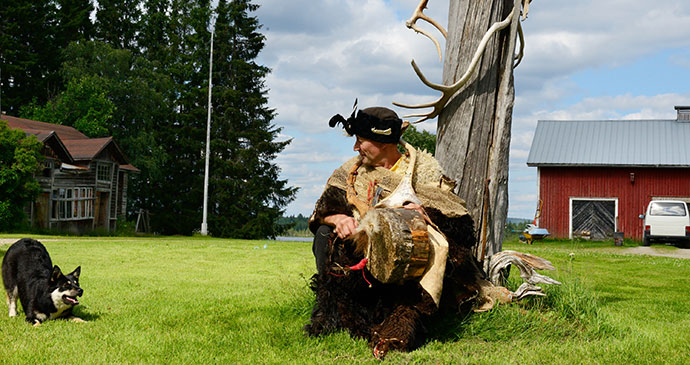 The village of Kautokeino has a large Sámi population © Popova Valeriya, Shutterstock

Although today’s festival still is an important religious event, it is also the time for the reindeer racing world cup, a film festival focusing on the indigenous people of the Arctic, concerts, theatre performances and the Sámi version of the Eurovision song contest when, in addition to the selection of the best song, the best joik (a traditional Sámi song) is chosen.

Not surprisingly, Easter is a major event in Liguria. On the evening of Maundy Thursday in Genoa, there is an evocative procession between the seven oldest and most important churches in the old city, a tradition which dates back to the 15th century.

There is also a popular Good Friday religious parade in Savona. A classic Easter dish, now sold all year round, is the Genoese torta pasqualina. The earliest records of it date back to the start of the 16th century. Thirty-three sheets of paper-thin pastry are overlapped in remembrance of Jesus’s age when he was crucified. It’s filled with whole hard-boiled eggs and spinach.

In Armenia, a night-time Easter Eve church service is attended followed by a family meal on Easter Sunday. As with Christmas, fish forms the centrepiece of the meal and there will also be green vegetables cooked with whipped eggs and a sweet pilaff. There are egg fights for the children, with hard-boiled eggs which they have painted or dyed the previous day. 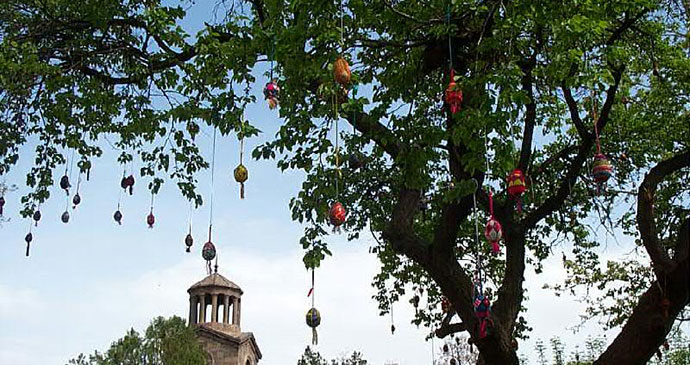 The pointed ends of the eggs are engaged first then, when they have all cracked, the blunt ends are tested. The winner is the one whose egg lasts the longest without breaking. The eggs are then made into an Easter sandwich with lavash, greens (usually tarragon) and cheese.

Orthodox Easter is the biggest festival in the religious calendar in Belarus. In rural communities especially, the woman of the house will spend all day on Easter Saturday preparing food to be blessed by the local priest, before taking it by hand (and generally on foot) to church.

At midnight, families congregate at their local church and parade three times around the outside of its perimeter in solemn procession behind the priest, carrying beeswax candles and thinking positive thoughts for good fortune. After returning home in the early hours, everyone except the matriarch (who has muchstill to prepare and cook) will go to bed, then wake to a sumptuous feast that has by then received the solemn blessing.

Easter is probably a more important event in the Orthodox calendar than Christmas, and a time when even many non-believers attend church for midnight mass on the night of Good Friday. Again, the timing of the Gregorian calendar means that Easter in Serbia usually takes place later than in western Europe. On this night, attendance of the mass is accompanied by much jollity afterwards and the drinking of šljivovica. 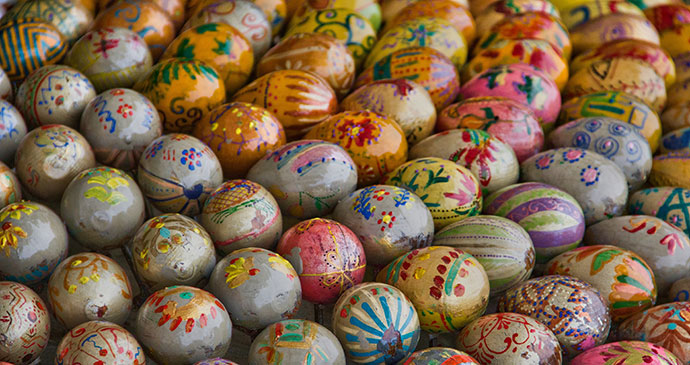 The painting of eggs is another Serbian Easter custom that still survives, especially in Vojvodina, and takes place on Good Friday. During this week whole families become engaged in painting hard-boiled eggs red and sometimes decorating them, although this is a later tradition. The painting of the eggs symbolises the renewal of life and one egg remains on the family altarpiece throughout the coming year. The red colouration is thought to frighten away the devil

The Maltese take Easter week very seriously and many processions take place as well as devotional church visits. On Easter Sunday, church is followed by a large family lunch. Children are given Easter eggs and a figolla, a pastry filled with almond paste and topped with icing.

For more information, see our guides: