Birding is easy in Equatorial Guinea, and just driving through the fringes of towns and cities will undoubtedly result in multiple sightings of hornbills and turacos flying by. Roadside birding is extremely productive, and birding forest-agricultural transitions can often result in impressively diverse birding days, regardless of what habitat you are in. Just be sure to check in with the locals before going out – guides are a must in most regions, and government offi cials can be very sensitive about where you point your camera and binoculars.

Arguably the crown jewel of Equatorial Guinea, Bioko hosts a plethora of rare and local species and is often the highlight of any birding trip to the region. In addition to hosting more than 40 endemic subspecies and three endemic species, the island provides an excellent mix of lowland and highland birding opportunities. Regrettably, much of the lowland forest on the northern half of the island has been cleared for development and farmland, but many species can still be found in the forests surrounding the town edges. More adventurous visitors can hike into the pristine lowlands of the southern coast for some of the more local inhabitants, including black-casqued wattled hornbills (Ceratogymna atrata) and grey-necked picathartes (Picathartes oreas). 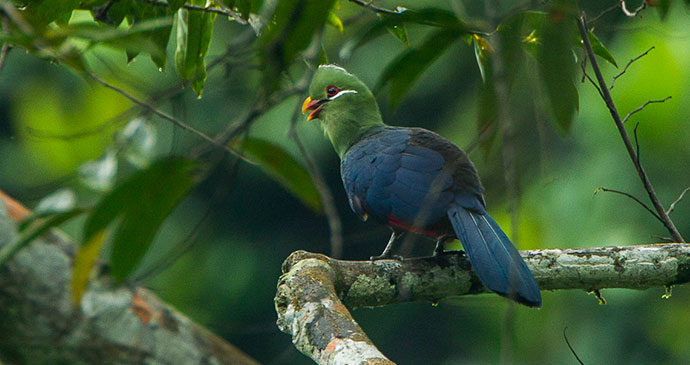 The three peaks of Bioko all harbour Afromontane species, but visiting at least two (Pico Basilé and Pico Biao) is necessary to get the full suite. Two must-stop locations are the peak itself and the ‘Bosque del 2,000m’. The peak’s actual summit is occupied by military towers, but the surrounding elfin forests provide the only habitat in the world for the Bioko speirops (Zosterops brunneus) and provide an opportunity to see many other high-elevation forest and grassland species such as African hill babbler (Sylvia abyssinica), yellow bishop (Euplectes capensis), and oriole finch (Linurgus olivaceus).

Driving back down the mountain, you will soon find the forest transition to the denser Afromontane forests of the Cameroonian highlands ecoregion, and will know that you are at the ‘Bosque del 2,000m’ when you reach a giant landslide on the south side of the road with trees on all sides. Walking this stretch of road provides excellent opportunities for encountering evergreen-forest warblers (Bradypterus lopezi) and green longtails (Urolais epichlorus).

Further south, the southeastern flanks of Pico Biao are home to the Bioko Biodiversity Protection Program (BBPP) field station. Home to a bird population programme that has been in place since 2011, the trails behind the station off er an excellent mix of open country and forest birds, and the dawn chorus from the porch is one of the best in the world. The distinctive ‘whipcrack’ calls of foraging mountain sooty boubous (Laniarius poensis) is a constant distraction from the ubiquitous hooting of the yellow-rumped tinkerbirds (Pogoniulus bilinetus), and the chatter of grey parrots (Psittacus erithacus) often betrays the presence of the large flocks that move across the valley. The fields behind the station often have foraging mountain sawwings (Psalidoprocne fuliginosa), and the forest hosts white-bellied crested flycatchers (Elminia albiventris), surprisingly tame yellow-billed turacos (Tauraco macrorhynchus) and a resident pair of endemic ‘Bioko’ red-chested goshawks (Accipiter toussenelii lopezi).

Those wishing a more unique experience can hike the trail to the summit of Pico Biao, and encounter a wide mix of open, montane and submontane forest  birds. The most productive stretches of the trail are usually the forest just above town, which is reliable for the endemic Bioko batis (Batis poensis), and the stretch of forest approximately 2km from town that parallels the barbed-wire fence. The fence section is excellent for the black-capped woodland warbler (Phylloscopus herberti herberti, the endemic Bioko subspecies) and the Cameroon olive greenbul (Phyllastrephus poensis). The summit itself is a stretch of alpine forest and grassland surrounding a large volcanic lake, and is a great place for eating lunch while watching little grebes (Tachybaptus ruficollis) swimming far below and large flocks of swifts flying high above you. Several species of swift occur on Bioko, including the exceedingly rare (and aptly named) scarce swift (Schoutedenapus myoptilus poensis) and the enigmatic Sladen’s swift (Apus sladeniae). Most of these swifts cannot be safely identified in the field, so exercise caution when trying to identify them, and don’t feel guilty if you have to ‘swift spp.’ in your notes. 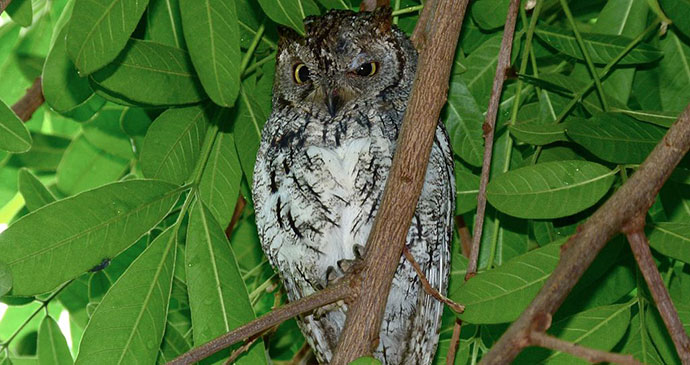 The mainland is home to a large amount of primary rainforest, most of which possesses the same species. The key to lowland birding on the mainland is time; each and every day spent in the lowland forest can be extremely different, so try to find a nice reserve (or two) to spend your time in the lowlands. Excellent locations include Río Campo on the northern coast (which is also home to chimpanzees) and the boulder-studded forests of Parque Nacional de Los Altos de Nsork, home to the shy grey-headed picathartes (Picathartes oreas). Learning songs is key in these regions, as greenbuls and nicators call incessantly from thick cover and you’ll hear, rather than see, most of the birds you encounter. For those with the patience to scour the dense vegetation, the time and effort put it is worth it: four species of hornbill in a day is not uncommon, and species such as barecheeked trogon (Apaloderma aequatoriale), chocolate-backed kingfisher (Halcyon badia), and lowland akalat (Sheppardia cyornithopsis) are just waiting to be found.

Those who wish for another taste of the highlands can head to Parque Nacional de Monte Alen, home to the steep and jungle-laden mainland mountains that possess some of the most unique bird communities in the country. Pink-legged puffbacks (Dryscopus angolensis), black-capped woodland warblers and grey cuckooshrikes can all be found here. For those who are becoming claustrophobic from so much jungle birding, Reserva Natural de Punta Llende on the southern coast offers cool ocean breezes and a unique grassland ecosystem surrounded by native forest. Migrant rosy bee-eaters (Merops malimbicus) can be found flying over the clearings as long-legged pipits (Anthus pallidiventris) run down the road ahead of you. A stop in the nearby city of Mbini is also a must; the town is home to one of the southernmost Preuss’s cliff swallow (Petrochelidon preussi) colonies in the world and the estuary is home to western reef-herons (Egretta gularis) and giant kingfishers (Megaceryle maxima).