If you know your Apollo from your Artemis and feel captivated by the stories that formed the backbone of Classical Greek thought, these five spots should definitely be on your itinerary when visiting the Peloponnese. 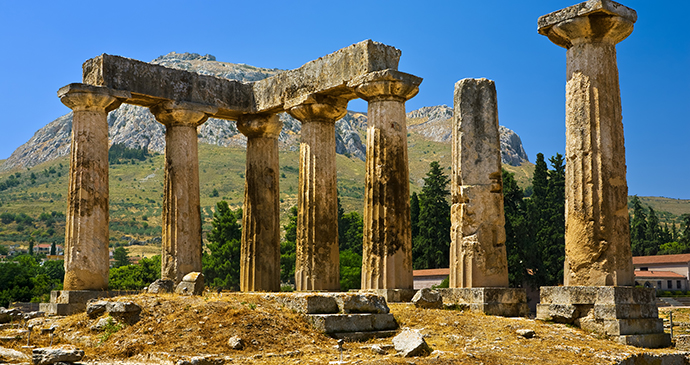 An early ruler of Corinth was Sisyphus, a man so cunning he cheated death not once, but twice © Inu, Shutterstock

Corinth appears in several mythological cycles. Jason and his new wife, Medea, are said to have settled here after stealing the Golden Fleece. Jason, however, soon fell for the younger Glauke, Princess of Corinth. Medea, a powerful sorceress, dispatched her rival with a poisoned cloak that burnt her to death. An early ruler of Corinth was Sisyphus, a man so cunning he cheated death not once, but twice. When he eventually reached the underworld, Hades punished him with an unending task. He forever pushed a rock up a hill, only to have it roll to the bottom again just as he was about to reach the top; a fitting life metaphor for depressed existentialists everywhere.

Sisyphus’s grandfather was Bellerophon, who was charged with killing Chimaera, a beast with the head of a lion, the body of a goat, and the tail of a serpent. To achieve this he needed the help of Pegasus, the winged horse created from Medusa’s blood after Perseus slew her. Pegasus used to drink from the spring on Acrocorinth, and Bellerophon captured the animal with the help of a golden bridle, a gift from Athena. Flying above Chimaera Bellerophon speared the creature with a lance tipped with lead, which melted in its fiery breath, killing it. 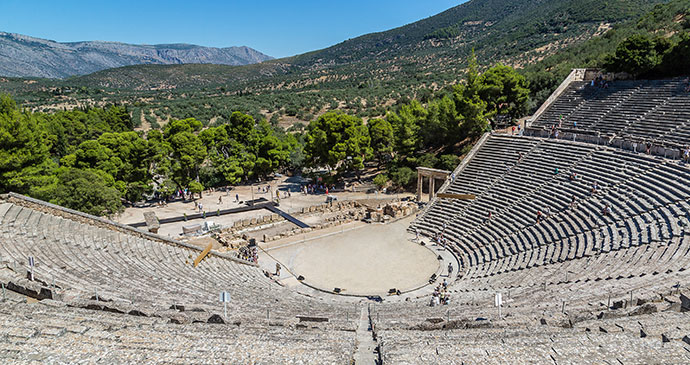 The sanctuary at Epidavros was dedicated to Asklepius, god of medicine and healing © S-F, Shutterstock

The sanctuary at Epidavros was dedicated to Asklepius, god of medicine and healing, and its history is bound up with the mythology that surrounds him. His father was the god Apollo, and his mother Coronis, a mortal. While she was still pregnant she had an affair and Apollo, in his rage, sent his sister, Artemis, to kill her. As she burned on the funeral pyre Apollo, or some say Hermes, saved her child and gave him to the centaur Chiron to raise. Chiron taught Asklepius the arts of healing, and he became so proficient in them that he could even raise the dead. This angered Hades, king of the underworld, and he complained to his brother Zeus, who killed Asklepius with one of his famed thunderbolts. This, in turn, angered Apollo and he killed the Cyclopes who manufactured Zeus’s thunderbolts. This was a step too far, and Apollo was sentenced to a year of hard labour. Wisely he accepted his punishment, and Zeus deified Asklepius in recognition of his good deeds.

Asklepius was commonly depicted as a bearded man with a staff. A single serpent wraps itself around the staff – a symbol of doctors from Classical times to the present day. How this symbolism came about is not known for certain, but there is interesting speculation that it is related to a parasite called a guinea worm, which would have been common in historical times. These are the thickness of spaghetti, but can grow to almost a metre long, and were removed from the body by slowly wrapping them around a stick. Asklepius was worshipped at various sanctuaries, the two most famous being Epidavros and Kos, where Hippocrates, the father of medicine, is said to have worked. People came to them to be healed, but they also developed into social centres, with athletic contests and theatres. 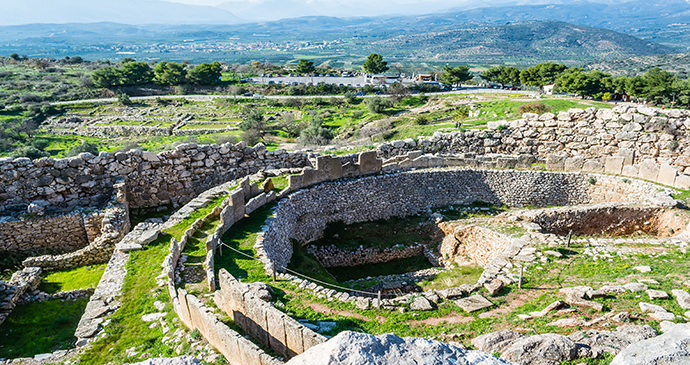 Agamemnon, who was himself married to Helen’s sister Clytemnestra, was overlord of all the Greeks and King of Mycenae © RODKARV, Shutterstock

When Helen eloped with Paris, a prince of Troy, her husband, King Menelaus of Sparta, called on his brother Agamemnon for help. Agamemnon, who was himself married to Helen’s sister Clytemnestra, was overlord of all the Greeks and King of Mycenae. He gathered together a great fleet and prepared to set sail for Troy, which was located in Asia Minor. However, he had off ended the goddess Artemis, and she sent contrary winds against them. She was only placated when Agamemnon gave her a sacrifice of his own daughter, Iphigenia.

With Agamemnon away at war, Clytemnestra, understandably upset at the death of her daughter, took Aegisthus, an old enemy of Agamemnon’s, as her lover. When her husband eventually returned after the long siege of Troy, Clytemnestra murdered him. According to some accounts she smothered him with a robe while he took a bath, before striking him three times with a double-headed axe – an imitation of his act of sacrifice. The cycle of revenge continued, as it always does, with Agamemnon and Clytemnestra’s two remaining children, Orestes and Elektra, murdering their mother and her lover.

This tragic sequence of tales was one of the favourite subjects for Classical art. It is mentioned by Homer in both the Odyssey and the Iliad, and is used in plays by Aeschylus, Euripides and Sophocles. 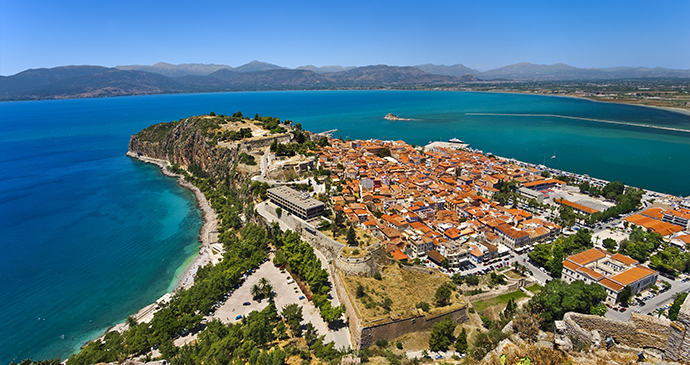 Legend has it that the town was founded by Nauplios, a son of Poseidon, the sea god © WitR, Shutterstock

Legend has it that the town was founded by Nauplios, a son of Poseidon, the sea god. Nauplios’s son Palamedes fought in the Trojan War but was unjustly executed by his fellow Greeks for treachery (he had got on the wrong side of wily Odysseus). Before this ignominious end, however, he had been a busy bee and is credited with the invention of dice, navigation, lighthouses, weights and measures, several letters of the alphabet, a forerunner of chess, and, to cap it all, jokes. The higher of the town’s two castles is named after him. 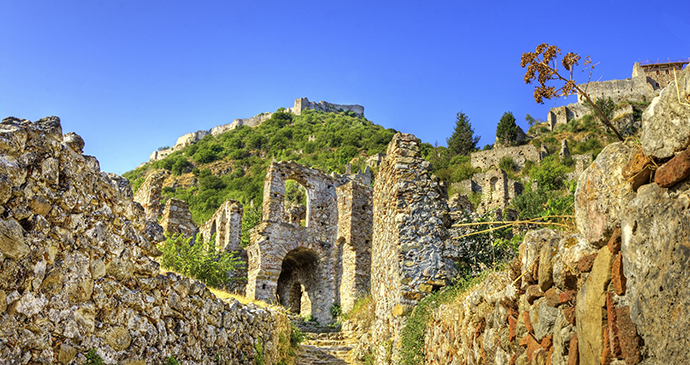 The great myth of the region revolves around the outbreak of the Trojan War © f8grapher, Shutterstock

Homer called this area ‘hollow Lacedaemon’, a reference to its bowl-like geography. The story goes that Lacedaemon married the maiden Sparta, daughter of Evrotas, and named his city after his wife. His territory he authors using the two names interchangeably. The ancient Greeks seemed to prefer Lacedaemonia, while the Romans plumped for Sparta. Nowadays the town is once again Sparta, or more authentically Sparti, and the region is Laconia. The great myth of the region revolves around the outbreak of the Trojan War, and is mainly related in Homer’s two epics, the Odyssey and the Iliad. The story starts with three rival goddesses: Hera, queen of the gods and Zeus’s long-suffering partner; Athena, goddess of wisdom; and Aphrodite, goddess of love. They decided to have a competition to determine which of them was the most beautiful. To judge this they chose a mortal, Paris, a young prince of the city of Troy in Asia Minor (modern Turkey). They were typical goddesses, however, and none of them had any intention of playing fair. Hera offered Paris great power if only he would choose her, while Athena offered him great wisdom. Only Aphrodite knew the best way to a young man’s heart – she promised him the love of the most beautiful woman in the world, and duly won.

Unfortunately there was a bit of a problem: the most beautiful woman in the world at the time, Helen, was already married to King Menelaus of Sparta. Still, trifling details like this were not going to get in the way of a goddess’s promise. Paris went to Sparta and was received with due hospitality by Menelaus. During a feast in his honour Aphrodite caused Queen Helen to become enamoured of the handsome youth and that very night they conspired together and escaped Sparta, spending their first night together at Gythio, before fleeing by boat back to Troy (possibly enjoying a ‘honeymoon’ on Kythira). These events precipitated the ten-year siege of Troy, with the combined Greek armies led by the Great King Agamemnon of Mycenae. It only ended due to Odysseus’s cunning ruse with the wooden horse. One of the most remarkable aspects of the tale is that, after all the bloodshed, a contrite Helen was welcomed back as Menelaus’ queen. The historian Bettany Hughes, despite calling her book on the subject Helen of Troy, makes a convincing case that she should be known as Helen of Sparta. Unlike at Mycenae or Pylos no Mycenaean palace complex has been discovered that we can link to the Homeric myths. Perhaps it lies somewhere under the modern town or was attached to one or other of the Mycenaean sites found in the surrounding countryside – a number of options are discussed in the text.

Want to discover more about the Peloponnese? Check out our comprehensive guide: