Stretching between 56 and 66˚N, from the Aleutians to the Chukchi Sea and Wrangel Island, the Bering Sea, by virtue of remaining within the 10˚C summer isotherm, is biologically Arctic. As the ice retreats, these waters offer rich plankton fishing in the summer over a wide continental shelf for species which are not normally seen elsewhere in the Arctic. They add spice to an Arctic list. In commercial terms, they provide half of the US marine harvest. 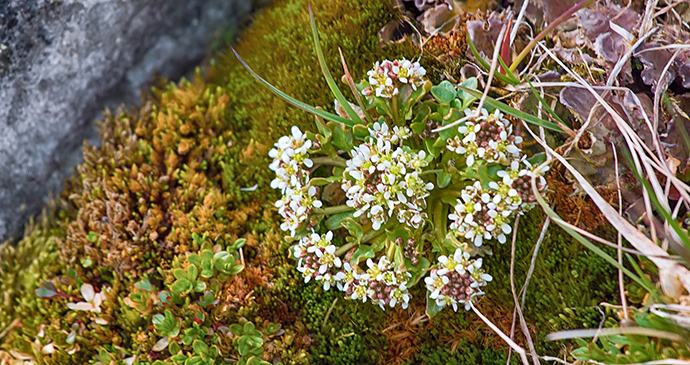 The name for Arctic scurvy-grass derives from its historic value to sailors in warding off scurvy © Maksimilian, Shutterstock

Wild plants resistant to salt and wind thrive in the warmer microclimate between huge boulders multi-coloured with moss and lichen. They are much valued for the pot. Narcissus anemone, Anemone narcissiflora, is used as cress in salads and also prepared in blubber oil and beaten to a creamy consistency for Eskimo ice cream. Arctic scurvy-grass, Cochlearia fenestrata, has leaves rich in vitamin C, and was therefore historically valuable to sailors in danger of suffering from scurvy. 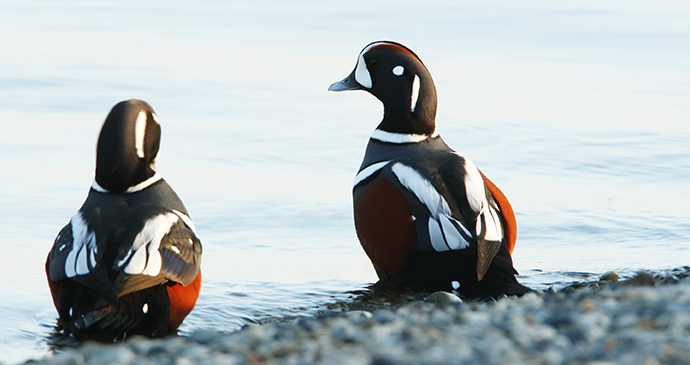 With a layer of air under their dense plumage harlequin ducks are exceptionally buoyant, but also well insulated against the cold © tryton2011, Shutterstock

These are sea ducks hardened to a life in turbulent, cold waters. Strikingly decorated, the drake is mostly slate blue, spotted and striped white with chestnut flanks. The duck is suitably drab for camouflage at nesting time, when she chooses a well-sheltered place in dense vegetation or under rocks, never far from a fast-flowing stream nor the open sea. The coast of the Bering Sea is their stronghold, and maybe a million breed in the Aleutians, plus perhaps 3,000 in northern Iceland. 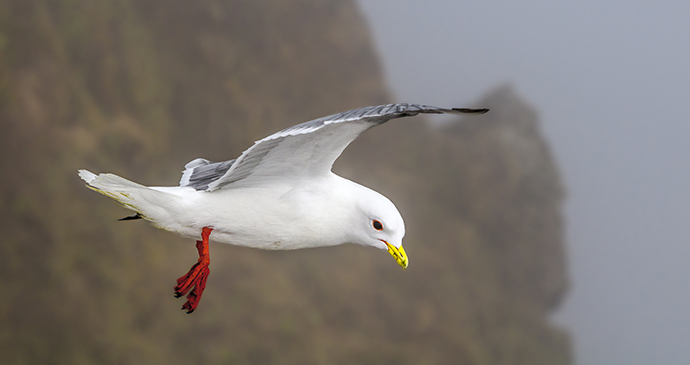 Red-legged kittiwakes plunge or dip for small fish and squid over the edge of the cliff shelf © Nick Pecker, Shutterstock

The Bering Sea is home to the world’s entire breeding population of red-legged kittiwakes – perhaps 100,000 pairs. Sadly their numbers are declining and they are a decidedly vulnerable species. Reasons for the decline are not too clear, but changes in food supply, increased predation by foxes and commercial trawling are probably involved. While they once normally laid two or three eggs, they now seem to stick at one. They are not yet formally protected. 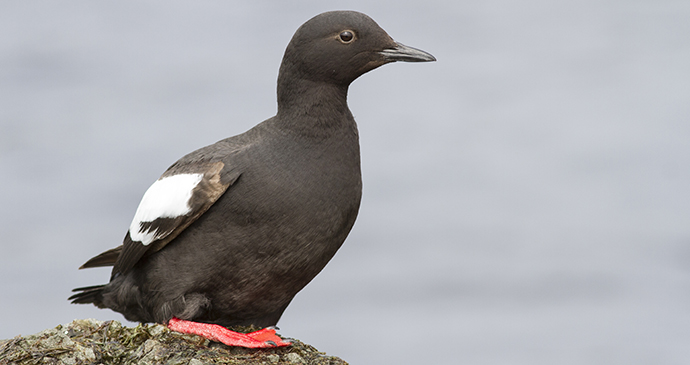 The pigeon guillemot makes its home along a rocky coastline with cliffs and slopes offering crevices and cavities for nest sites © Tarpan, Shutterstock

The pigeon guillemot is common in the Bering Sea, its stronghold, especially in the Chukchi Peninsula. Although it often congregates in small colonies, it is less obviously sociable than other auks. Its black-brown body with a distinctive white patch broken by black wedges distinguishes it from the black guillemot, which overlaps with it at the northern end of its range. It has elegant red legs and a black bill with a red mouth.

It makes its home along a rocky coastline with cliffs and slopes offering crevices and cavities for nest sites. Unlike other auks, it always stays close to inshore shallow waters, where it dives to scour the bottom for molluscs and crustaceans.

The Bering Sea is the stronghold of several varieties of auk. Among the most distinctive are the parakeet auklet, a dumpy bird with an upturned reddish bill, and the crested auklet, which is slate-grey, with a stubby orange bill and an impressive thick crest. The crested auklet is also know for its highly developed flocking behaviour, indulging in sensational aerial displays, clouding the evening sky. 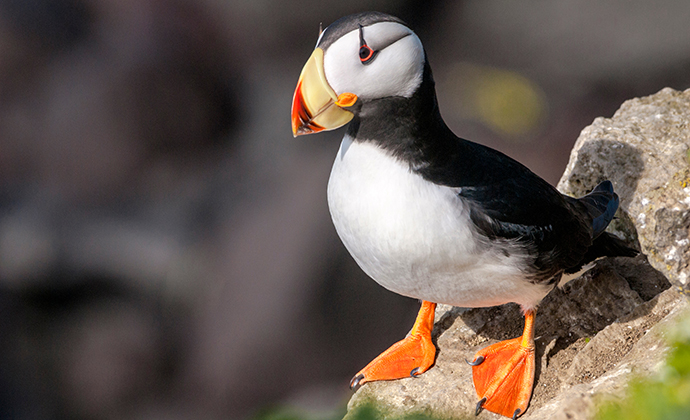 The horned puffin takes its name from the unique fleshy ‘horn’ above its eye © Nick Pecker, Shutterstock

Two puffin species are also common and abundant on sea coasts and offshore islands in the Bering Sea/Aleutian region – the horned puffin and the tufted puffin. Both Pacific puffins have white faces; the horned puffin has a black collar but is white underneath whereas the rest of the tufted puffin is all black. Horned puffins have a large triangular orange-red and yellow bill, but you need to be very close to see the fleshy ‘horn’ above the eye. Tufteds have an orange bill and long yellowish tufts hanging back from the eye. 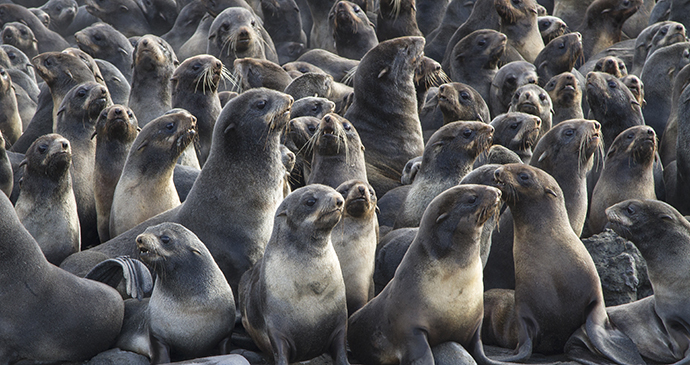 Largest of the world’s fur seals, the stocky bulls are much larger than the cows. The total population is well over a million, of which two thirds are found around the Pribilofs and the Commander Islands. The older males are first to arrive in May at the ancestral rookery in order to lay claim to the prime breeding places, the females following and giving birth soon after. The males fast throughout the season, mating with their harem of anything up to a hundred females. Young males hang around close to the action, watching for a chance to score. 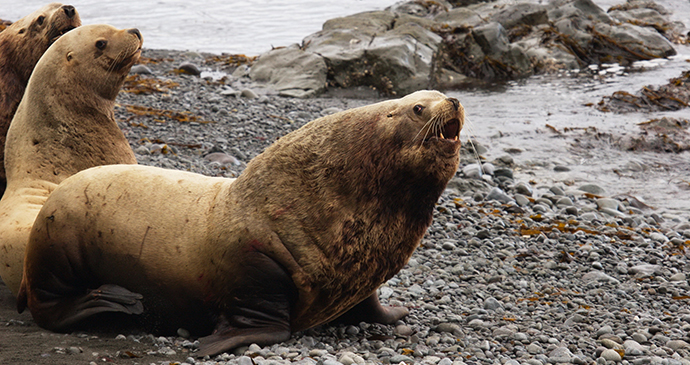 This is almost the largest of all eared seals – only the walrus is larger. The males are robust, with a short blunt snout and an impressive mane. The females are blonder and smaller. Like the fur seal but unlike the true seals, the sea lion can rotate its hind flippers, lift itself up on its fore flippers and run.

Their breeding range is similar to that of the fur seal, with traditional rookeries congregating on the rocky shores of isolated islands, where the males are highly aggressive, holding territories where females are not held in a harem but have a degree of freedom to wander.

Want to find out more about wildlife in the Arctic region? Check out our comprehensive guide: