Uruguay takes great pride in having the longest carnival season of any country, over 40 days long, although it has to be said that, between the opening and closing parades, the activities are largely confined to various open-air theatres and stages across Montevideo.

The prelude to carnaval season, usually on the last Thursday of January, is a grand parade, when huge floats, giant puppets and groups of murga performers proceed for 5 hours along Avenida 18 de Julio, the city’s main axis. A week later (on the first Thursday and Friday of February) Las Llamadas (The Calls) is a procession of 40 different comparsas or cuerdas (candombé drumming groups) each night through the Barrio Sur and Palermo.

The 40 days of Lent are occupied by performances on tablados or temporary stages in the various quarters of Montevideo and in the Teatro del Verano, the open-air theatre near Parque Rodó, where a competition is held to choose the very best acts. The climax comes the weekend before Shrove Tuesday and the start of Lent, but it may not finally wind up until the following weekend, especially if rain has caused delays. 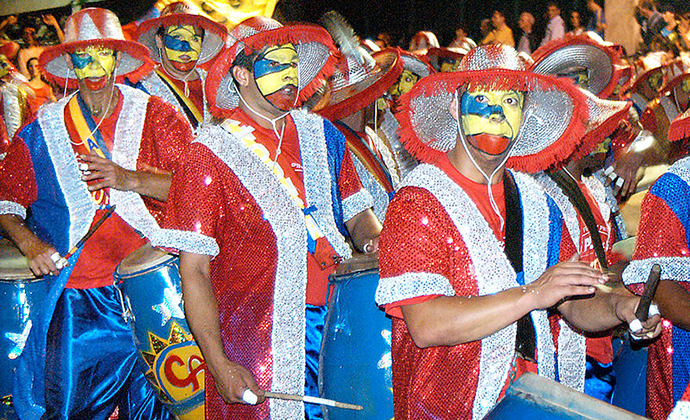 Uruguay’s Carnaval has various sources: in classical antiquity, the Church calendar, Venetian carnival, the commedia dell’arte, and in the Bantu and Angolan Benguela cultures brought by African slaves. Candombé remains especially associated with the Afro-Uruguayan community, although the majority of drummers nowadays are of European descent, with an increasing number of female drummers.

Many slaves were brought from Africa to Montevideo after 1750, developing the habit of meeting to dance on the shore at weekends, gatherings known as tambos or tangos. These were restricted after 1808 by a fearful white population, but continued in a more discreet form. Candombé was first recorded in 1834, then banned in 1839, although the Afro-Uruguayan population was in any case declining due to assimilation and civil wars. The first drumming comparsas were founded in the 1860s by Afro-Uruguayans, and in 1876 a blackface comparsa, Los Negros Lubolos, was founded by a group of upper-class young white men. Imitating the Afro-Uruguayan groups, they were a great success at that year’s Carnaval and paved the way for candombé to enter the main stream of white Uruguayan culture. Even now, a white drummer is known as a negro lubolo. 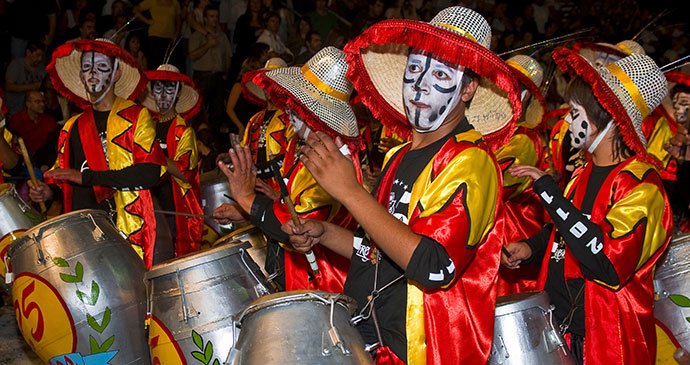 In the early 20th century there was massive European immigration to Montevideo, with many poor immigrants living in the crowded conventillo tenements of Barrio Sur and Palermo, learning candombé drumming from their Afro-Uruguayan neighbours. Meanwhile the banner-twirling which has also become a major feature of Las Llamadas seems to have Basque origins. The most important comparsas (many of which survive today) were racially mixed, and blacks and whites contributed together to creating a wholly Uruguayan art form, which has seen its popularity grow steadily since the 1950s. The drummers are preceded by scantily clad dancers (mostly female…) and costumed characters such as la mama vieja and the gramillero.

At the start of the 20th century, the festivities were extended to over a month, and the carnival parade, which used to wind through the Ciudad Vieja, was moved to Avenida 18 de Julio. In 1958 the Las Llamadas procession was created as a separate event – the painter Rubén Galloza had wanted to revive the traditional Afro-Uruguayan celebrations between Christmas and Epiphany (a time when slaves were given more freedom) but an all-white municipal commission decided to add it to Carnaval. In the 1990s the drumming became even more popular, spreading into the middle-class suburbs of Pocitos, Buceo and Malvín.

The other distinctive form of carnaval is murga, a kind of musical theatre with bass drum, snare drum and cymbals backing up to 17 male singers with painted faces, colourful costumes and unique harmonies. Each neighbourhood has its own troupe (known as parodistas), developing a new show each year and performing on temporary stages across the city. With its Spanish roots in Cádiz, murga had appeared in Montevideo by 1910 and soon became a central part of carnaval, lampooning public figures and satirising current society and politics, while also appealing to children. Women and the young are now increasingly involved, and latex and polyurethane have opened up new possibilities for masks and costumes, with more and more outlandish punk and SM features. The best troupes are now full-time, spending much of the year visiting schools and village halls across the country. 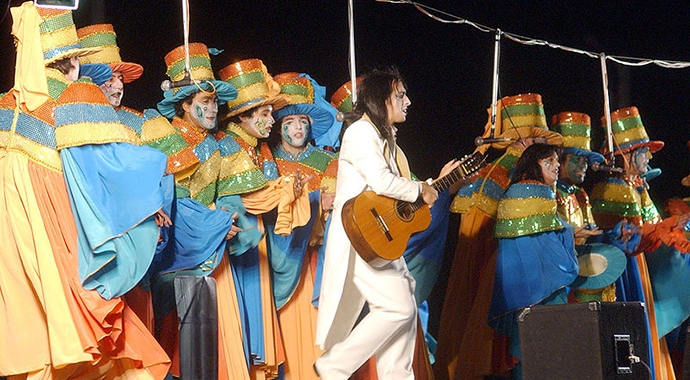 Montevideo’s Carnaval is typically Uruguayan and has relatively little in common with the slick dance performances by the perfectly honed athletes of the Brazilian samba schools (although these can be seen in the carnival of Artigas, on the Brazilian border) and, despite the satire of the murga shows, the carnival as a whole has a sort of small-town innocence about it.

Even if you can’t be in Montevideo for Las Llamadas or Carnaval, you’ll learn a lot from visiting the Museo del Carnaval, near the Mercado del Puerto in Montevideo’s old town