Thousands of years ago the hunter-gatherers of the Siberian coast pioneered east across the Bering Strait to colonise Alaska and northern Canada, eventually finding themselves in Greenland. Coming the other way, in the 7th and 8th centuries, Irish monks may have been the first Europeans to penetrate north and west. They sailed sturdy ox-hide curraghs and founded communities in the Hebrides, the Faroes and in Iceland, paving the way for a North Atlantic ‘stepping stone’ passage which may have taken the first Europeans to North America. Certainly the Vikings of Scandinavia were not far behind, exploring and colonising in the 9th and 10th centuries, sustained by plentiful fish and seabirds. They established permanent colonies in Greenland, before penetrating even further west to settle in Newfoundland. In the 14th century the Basque whalers who hunted sperm and right whales in the Bay of Biscay started to explore further into the North Atlantic and established themselves on  the coast of Labrador. Much later, British and Dutch fishermen were to learn from the Basques, taking their techniques north, and the rot set in for what was once a great stock of whales. 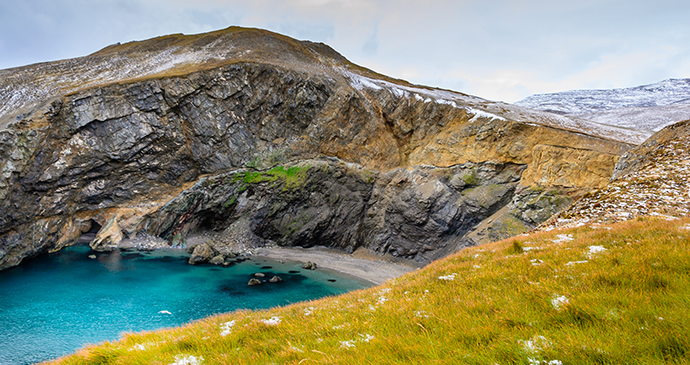 William Barentsz discovered Bear Island in 1596, on his third voyage in search of the putative Northeast Passage © Tetyana Dotsenko, Shutterstock

Arctic wildlife flourished in abundance until the great 16th-century age of exploration and discovery. Explorers were not, of course, exploring solely for the love of knowledge. The spirit of scientific curiosity led naturally to the pursuit of monetary gain, with merchants anxious to discover more profitable routes to the East. The land route from western Europe to China was difficult and dangerous, while the sea route via the Cape was long. Therefore the prospect of a northern sea route was attractive enough to encourage speculative exploration. In 1586 John Davis set sail from Dartmouth in Ellen for his third attempt on ‘the search and discoverie of the northwest passage to China’. Crossing the strait by this time named after him, he reached into Cumberland Sound before having to turn home. But his favourable reports encouraged others to attempt the passage through to the Pacific. This was finally achieved by the Norwegian, Amundsen, in 1905 with Gjøa.

It was the Dutch who first explored the other prospective trade route to the Pacific. In 1594, the last decade of the 16th century, the greatest of all Dutch seamen, Willem Barentsz, sailed in Mercury in search of the putative Northeast Passage. By this time the Dutch already had a thriving commerce in furs and timber with the Russian port of Archangel. Barentsz reached Novaya Zemlya in the sea which is now named after him, but turned back in the face of impenetrable ice. On his third attempt, sailing from Amsterdam, he discovered Bear Island and Svalbard, reaching Spitsbergen on 17 June 1596.

In 1607 the British navigator Henry Hudson sailed north in Hopewell, again aiming to find a sea route east towards China and Japan but hoping that it was possible to sail across the top of the world. He explored Svalbard and discovered Jan Mayen, at the same time finding a wealth of whales. Inevitably trade, in the form of whalers and sealers, followed the flag. Bowheads were the main prey, but bears, seals and walruses, to say nothing of countless numbers of seabirds, were all grist to the mill. Whale oil was greatly in demand in western Europe. Known as ‘train-oil’, it was used in making candles, for lamps, lubricants and soap, and, at a later stage, for street lighting.

At first the whalers caught and processed their catch at sea, learning from the Basques. But by 1613 a number of vessels were exploring whaling possibilities on the shores of Spitsbergen. Hostilities between English and Dutch ended with an agreement whereby the British whalers from Hull worked the more convenient southerly waters and the Dutch took the northwest.

The Dutch were first to set up a shore station, on Amsterdam Island. Smeerenburg – Blubber City – was established around 1620. At first the whalers lived in campsite conditions, but as time went by paved streets served a dozen or so sturdy houses. There were eight double ovens in the tryworks. The settlement was protected from the marauding Brits by the cannons of a small fort. 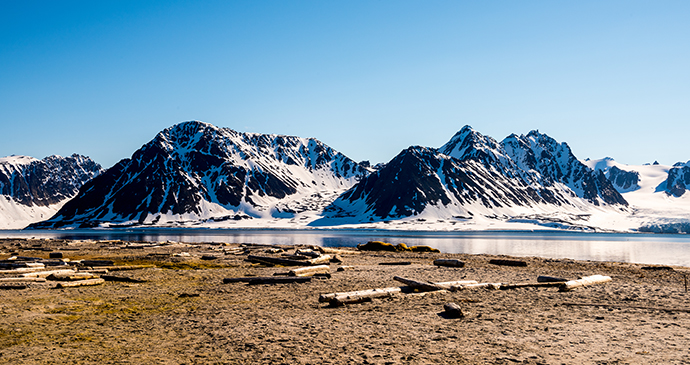 Amsterdam Island was the home of the first Arctic shore whaling station, established by the Dutch around 1620 © Anton_Ivanov, Shutterstock

After the disastrous experiences of a few pioneering winterers, the station was operated by a summer population of only about 200. Most of their food came with them from the Netherlands, but it was of poor quality, made palatable with a liberal spread of mustard. To remain healthy the whalers took advantage of local fish and birds, eggs and the occasional reindeer. Nearby colonies of little auks deposited quantities of nitrogen-rich excrement on the scree slopes, nourishing the scurvy-grass which protected them from disease. Ice conditions changed for the worse in the mid 17th century and the whalers were forced
to abandon the shore station, flensing the whales alongside their ships and taking the blubber back to Europe for cooking.

Even so, the enterprise was hugely profitable. Between 1675 and 1721 the Dutch employed a total of 5,886 ships and took 32,907 whales, at an average value of £900 each – an enormous profit. By the early years of the 18th century there were more than 200 whaling vessels, mostly Dutch, but also British, German and Danish, chasing the bowheads.

The pressure of hunting was devastating and the bowheads were unable to take the strain; in two hundred years they were brought near to extinction. By the middle of the 18th century the whaling station at Smeerenburg was abandoned (today only the remains of the ovens are to be seen). The whalers turned their attentions to the whale stocks of the Davis Strait and Baffin Bay off West Greenland, a fishery which flourished well into the 19th century.

For more information on the wildlife discovered by these great Arctic explorers, check out our comprehensive guide: