Unique to Ghana’s central coastal region, posubans – a name deriving from the English word ‘post’ and Fante ‘ban’ (fortification) – are the eye-catching and often elaborately decorated concrete shrines that dot the urban landscape of many Fante settlements, reaching something of a garish zenith in such ancient trading centres as Elmina, Anomabu and Mankessim. 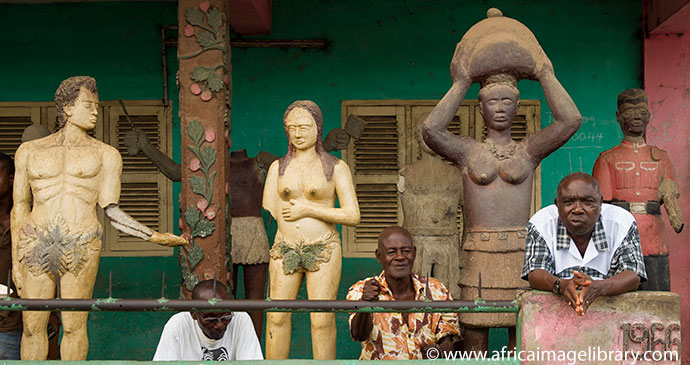 These shrines are the work of asafo companies, the patrilineal military units that are a feature of most Akan societies. Asafo companies are traditionally responsible for the defence of their town, but these days they are perhaps more significant for their ceremonial function and for their activity and influence in the arts and local politics. Most towns in the region have between five and 12 rival asafo companies, each identified by a number, name and location. Generally, the lower the number of the unit, the earlier it was established, and the more influential it is on the chieftaincy. In Anomabu, for instance, a new paramount chief is always sworn in at Company #1’s posuban, which is adorned with a symbolic padlock and key.

Many posubans originated as storage houses, used to hold not only arms, but also the company regalia, and they are often decorated in a manner that is both richly symbolic and – to the outsider – decidedly cryptic. The extent of this decoration varies enormously from town to town. You could easily walk right past most of Cape Coast’s posubans without noticing them, since at best they are decorated by one small mural. In Elmina and Mankessim, by contrast, the most important shrines are multi-storey affairs decorated with up to ten life-size human forms, and complex enough in their symbolism to keep you guessing for several hours.

Perhaps the most surprising thing about posubans is that, despite their antiquity and uniqueness to the Ghanaian coast, they owe little to any other African artistic tradition. Indeed, were you to show a photograph of a typical shrine to most outsiders, they would be hard pushed to guess in what continent it had been taken. One renowned shrine in Anomabu just about conjures up Africa by depicting lions and leopards (sitting somewhat incongruously alongside a whale and several surreal antelope-like creatures), but the same cannot be said for the town’s best-known posuban, which is several metres long and built in the shape of a European warship. Others depict European sailors and overgrown clocks, while one startling example in Elmina recounts the story of Adam and Eve. This strange melding of exotic and indigenous influences is a fascinating reflection of a full five centuries of European and African interaction in coastal ports such as Elmina and Anomabu.

Despite vigorous questioning of local elders, we were unable to establish when, why and how these elaborate posubans were constructed. Most of the shrines we saw look as if they took their present form in the post-independence era, and we’ve been told that the ‘Adam and Eve’ posuban in Elmina was first made public in the mid 1960s. Another shrine that can be aged is the one in Saltpond, which, somewhat contradictorily, is dated to 1685. Our understanding (open to correction) is that this apparent anomaly reflects the fact that while the actual posuban sites are often centuries old, the exterior is resculpted every
few decades, to reflect changes in fashion, and to incorporate any important recent additions to the long list of symbols and proverbs associated with the individual asafo.

Details of important individual shrines are given under the town where they are found. For most short-stay visitors, the obvious place to go posuban viewing is Elmina, though the selection found in Anomabu is arguably more varied and interesting. The main shrine in Mankessim (traditionally regarded as the first capital of Fante) is probably the largest and most elaborate in the country, and the one in Saltpond among the most bizarre. Most of the shrines lie on main roads so viewing them is free, but a donation of around US$1–3 will be expected if you want to take photographs.

Order our Ghana guide now and receive 10% off: