Gingerbreads are Port-au-Prince’s most emblematic houses. They’re instantly identifiable, usually tall buildings with steep metal roofs, and wide porches and balconies decorated with fine latticework. In short, they look like something from a Caribbean fairy tale. There are about 200 in Port-au-Prince, concentrated in the areas of Bois Verna, Pacot and Turgeau. 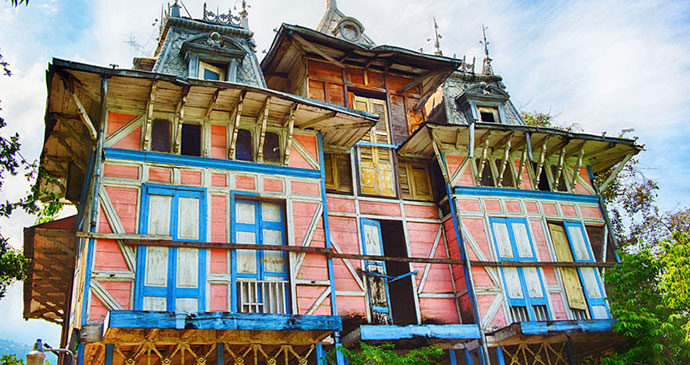 The first gingerbreads were built following the construction of the National Palace in 1881 by George Baussan, who introduced new themes into Haitian architecture: wood frames lined with brick, carved wooden façades and high ceilings and windows with large galleries. Although this version of the National Palace was destroyed in 1912 (by an accidental gunpowder explosion – the palace also served as a military magazine), the style was instantly copied. Of the gingerbreads of this period, the most famous (and readily accessible to modern visitors) is the Hotel Oloffson (pictured below), built in 1887 as a private residence, turned into a military hospital during the US occupation and finally converted to a hotel in 1935. The majority of Port-au-Prince’s gingerbreads were built by just three men: Baussan, Léon Mathon and Joseph Eugene Maximilian, architects who returned to their native Haiti in 1895 after training in Paris. They refined and modified the gingerbreads to create some truly Baroque buildings perfectly suited to their environment, decorating them with turret roofs resembling witches’ hats or lacy filigree ironwork, with designs inspired by Haitian folk-art and vèvè symbols from Vodou. As well as beautiful, the houses were practical, with shady porches, high ceilings directing hot air above the living spaces, and plenty of side-windows to catch the breeze. 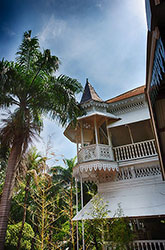 The gingerbread boom came to an end in 1925, when the Mayor of Port-au-Prince banned wooden construction due to the risk of fire. Although once the province of the rich, many descendants of the original owners can no longer afford to maintain the properties, with the result that some are falling into severe neglect (the wood is particularly termite-prone). Despite this, the gingerbreads weathered the 2010 earthquake surprisingly well – around 5% of them were damaged or collapsed compared with 40% of concrete buildings in Port-au-Prince (of those that were seriously damaged, most had undergone bad restorations that compromised the flexibility of their wooden frames).

In 2010, the World Monument Fund carried out the first comprehensive reviewof the gingerbreads, in partnership with the cultural foundation Fokal and ISPAN, Haiti’s national heritage body. Fokal ultimately hopes to have the square mile that contains most of the houses turned into a heritage area, a project that could cost US$10 million, although there are many hurdles to overcome before that can come to pass – from the legal status of the private buildings (Haiti has no equivalent to the UK’s system of listed buildings or the US’s National Register of Historic Places) to the hard economics of protecting the buildings (which often sit in large grounds) from the covetous wallets of developers.

Modern constructions like high security walls have masked some gingerbreads from view, but it’s still possible to make a worthwhile tour. One of the highest concentrations is found along Avenue Lamartinière in Bois Verna, including the twin-steepled no. 15, no. 32 built by President Tancrede Auguste in 1914, the slimfit no. 52, and the grandly roofed no. 84. Le Manoir at 126 Avenue John Brown is another fine example, along with the Peabody House in Pacot. And, of course, you can always take a drink on the veranda at the Hotel Oloffson.