Held annually in July, the great Naadam Festival is a thrilling three-day sporting event that has been happening for centuries. In Genghis Khan’s time it happened at different times of the year, particularly in summer. Since 1922, when Sükhbaatar ordered a naadam to mark the first anniversary of the revolution on 11 July, it has been held annually – from 11 to 13 July. The festival highlights Mongolia’s ‘three manly sports’ – horse racing, wrestling and archery. It continues to bring together Mongolia’s sporting men and women from the remotest regions to compete at national level in Ulaanbaatar. It is also a celebration of the ordinary people – herders who ride into town and urbanites who leave their flats and offices to watch the games. The combination of people and events presents an unforgettable spectacle to the visitor: colourful silken tunics, fresh-faced nomads, thundering hooves, flying arrows, wrestling bouts, which thrill and entertain thousands of spectators. Mongolians like to show off centuries of tradition and celebrate the moment with plenty of airag. It is a time when people remember their glorious past and are proud of their equestrian skills, the stamina of their horses and the strength of their arms. 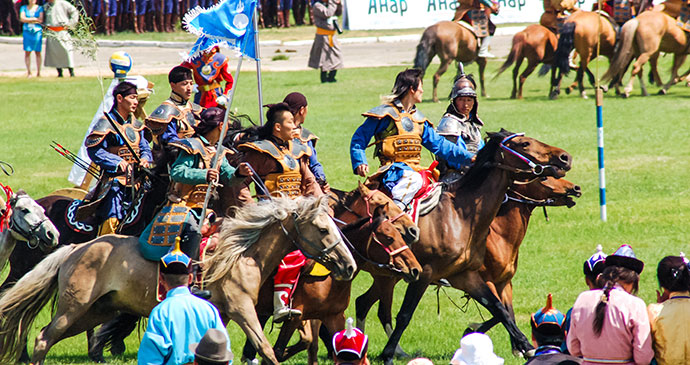 Although the main events are known as the ‘three manly sports’, women also compete (except in the wrestling contests) with just as much courage and daring as the men. These are the qualities that over the millennia produced the warrior nation of Genghis Khan. The root of the word ‘naadam’ (game(s) festival) comes from ‘naadakh’, meaning ‘to play’ or ‘to have fun’. Outside the capital, smaller games, or mini naadams, happen throughout the summer months. Visitors often come across them unannounced, which is a bonus, since you can get much closer to the action than you can during the national games held in Ulaanbaatar.

The history of the games began centuries ago at the time of the Hunnu or Hun Empire (3rd century bc) when hunting and other events were wilder and more primitive. Later, during the Mongol Empire (13th–15th centuries) the games lost some of their original glamour and impetus when the court of Kublai Khan moved to Peking and when the Mongol Empire disintegrated. However, in the 17th century the tribes regrouped at Shireet Tsagaan Lake to celebrate the Danshig Naadam – a naadam of seven banners – accompanied by Buddhist religious ceremonies. The latter were stopped in 1921, making it a ‘games only’ festival.

In the 21st century there is a renewed interest in traditional folk activities. In the capital, towns and provincial centres, as well as in lonely gers in the remotest areas, you will, most likely, discover a lifestyle, arts and music that reflect the true national identity and culture of the Mongol people.

The opening ceremony raising the horse-tail banners in the presence of the president begins at 11.00 at the Naadam Stadium. You need tickets to get into the stadium events, best booked in advance through a tour company. The horse races are held just outside the capital, at Yarmag, in a broad valley about 10km along the road to the airport – races begin at one end of the valley and contestants gallop the required distance towards the crowds who watch at the finishing post. There are plans in the future to hold the horse races at alternative locations. There is no cost. Buses or taxis are available from the city centre to take you there. If you are travelling outside an organised tour with your own car and driver, you will need a vehicle permit (obtained in advance from the traffic police in Ulaanbaatar). The driver should be able to arrange this. Wrestling competitions begin at noon in the central stadium and archery is held in another open stadium nearby.