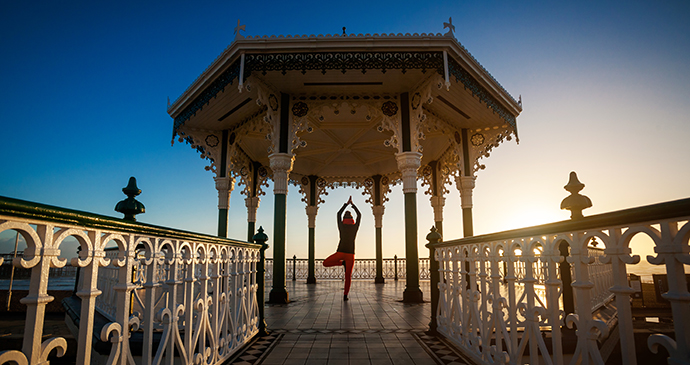 Walking into the class later, the heat gave me an instant slap in the face. But it was not sauna-hot – this was humid rather than dry heat. And it was only going to get more humid I realised, as the nine of us present for the class contributed our evaporated body fluids to the soup. Hot yoga classrooms are usually between 35 and 42 degrees; I moved slowly and settled onto my mat.

Almost as soon as the class started, my liquid self made its presence felt. I wasn’t used to sweating during my yoga practice, and I liked the dry competence of the sequences I usually did. For me, sweating while practising yoga meant you were struggling. Despite this ultra-heated practice room, at the first prickle down my back I felt embarrassed.

I comforted myself that it was not perspiration being pushed out of my body by exertion so much as something being pulled out by the oven of the classroom. But nevertheless, when the prickling turned to a bead making its way down my spine I was mortified. I knew that sweating was natural; I didn’t think I was so oppressed as to believe that women should only ‘glow’, and yet I felt like I had done something disgusting here, like breaking wind in public.

No matter that I was not the only one starting to gleam – glancing up I saw that the other participants in the class also had slippery skin and damp clothes. As the practice continued, damp became drips; drizzled became drenched. The ocean pounded on outside, and the windows trickled water on the inside. I hadn’t realised the experience would be quite so dramatically cathartic; after twenty minutes we were swimming-costume-wet. I noticed in the mirror that my white T-shirt was regrettably translucent. Sweat ran down my face, and then we went into Downward-facing Dog splits and the sweat ran back up my face….The burst blister on my foot started to sting with it and my whole body seemed liquefied. When Sharon, our teacher, told us to hold each elbow in the opposite hand behind our backs (if you’ve never tried to do this, have a go right now and you’ll understand that it’s more challenging than it sounds), my hands flailed behind me and couldn’t grip anything, fingers slithering across forearms like slippery muscular fish which resisted my grasp.

I told myself that other cultures organised opportunities for people to sweat together – from Moorish hammams and Roman baths to Finnish saunas – so this was more normal than it felt. Certainly, the other participants seemed unbothered by turning themselves into human fountains, and by the synchronised pitter-patter of our sweat onto each of our mats. Sharon was even brave enough to come around and offer adjustments to the poses; I imagined her having to take the firm stance of a Turkish oil wrestler to do so with any effective hold.

Want to read more of Elizabeth’s yoga experiences around the Britain? Take a look at her book, Unlikely Positions (in Unlikely Places):