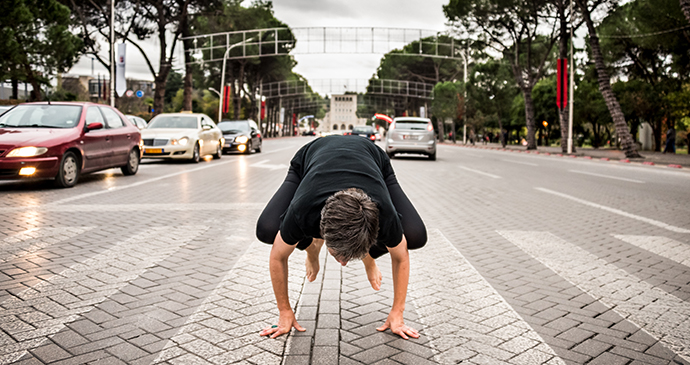 Of all the classes I took, this was the one where the results lasted longest. I’m used to momentary euphoria after a yoga class, as endorphins and lactic acid rush in a heady cocktail through my body. I’m used to walking taller and more bouncily, and to feeling stretch – or ache – in my muscles the next day.

But after the Iyengar class the effects lasted for at least three days of feeling like I was living in a new body, an instrument of greater precision and greater power. In those days just doing ordinary things like taking steps along the street felt like exercises in poise and that there was the potential for more.

I made attempts at poses I had never tried before – in Plank I moved gecko-like by stretching out one arm to the side at a time; I even sank deep and trusting into the painful squat from which one launches into Crow, fixed my knees into my biceps and kicked slowly up with my feet, daring myself not to fall onto my skull. It was so obvious that falling onto my skull was what I was most likely to do, but I remembered Chris’s reference to the ‘conversation between your brain and your body’ and tried not to place quite so much value on my precious, fragile, threatened brain. To my amazement and exhilaration, my body took over and I managed to hold myself like a louring dark bird in Crow pose for a few controlled, astounded seconds, before bringing my heels back down to earth.

Want to read more of Elizabeth’s yoga experiences around the Britain? Take a look at her book, Unlikely Positions (in Unlikely Places):