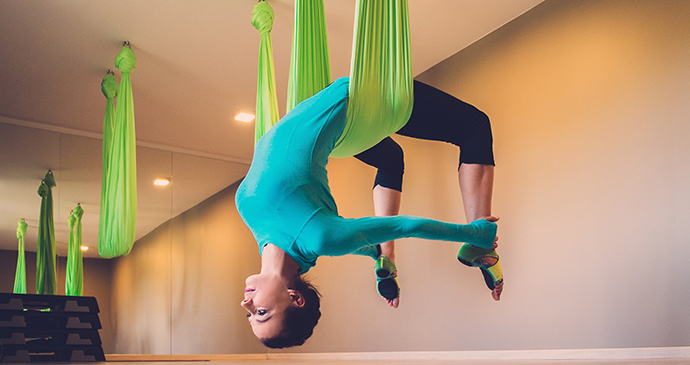 The buildings thinned out, and the land got cheaper –  though not for long: I passed a construction site promising to be soon transformed into a ‘luxury gated development of homes, apartments and coachhouses’. For now, the place was inhabited only by wood pigeons and wild mallow. Round the corner was the entrance to the small industrial estate where I found the Fitness Hangout.

Walking into the studio was like walking backstage at a theatre. There was the same daunting mixture of fairy tale and fire hazard – a place swagged in silk, in the middle of which, like a health and safety inspector briefly allowed into the seraglio, a practical body stood on a ladder checking carabiners.

Each swathe of material hung above a mat, and women were taking their places each at one of the mats. I wondered which of the half-a-million-pound homes they had come from, but they were reassuring to look at; they looked a bit like me – of similar age and build – but just better. They didn’t have the Instagram yoga bunny look that I knew was unattainable for me unless I had a skeleton transplant – they were strong and supple and I could imagine that one day, with a lot of effort, I could be like them. I particularly liked Ruth, who had a bag saying ‘I do yoga because punching people is frowned on’. Immediately I spotted the one with blue hair and tattoos. There had been at least one woman with blue hair and tattoos in every yoga class I had attended. This felt like increasingly familiar territory.

There were nine women in the room and they all used each other’s names as they chatted. One was getting married and they swapped suggestions for wedding-day make-up. I was reluctant to join in. Then someone started a conversation about failing eyesight and I itched to mention the ‘fist monocle’ trick I’d been using where you can make small print more visible just by viewing it through your curled fist. Maybe I could be a part of this group?

And conversation moved on; the women exchanged stories of having used a yogic ‘neti’ pot for flushing out the sinuses with salt water and, less alarmingly, about the pub the previous night. Someone was sharing a recipe while another was telling the group how she was supposed to be moving to London but she didn’t want to because she’d miss this class. As I listened to this hive mind in action I started to understand why.

Want to read more of Elizabeth’s yoga experiences around Britain? Take a look at her book, Unlikely Positions (in Unlikely Places):