From scanning coastlines and clifftops for spectacular birdlife, to getting your own bird’s-eye view of breathtaking scenery on an inter-island flight, if you’re planning a trip to the Falkland Islands these activities should be on your itinerary.

For many wildlife lovers, the Falkland Islands are a dream destination. Here visitors can scan harbours for Commerson’s dolphin, search sandy beaches in the hope of seeing an elephant seal sprawled out, and maybe even spot an elusive orca. 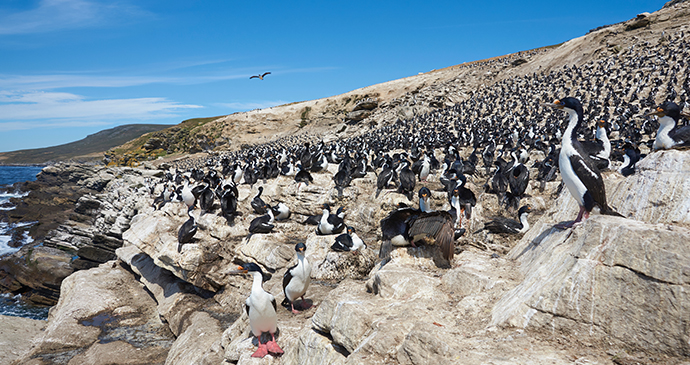 With adults toing and froing and the young begging for food, imperial shag colonies are constantly active and make for a lively spectacle © JeremyRichards, Shutterstock

For bird enthusiasts, many of the islands are home to colonies of imperial shag and black-browed albatross (70% of the world’s population breed here). A variety of species of waders, grebe, petrel and waterfowl are also abundant. And then, of course, there are the five species of penguin that breed annually around the islands’ coasts.

The light on the Falkland Islands can be a photographer’s dream, illuminating the clear blue skies, the deep blue sea and the abundant, extremely photogenic wildlife. Not every day is like that of course, but there are plenty of photographic opportunities. 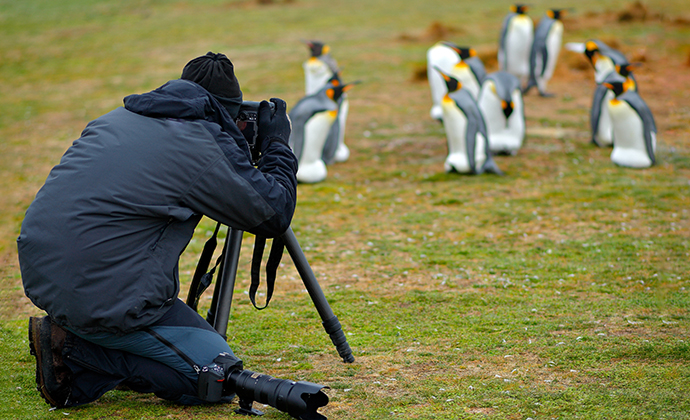 With subjects ranging from ever-posing king penguins to wide-open landscapes and colourful buildings, the islands are a photographer’s dream © Ondrej Prosicky, Shutterstock

The most frequently heard comments made by professional photographers visiting the islands indicate that they are glad they brought plenty of memory cards and they can often be seen every evening downloading and looking through the day’s photographs.

It’s possible to explore even the remotest corners on a scenic inter-island flight, operated by the Falkland Islands Government Air Service (FIGAS). This is also the quickest way to get between the islands’ settlements – it takes just 30 minutes to reach Bleaker Island from Stanley. 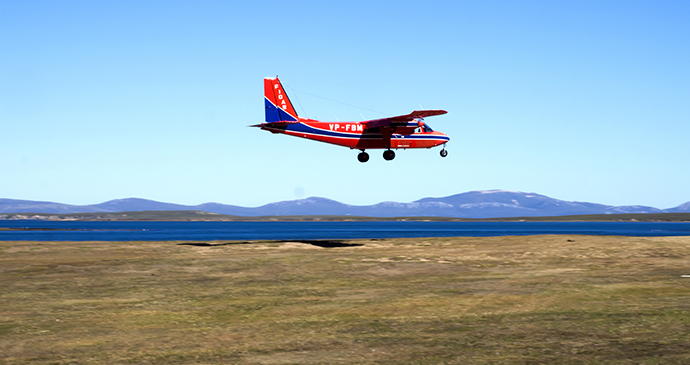 Planes operate from their base at Stanley Airport and can take up to eight passengers plus pilot. Schedules are organised on a day-to-day basis depending upon demand. Once all requests for flights have been made, a schedule is drawn up for the following day’s flights.

Port Howard is one of the main centres for fishing on the islands. The two most popular species of fish with anglers in Falkland are the sea (brown) trout, which was introduced between the 1940s and 60s, and the Falkland mullet. The former is found in the freshwater rivers, while the latter is found in tidal waters, often following the tide as it comes in over shallow ground. The most frequently fished rivers are the Warrah and the Chartres, with sea trout being the target fish. No licence is required to fish in the Warrah River, although there is a maximum of six fish per angler per day. 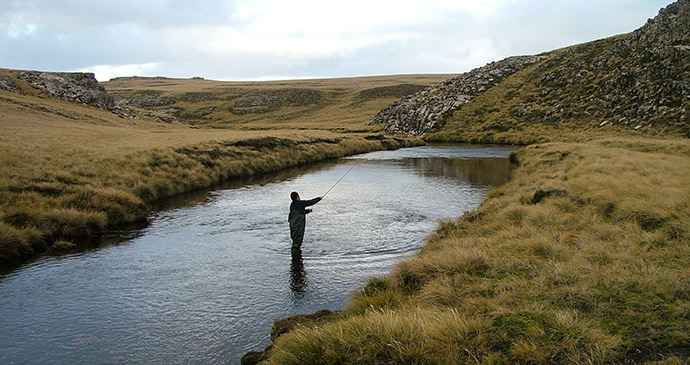 The fishing season is 30 September until 30 April, with the best times to fish being in September, October, February and March. It is also possible to fish in the river’s main tributary, Green Hill Stream, which is a few miles closer to Port Howard, or a little nearer to the lodge in Many Branch Creek. The Chartres River can be fished from Little Chartres Farm for around two miles onwards until the river starts to open out. Mullet can also be caught in many of the creeks around Port Howard.

Hiking is the ideal way to explore the islands. Those based in Stanley can lace up their boots and head out on a pleasant stroll to Moody Brook or Sapper’s Hill, which overlooks the town from the west. From here you can see Stanley laid out before you, over the harbour to Port William, and out over the South Atlantic Ocean to the south. 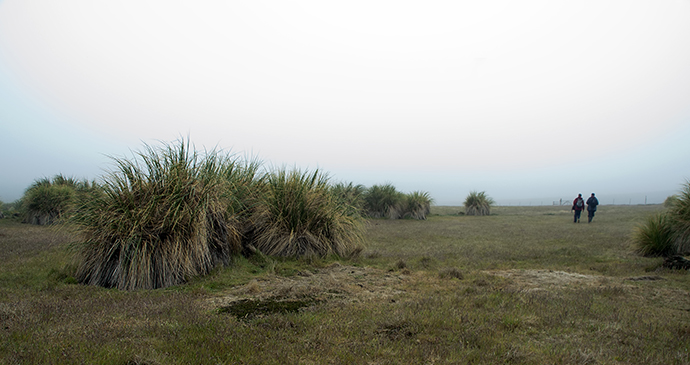 There are countless walking opportunities on the islands, making it an ideal way to explore © demamiel62, Shutterstock

There are also countless opportunities on the smaller islands to walk, surrounded by tussac grass, spotting wildlife as you go. A good pair of shoes or walking boots is essential – the ground in camp can be uneven and slippery in some locations.