The Falkland Islands are one of the world’s premier wildlife-watching destinations. Whether you want to spot a penguin in the wild or admire colourful flora, here’s our pick of the islands’ wildlife highlights.

Of the 59 species that habitually breed on the islands, most are water birds making use of the pools and lakes as well as the ample shoreline and good feeding offshore. There are three endemic species on the islands, the Falkland steamer duck so often seen cruising offshore in many locations across the islands, and Cobb’s wren found on rat-free islands.

The iconic bird of the islands, the penguin family are well represented, with five species nesting annually, plus the occasional vagrant from the Antarctic or sub-Antarctic islands. A visit to the king penguin colony at Volunteer Point on East Falkland is the highlight of many a trip to the islands. It is possible to get close views of the birds by sitting beside their main routes to the sea and waiting for them to come and inspect you.

Magellanic penguins are the first species of penguin that visitors will encounter. Their habit of breeding in burrows dug into the peaty soil results in rather more diffuse colonies than is true of other penguins. They are found on almost every coast with suitable nesting grounds and access to the sea, always avoiding cliffs and settlements.

The islands’ population of gentoo penguin is widespread. The Falkland Islands shelter 30% of this species’global population with an average of over 100,000 breeding pairs here in recent years; the gentoo is also one of the few penguins that stays around the islands in large numbers during the winter months. 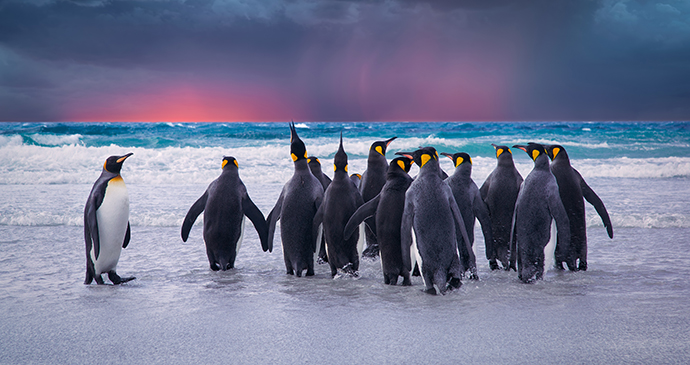 The rockhoppers are the smallest of the islands’ breeding penguins, yet they locate their rookeries on some of the most inhospitable coastline such as at Marble on Pebble Island, Kidney Island near Stanley and near the settlement on Bleaker Island. The colonies are noisy, smelly and marvellously photogenic.

Macaroni penguins are at the northern limit of their range on Falkland; they breed here in very small numbers, usually just a handful of pairs mixing in with the larger rockhopper penguin rookeries such as at Marble on Pebble Island, at White Rock, West Falkland and on Sea Lion Island with occasional hybrids occurring at some colonies such as on Saunders Island.

The only species of albatross to nest on the islands is the black-browed albatross with 70% of the world’s population breeding in the Falklands. Looking offshore from almost any vantage point on the Falklands one can see these birds, but to see them at their best a visit to a colony is a must. 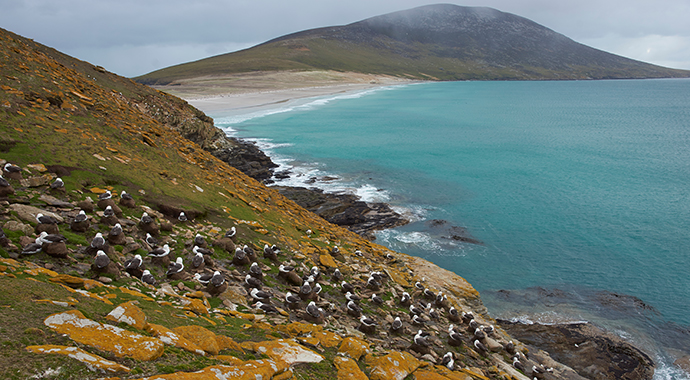 For the land-based visitor, the black-browed albatross colony on Saunders Island is the most accessible © JeremyRichards, Shutterstock

West Point Island, Saunders Island and New Island are home to some of the best-known colonies, and subsequently they are included in the itineraries of many of the Expedition cruise ships that call into the islands during an austral summer. For the land-based visitor, Saunders Island is the most accessible.

A walk along almost any shore on the islands will bring the visitor within binocular range of rock shags. Their cousins, the imperial or king shags, are not quite as numerous but can be found without too much difficulty. On land they can sometimes be seen roosting together on rocky outcrops, but tend to have differing requirements for choice of breeding site. 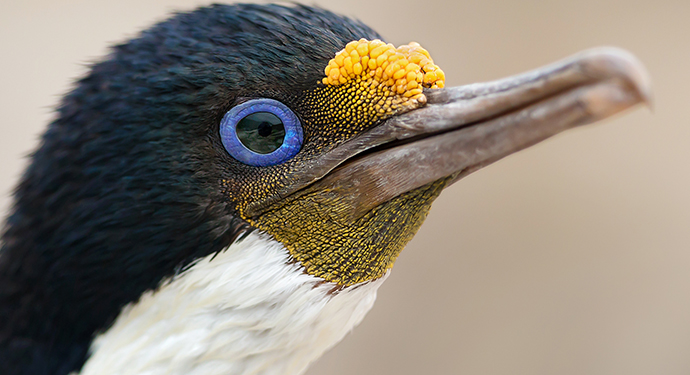 Rock shags are found building nests on cliff sides or on other steep slopes, whereas the king shags prefer to nest on flat open ledges at the top of the cliffs, often in association with rockhopper penguins.

Almost every bay or inlet on the islands has a pair or small group of Falkland steamer duck cruising around the shallows. This endemic species is one of two very similar species of steamer ducks that breed on the islands. It has been remarked that the only safe way to distinguish between the two is to wait until one takes off – this duck is stocky and big billed. 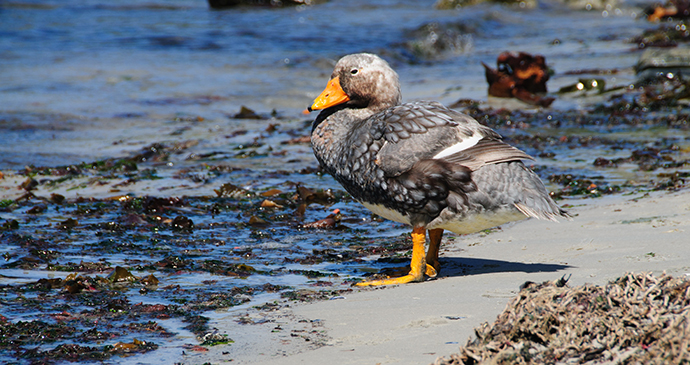 The endemic Falkland steamer duck, often spotted waddling along beaches, is one of several species of rare bird that can be seen across the islands © Goldilock Project, Shutterstock

Adults are often found in pairs or family groups spread over extensive kelp beds or spaced out along the shore, as they are extremely territorial. In late summer flocks of up to 200 immature birds may gather together in favoured feeding areas.

This is an endemic species closely related to the house wren of South and North America. Formally thought to have existed in large numbers, the presence of cats, rats and mice have restricted its range to those tussac grass islands upon which these predators have not been introduced. As a result the wrens are very common along the upper shore on islands such as Sea Lion, Carcass and Kidney but are absent over much of the archipelago. 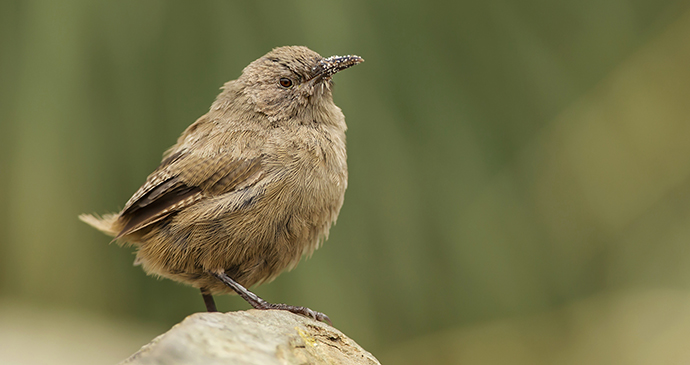 The smallest of the islands’ endemic birds, Cobb’s wren are found only on rat-free islands © Giedriius, Shutterstock

Initially they can be difficult to see but soon give themselves away with their rattling ‘chirr’ call as they hop around the boulders at the top of the beach, disappearing under one rock and popping out from under another a few feet away.

Watching some of the marine mammals that frequent the islands is one of the most memorable experiences on the Falkland Islands.

Rocky cliffs with accessible ledges near the water are the preferred breeding site for fur seal, most of which are found to the northwest and southwest of the islands. Breeding commences in early November when the bulls come ashore to claim their territories, followed by the females a few weeks later just before the pups are born. 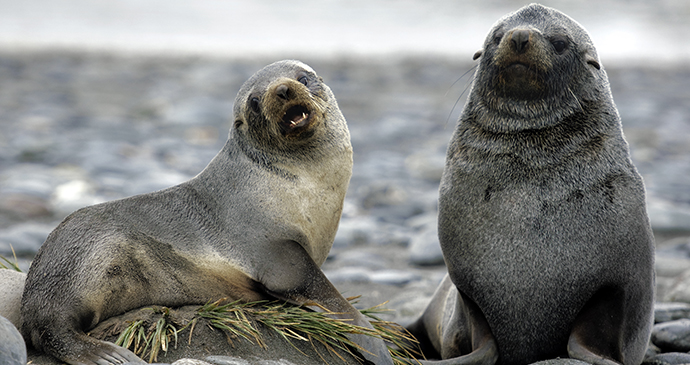 New Island is one of the most popular destinations to see fur seals © Moritz Buchty, Shutterstock

Colonies are rarely deserted during the year after the pups have departed, as different age groups and sexes are constantly present. New Island has the colonies most visited by tourists as elsewhere the seals keep to isolated rocky outcrops.

The best known, and most often visited, sites to see southern sea lions are at Cape Dolphin on East Falkland and on Sea Lion Island. Generally, they are shy animals who retreat when man approaches, but this cannot be guaranteed as they can move very rapidly and have a fearsome array of teeth. 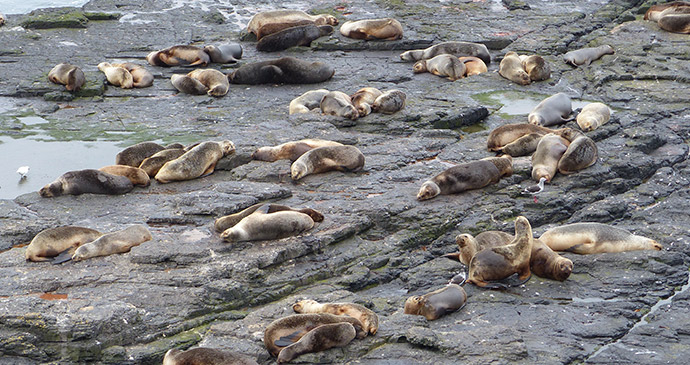 When hauled out on land, they can be seen resting upright with their head tilted slightly backwards; to all intents and purposes they seem to be fast asleep. Appearances are deceptive, as they are very aware of any nearby movement and react very quickly. Away from the 60 or so colonies on the islands, small groups and lone seals can be encountered almost anywhere, even close to Stanley.

Seeing a bull southern elephant seal for the first time is a memorable experience. Most of the species stay at sea during the winter months, although on favoured beaches it is possible to find the occasional animal slumped on the sand. 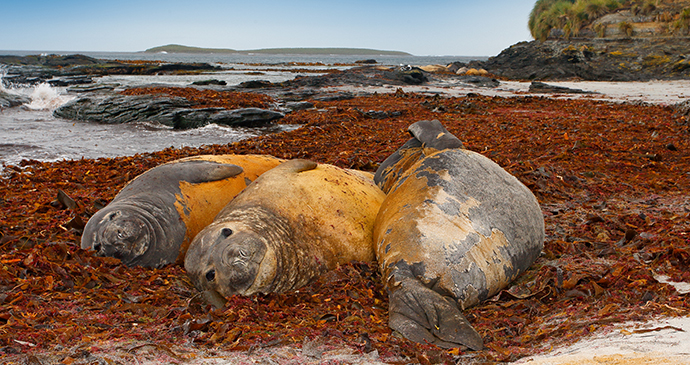 Being entertained by southern elephant seals is a highlight of any visit to Sea Lion Island © Ondrej Prosicky, Shutterstock

On land they are not the most elegant creatures, but they are sleek swimming machines, well adapted for diving to great depths in search of squid and fish. Sea Lion Island is the premier site for this species in Falkland with Carcass Island and Saunders Island also being breeding sites.

Many species of whale and dolphin have been recorded on the islands over the centuries. Southern right whales are regularly seen in some of the deeper waters around the outlying islands, in particular near New Island and at the mouth of Berkeley Sound as well as from Cape Dolphin at the north of Falkland Sound. Berkeley Sound is also a good site to look for sei whales late in the summer, especially from cruise ships as they enter Falkland waters. 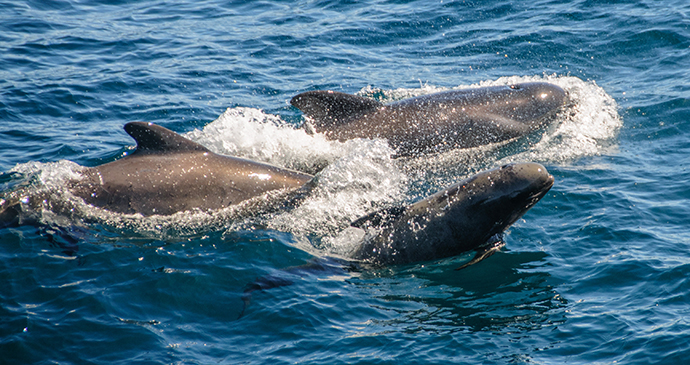 Long-finned pilot whales can be seen in small groups throughout the summer months © Goldilock Project, Shutterstock

Long-finned pilot whales can be seen in small groups throughout the summer months, and strandings of this species have occurred around the islands in the past with the most recent being on Pebble Island in the early 1980s. Many other species of whale have been seen from the cruise ships that pass through Falkland waters, including the very rare blue whale.

Two of the smaller cetaceans are frequently observed in the islands; Commerson’s dolphins and Peale’s dolphins can be seen on most visits. The former is smaller, about 6ft (1.8m) long, and prefers sheltered waters, often playing in the bow wave of boats entering harbour. Port Howard and the Narrows in Stanley have been excellent places to see and photograph these attractive black-and-white dolphins as they speed alongside the boat. 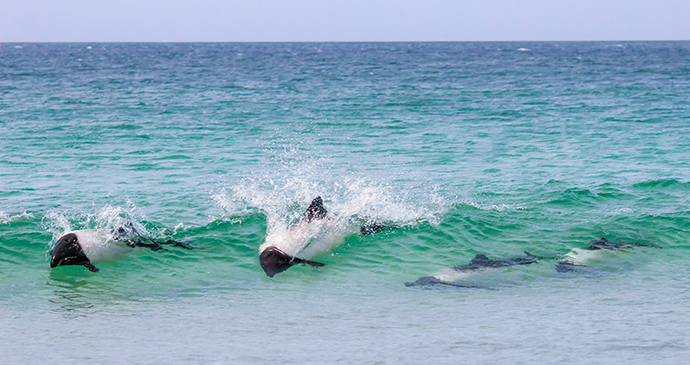 Commerson’s dolphins can be seen on most visits to the islands © fieldwork, Shutterstock

Peale’s dolphins are larger, up to 8ft (2.5m) long, and are generally much more lethargic swimmers, although they experience moments of frenzied activity, leaping out of the water and splashing around in the shallows. They are habitually found moving along the edges of the kelp beds that surround the islands, appearing to have favourite haunts to which they regularly return. Carcass Island and West Point Island are both good locations to encounter this species.

Moths and butterflies are by far the most common insects encountered by the visitor to the Falkland Islands. Many species of moth, some of which have become flightless, are rather small and therefore difficult to find, but some of the larger species are strong fliers, fluttering around lights at night or dwelling in the vegetation. Careful examination of each specimen is needed to confirm its identity. Butterflies are scarcer with only four species recorded on the islands. 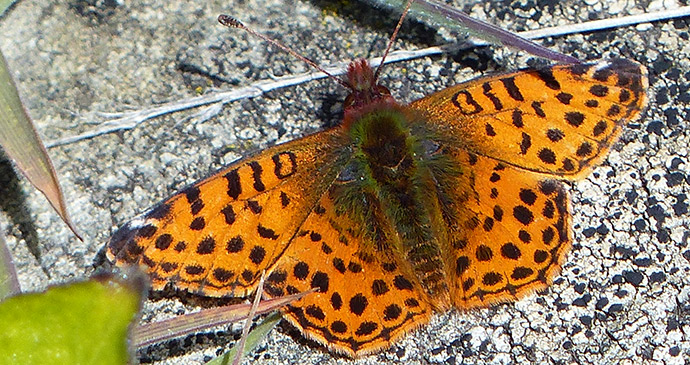 The only species thought to breed on the islands is the queen of Falklands fritillary, which is a medium-sized, dull-orange butterfly with many small black marks forming a pattern towards the outer edge of each wing. This fast-flying butterfly is very difficult to approach or photograph, thus making it difficult to identify. In good years, when it is warm and dry, it is widely reported but in wet, cold years very few are recorded.

A wide range of brightly coloured flowers can be found on the Falkland Islands, many of which are small or are only in bloom for a short time each summer. Some of the most attractive flowers belong to the orchid family, of which four are found on the islands. The easiest to find, although this is by no means guaranteed, is the dog orchid. Two of the brightest coloured of the endemic flowers are the two species of ragwort. Smooth ragwort and woolly ragwort both have many bright yellow flowers sprouting from green stems and are found in heathlands intermixed with diddle-dee and grasslands around the coasts and inland up to 1,000ft (305m). 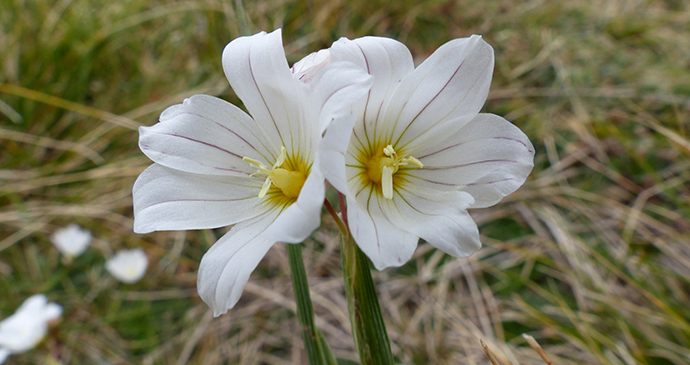 Pale maiden is the national flower of the islands © Will Wagstaff

Pale maiden, although now not thought to be an endemic species, is one of the most flamboyant flowers of the Falkland spring and is the national flower of the islands. Another plant that grows on coastal slopes with rather poor soil is the lady’s slipper. It is often found in small colonies but is not thought to be common on the islands. Of the plants that creep along the ground, one that stands out is the berry-lobelia, which catches the eye on account of the arrangement of its five petals. They are neatly arranged so as to leave a gap, as if something has eaten one side of each blossom. The daisy family is well represented, although one of the first that the visitor finds is usually the introduced European daisy. Three other species are native, one of which – the hairy daisy – is endemic to the Falkland Islands.