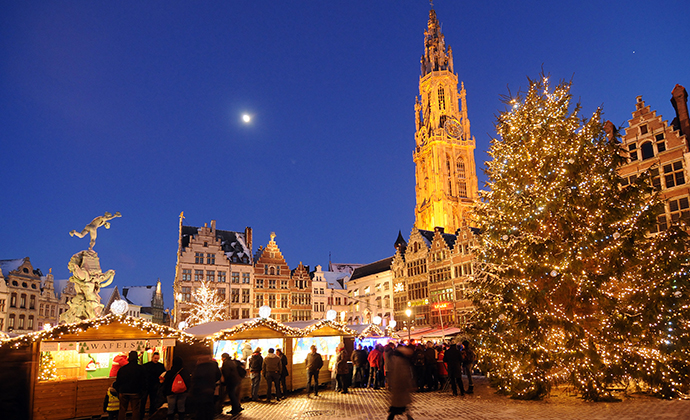 Antwerp’s festive market is one of the country’s best © Antwerpen Toerisme & Congres, VisitFlanders

Flanders loves a good Christmas market and from the end of November until early January, stalls pop up in the main squares of nearly every town. There’s an inevitable amount of tat on offer, of course, but nothing beats mulled wine, warm waffles and the twinkle of fairly lights. Here is a list of the main players.

Stretching from Groenplaats – host to an ice rink – to the river Scheldt, where you’ll find a Ferris wheel and ice-tubing track (the latter has also been known to pop up by the zoo), the Winter in Antwerp season (early December to early January) has plenty of artisanal stalls and music performances.

Given its fame, Bruges’s market can be underwhelming, but the tourist office is stepping up efforts to introduce more crafts, and the city itself is unbeatably atmospheric come Christmas. Pop into the ice sculpture festival by the railway station before browsing the stalls on Markt and Simon-Stevinplein. Usually 23 November to 1 January.

Known as Plaisirs d’Hiver, this is a market befitting the capital’s status, with over 240 chalets snaking from the Grand-Place to place Sainte-Catherine. There are bold light and sound shows on the Grand-Place and food trucks clustered on the now pedestrianised rue Anspach. Runs late November to early January.

Like the city itself, Ghent’s market remains underrated, but more people are cottoning on to its assets – namely smaller crowds than Brussels, an authentic market vibe with wooden huts radiating out from Sint-Baafsplein and, best of all, its superior, almost endless range of street-food stands. Mid-December to early January.

One of Belgium’s cosiest markets: the stalls only remain for two weeks in mid-December, but are brilliant quality. During the Wintertijd (Winter season) events, they also lay on winter walks (pub tours, silence walks), concerts at Sint-Pieterskerk and a raft of food trucks in De Bruul park before New Year. Their nativity scene usually has real sheep, which is lovely. Early December to early January.

Inspired to plan a festive break to Flanders? Check out our comprehensive guide: