With thanks to Sam Banda Jnr and Muti Michael Phoya.

Original voices have always surfaced in Malawi, such as that of Stonard Lungu, who played raw songs of urban struggle and political protest on an untuned box guitar. Listen out and you may catch the next musical star rising.

Traditional Malawian music was played on a wealth of beautiful instruments: anyone with an interest should head to the unlikely surrounds of Chileka Airport in Blantyre, where Singano Village hosts the Jacaranda Museum of Ethnographic Objects. It was founded by ethnomusicologist Dr Moya Malamusi and features bangwe zithers, the alimba (a wooden rod and gourd), the nkangala mouth bow, and much more.

While foreign and urban music can seem to dominate, in this deeply rural nation there are other sounds to be heard. The brilliantly harmonious Malawi Mouse Boys (they once sold mice on sticks as roadside snacks) play homemade instruments and use Coke cans and bike spokes for percussion.

The Zomba Prison Project won the inhabitants of the overcrowded and impoverished jail a Grammy nomination: the women’s songs, unaccompanied except for buckets as drums, are particularly touching. Look out for performances by the Lusubilo Band from the northern city of Karonga: unusually for Malawi they actually use brass instruments, and incorporate traditional dance into their vivacious performances. 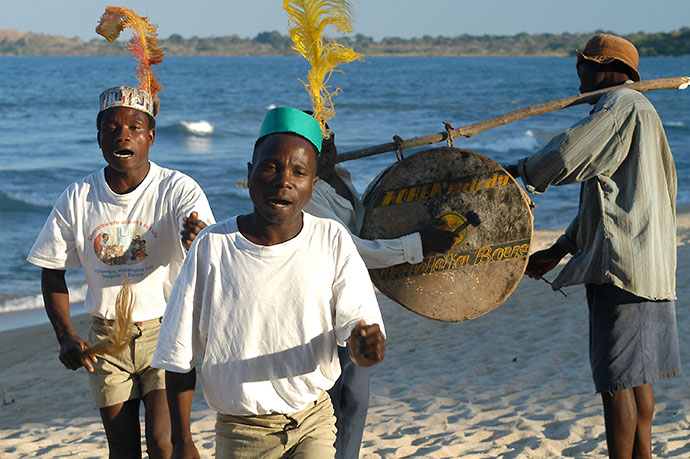 While foreign and urban music appear to dominate the music scene, Malawi boasts plenty of other sounds to be heard © Dana Allen, Central African Wilderness Safaris

Modern Malawian music is hard to define – this has long been a country of migrants, and returnees from mines in South Africa and (what was then) Rhodesia brought African jazz and the skiffle sound of kwela home to Malawi, alongside new instruments such as the guitar. Add to this the influence of missionary hymns, a 1960s Congolese music craze, Banda’s enforced praise songs, a long-time reggae obsession, a more recent US infusion of rap, hip hop and R&B and the soaring popularity of homegrown gospel, and you get a picture of a profoundly musical nation suffering something of an identity crisis.

The Lake of Stars Festival is usually held annually in September and has put the country on the international hipster map. While some of the live music at the festival can sound derivative, if you dig a little you’ll hear artists who are subtly combining a Malawian sensibility with other genres. One of the most talented and magnetic is Afrosoul singer and star guitarist Faith Mussa, who sprang up from a musical family in a Blantyre township. Mussa plays guitar, drums and loops in what he terms an electronic one-man band, as well as performing with a group.

Throughout the country, radio stations do their part to showcase local talent. So turn on the radio, buy a tape or CD (MP3s are everywhere as well), hop on a bus to have your eyes and ears blasted by the latest videos, and go out to the clubs and bars to see what’s happening.

Learn more about Malawi with 10% off our guide to the country: