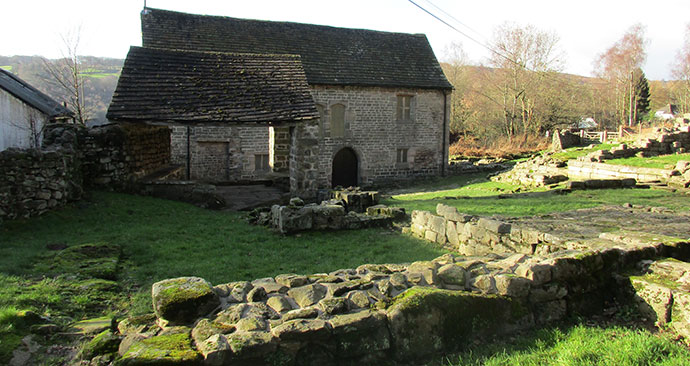 Our walk begins at Grindleford Railway Station; handy for those using public transport. The old station waiting room is now the Grindleford Station Café, a great place to ‘tank up’ with a full English breakfast or a bacon butty. The surroundings may be rough and ready in this ‘greasy spoon’ café, and the rules posted up could come straight from Fawlty Towers, but don’t let that put you off: the food is cooked well and of decent quality, the portions enormous and the prices very reasonable.

The first part of the walk follows a partially unmade road across the hillside from Grindleford Station to Hathersage with views of the Derwent Valley, Miller’s Edge and the Dark Peak beyond. Just a short distance from the railway station, you’ll find the ruins of Padley Hall and the intact Padley Chapel. If you want to have a look inside, make sure you arrive between 14.00 and 16.00 on a Sunday or Wednesday between April and September. It’s here that the Padley Martyrs – two Catholic priests – were found hidden, were arrested and taken to Derby, where they were hung, drawn and quartered.

There are yet more opportunities for tanking up with coffee and cake (or a pint) in Hathersage. On the way out of town, you can stop off at the David Mellor Design Museum, factory, shop and café, which is an interesting diversion. Off the main road, the sylvan and tranquil route follows the course of the River Derwent through floodplains and woodland before re-joining the unmade lane that leads to Grindleford Station.

This mostly level, circular walk is around 5 miles – but there’s always the option of grabbing the train from Hathersage back to Grindleford, which is equally agreeable.

1) Head across the railway bridge next to Totley Tunnel and follow the rough unmade lane as it twists around the mill, then past a row of semis as far as Padley Chapel. Take time to have a look at the ruins of the hall and the chapel.

2) Continue along the lane to the end, where it meets the main road (A6187). Turn left and head down the road (pavement all the way) in to Hathersage.

3) Turn left at the junction opposite the George Hotel at the bottom of the hill (signposted for Grindleford and the cutlery factory). On the edge of town, a left turn signed Station Approach leads to Hathersage Railway Station (with the option of returning to Grindleford Station by train).

5) Cross the road just before the bridge and take a left turn down a lane, following the wooden fingerpost.

6) Follow the road right as it continues alongside the river. Just short of the house at the end of the lane, take the stile into the flood meadow and continue through fields and woods that follow the course of the River Derwent