Campanilismo is an old, gently mocking word that you’ll still hear often in Italian political news. It means local particularism, or local patriotism – the heartfelt conviction that your village’s bell tower is grander than anybody else’s bell tower. 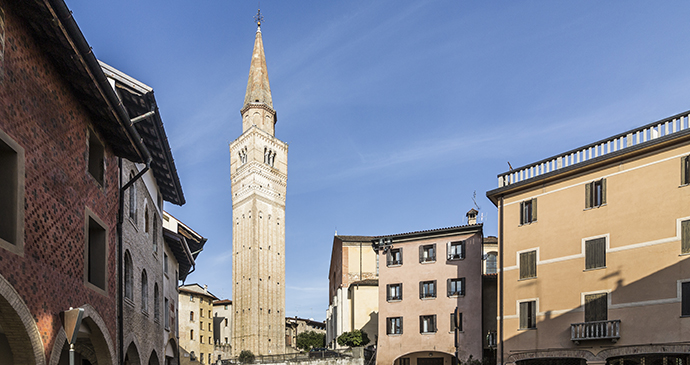 Construction began on the bell tower in Pordenone in the 13th century © Fabrice Gallina, PromoTurismoFVG

Campanili have been the symbols of spirit and achievements since the Middle Ages, and each town or village strove to put up the loftiest and stateliest it could manage. The urge to verticality in medieval north Italy created some of the tallest buildings in the world before the 19th century, and the old lands of the patriarchate added more than their share. Here even small villages often have towers of over 50m.

The 73m tower at the Basilica of Aquileia, begun by Patriarch Poppone in the 1030s, was the model: honest and foursquare, with a bifora window near the top of each side where the bells hung, and an octagonal storey above that with a conical roof.

There are spectacular campanili at Pordenone and San Vito al Tagliamento, and there are good examples in Forni di Sopra and Enemonzo in Carnia. But the effect is at its best east of the Tagliamento, where campanili even in tiny, unknown villages such as Moruzzo, Rivignano and Santa Maria la Longa poke up like majestic exclamation points all across the plain. Often you can see five or more of them at a time on the horizon.

One way to beat your neighbours was to tack on a bronze or copper statue, for a cherry on top. Udine wins the prize with a revolving bronze angel that tells the weather. Grado has the Archangel Michael, Favagna, a St Thomas. The pride of the little village of Premariacco is the angel Gabriel on its campanile. Hit by lightning in 2017, they had him and his horn fixed up and back in place within two weeks. Then there’s Buttrio, with a clock that was installed upside down, the only one in Italy (some locals will try to tell you the clock is fine, and it’s actually the campanile that is upside down). Venzone once had a golden ball that turned into a pumpkin.

They’re still at it. The biggest campanile of all, the biggest in Italy no less, at 113m, is in the village of Mortegliano south of Udine, completed only in 1959