In an extract from Me, My Bike and a Street Dog Called Lucy, Ishbel Holmes talks about meeting Lucy for the first time. 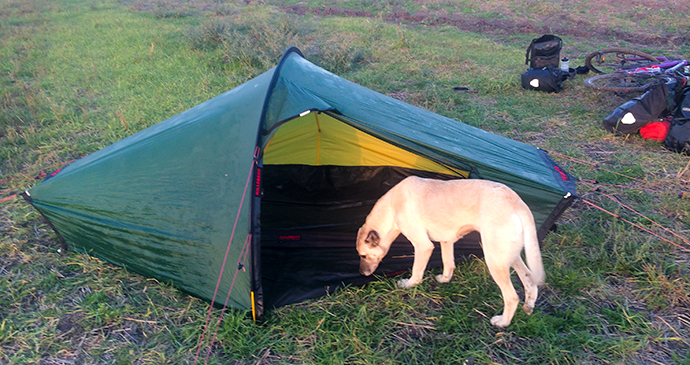 On my very first night cycling the world, with 30 kilos of luggage hanging from my bicycle, I realised I had forgotten to pack a lighter. I sat outside my tent in darkness, striking two pebbles together without success. Crawling into my sleeping bag that night, I was hungry and disappointed, knowing a real adventurer would have found a way to light her stove and cook dinner.

Five months later and pedalling across my tenth country, Turkey, I still yearned for the day I’d resemble an adventurer, but to date I’d had too many hysterical moments involving spiders, slugs, and imaginary monsters to count myself as the real deal. Each night I wild camped, and every sunset brought along with it my three biggest fears: one, that human beings would find me and murder me; two, that animals would find me and eat me; and three, that a combine harvester wouldn’t see my tent and I’d be combine-harvested up.

I’d wanted to build a campfire many times along the way through Europe, but visions of burning down whole forests had stopped me. I had entered Turkey through Greece just over a week ago and today I was about 200 kilometres west of Istanbul, cycling a quiet coastal road along the Sea of Marmara. The empty winter beaches scattered with driftwood were inspiring me once more, and I decided that tonight, yes, I would build the first campfire of my trip. I smiled – one step closer to being a real adventurer!

It was late afternoon as I turned down a road to my right, leading me through a cluster of wooden houses and towards a beach. I stopped at a small village shop, which was dusty and packed full of everything you could possibly need, from DIY supplies to cans of fruit; everything but customers.

Money was tight, and I deliberated greatly before buying an onion. I would cook that with tonight’s pasta, adding my remaining garlic to give it more taste. Only last week I had been down to my last twenty quid when a Scottish company, Intelligent Data Group, saw my Facebook post declaring my plan to dumpster dive and donated some cash to keep me going. The less I spent of it, the more days ahead I could eat. This struggle was nothing new. I had always travelled on a shoestring budget. I figured not having money was a small inconvenience for the priceless experiences that travelling by bicycle brought. 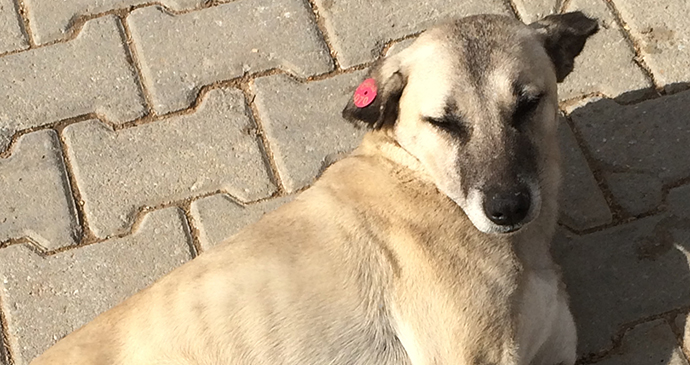 I found the beach empty except for a few dogs in the distance. The winter-grey sea and boarded-up tourist beach huts gave it an abandoned, derelict look. Although it was perfect for building a campfire, I had an uneasy feeling I could not shake. As a woman cycling the world on my own, I obeyed my instincts. Disappointed, I turned back to cycle the way I’d come, with intentions of trying the next beach along.

I took a final glance behind, hoping it would provide the thumbs-up I needed to stay and build my campfire there. Instead, I was greeted by the surprise of a light-coloured dog padding along to the rear of my bicycle. I grinned. During my past days of racing bicycles, we were taught to ride in what’s called the ‘blind spot’ of the competitor in front; this tactic allowed us to remain hidden while conserving energy. This dog was absolutely nailing my blind spot!

I knew it was best not to acknowledge or feed random dogs along my route. They could try to tag along, which was an impossible situation for both parties. Other cycle tourers had warned me, ‘Remember, you’re cycling the world; stray dogs are not your problem!’ I ignored the dog and cycled back through the village and onto the main road, vacant of traffic. I checked behind. The dog was still there.

To read more about Ishbel and Lucy’s story, click here: