In an extract from Me, My Bike and a Street Dog Called Lucy, Ishbel Holmes describes her arrival at the Syrian border .

It had taken us 1,120 hard kilometres to arrive at this moment, and I took the time to snap the standard selfie against the Hatay welcome sign. I felt ecstatic and celebratory. But that feeling didn’t last, for it didn’t take long to see the first signs of war.

I knew there was a war close by, but cycling past a Syrian Refugee Camp took me by surprise. It wasn’t like those you saw on television. They, I later found out, had been full for some time, and so refugees were making their own camps, which farmers allowed on their land in exchange for labour. The refugees had tents for shelter but neither running water nor toilet facilities. 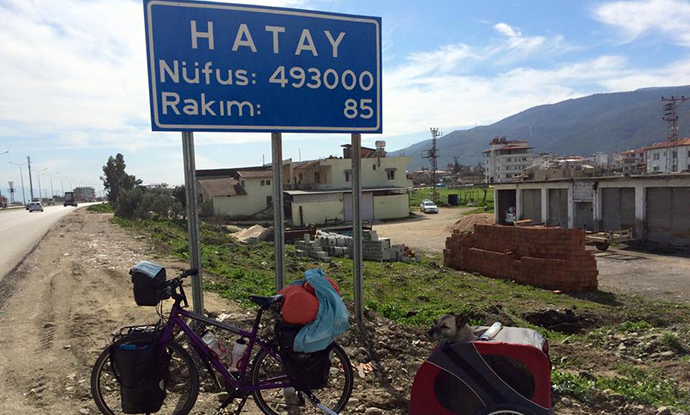 A group of children ran through the camp to reach me on the road, and I stopped, allowing them to catch up with me. Their small faces were streaked with mud, their clothes were tattered rags, and some wore no shoes. I said hello with a lump in my throat, shocked at seeing children so dirty. I had never seen such insufferable conditions. This was the first time children had completely ignored Lucy. Instead, they formed a queue and held out their hands, smiling at me. This broke my heart. I didn’t have any money on me, not even change. I put my feet down on the pedals and cycled away with the children chasing after me, hands still held out in front of them. I decided I would stop at the next bank I passed to withdraw money. I never wanted to be in that position again.

I passed countless wedding dress shops. Men from all over Turkey came to Hatay to buy their second and third wives. Agents introduced prospective buyers to women desperate for safety. Such a booming business from the war resulted in towns being crammed full of these shops to service the human trafficking.

I didn’t feel safe wild camping here; it would be a hotel tonight. After considerable searching, I found one online that would accept dogs. Following Google Maps, I started cycling toward the centre of Hatay. The road was a mess of pot-holes, and I grew wary as the area got worse and worse. I cycled along the Orontes River, nicknamed the ‘Rebel’ because unlike the rest of the rivers in the area it flows south to north from Lebanon, through Syria, reaching the Mediterranean Sea in Turkey. The river reminded me a little of myself. Always going in the opposite direction of everyone else.

I finally arrived at the hotel, in a dirty and derelict neighbourhood. If Lucy hadn’t been my bike’s security guard, there’s no way I’d have left my gear outside to go into the hotel. I walked in and was overwhelmed by the damp, mouldy smell. The staff reluctantly confirmed that they would allow Lucy inside, and I checked us in. They showed me to the room, and my skin crawled at how dirty it was. For sure I’d be sharing this bed with bed bugs. Still, it was a better option than being outside in the city at night.

I headed back downstairs to get my bike and Lucy when a manager approached me and said I wasn’t allowed to bring Lucy inside the hotel because the other guests would complain. I nearly choked at the absurd notion that guests staying in a hotel where you could catch disease from breathing would complain about Lucy, who made no sound and was no bother. I argued my case, but to deaf ears, and was told firmly to leave.

Now I was back on the street, at night, in a town where I knew not a soul, less than 30 kilometres from the Syrian border.

To read more of Ishbel and Lucy’s story, click here: