Looking at the current lifestyle of the Bushmen who remain in the more remote areas of the Kalahari, it’s difficult not to lapse into a romantic view of ignoring present realities. There are too many cultural aspects to cover here, so instead I’ve just picked out a few that you may encounter. 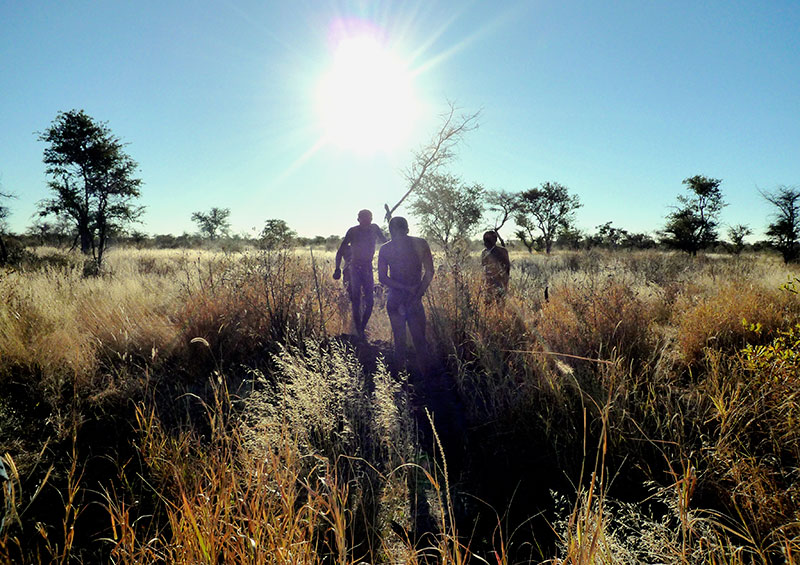 Bushmen are often referred to as nomads – but they are not © David Barrie, Flickr

Nomads of the Kalahari

Perhaps the first idea to dispel is that the Bushmen are nomads. They’re not. Bushmen family groups have clearly defined territories, called a n!ore (in the Ju/’hoansi language), within which they forage. This is usually centred on a place where there is water, and contains food resources sufficient for the basic subsistence of the group.

Groups recognise rights to the n!ore, which is passed on from father to first-born son. Any visiting people would ask permission to remain in these. Researchers have mapped these areas, even in places like the Central Kalahari.

The survival of the Bushmen in the harsh environment of the Kalahari is evidence of the supreme adaptability of humans. It  reflects their detailed knowledge of their environment, which provides them not only with food, but with materials for shelter and medicine in the form of plants.

Another very important factor in their survival is the social system by which the Bushmen live. Social interaction is governed by unwritten rules that bind the people in friendship and harmony, which must be maintained. One such mechanism is the obligation to distribute the meat from a large kill. Another is the obligation to lend such few things as are individually possessed, thereby incurring a debt of obligation from the borrower. The San also practise exogamy, which means they have an obligation to marry outside the group. This creates social bonds between groups. Such ties bind the society inextricably together, as does the system of gift exchange between separate groups.

Owing to environmental constraints a group will consist of between 80 and 120 people, living and moving together. In times of shortage the groups will be much smaller, sometimes consisting of only immediate family – parents, grandparents and children. They must be able to carry everything they possess. Their huts are light constructions of grass, and they have few possessions. Because no-one owns property, no-one is richer or has more status than another. A group of Bushmen has a nominal leader, who might be a senior member of the group, an expert hunter, or the person who owns the water rights. The whole group takes decisions affecting them, often after vociferous discussions. 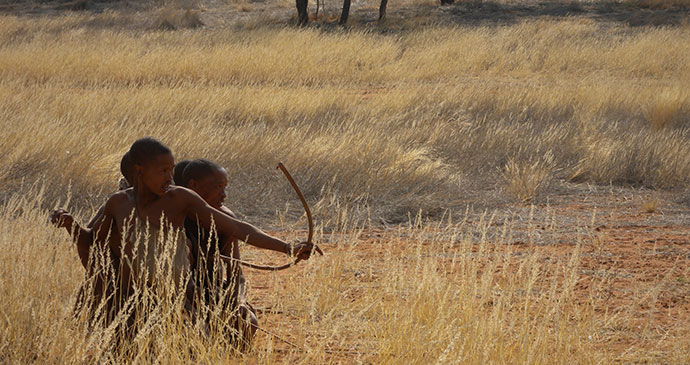 The Bushmen in the Kalahari are practised hunters © Frank Vassen, Flickr

Any hunter-gatherer lifestyle entails a dependence on, and extensive knowledge of, the environment and the resident fauna and flora found there. In the Kalahari, water is the greatest need and the Bushmen know which roots and tubers provide liquid to quench thirst. They create sip wells in the desert, digging a hole, filled with soft grass, then using a reed to suck water into the hole, and send it bubbling up the reed to fill an ostrich egg. Water-filled ostrich eggs are also buried at specific locations within the group’s ‘area’. When necessary the Bushmen will strain the liquid from the rumen of a herbivore and drink that.

Researchers have observed that any hunting is done by the men. When living a basic hunting and gathering lifestyle, with little external input, hunting provides only about 20% of their food. The remaining 80% is provided largely by the women, helped by the children, who forage and gather wild food from the bush. By age 12 a child might know about 200 plant species, and an adult more than 300.

The Bushmen in the Kalahari are practised hunters, using many different techniques to capture the game. Their main weapons are a very light bow, and an arrow made of reed, in three sections. The arrowhead is usually poisoned, using one of a number of poisons obtained from specific plants, snakes and beetles. (Though most Bushmen know how to hunt with bows and arrows, the actual practice is increasingly uncommon when it’s not done to earn money from observing visitors.) All the hunters may be involved in the capture of large game, which carries with it certain obligations. The whole group shares in the kill and each member is entitled to a certain portion of the meat.

There are different methods for hunting small game, which only the hunter’s family would usually share. One method for catching spring hares involves long (sometimes 4m), flexible poles made of thin sticks, with a duiker’s horn (or more usually now a metal hook) fastened to the end. These are rammed into the hare’s hole, impaling the animal, which is then pulled or dug out.

Entertainment for the Bushmen, when things are good, usually involves dancing. During some dances, which may often have overtones of ritual or religion, the dancers may fall into a trance and collapse. These trances are induced by a deliberate breathing technique, with a clear physiological explanation.

Dances normally take place in the evening, around a fire. Then the women, children and old people will sit around and clap, while some of the younger men will dance around the circle in an energetic, rhythmic dance. Often this is all that happens, and after a while the excitement dies down and everyone goes to sleep.

However, on fairly rare occasions, the dancers will go into a trance. After several hours of constant exertion, they will shorten their breathing. This creates an oxygen deficiency, which leads to the heart pumping more strongly to compensate. Blood pressure to the brain increases; the dancer loses consciousness and collapses.

Learn more about Namibia’s traditional people in our guide: