In this extract from The Voyage to Wild Cat Island, Amy-Jane Beer describes an ambitious canoe trip to the island made famous by Arthur Ransome’s Swallows and Amazons, that didn’t quite go to plan. 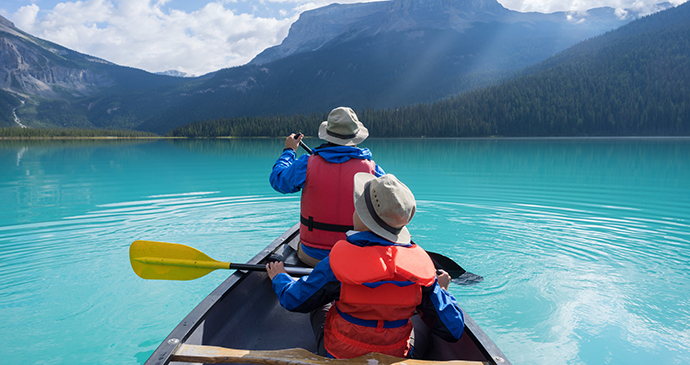 In Lochy’s view, the smaller and less inhabited the island the better, and the best of all islands is the first he remembers visiting. It’s also one of the tiniest, though it could hardly command a bigger place in his imagination. Most maps of the Lake District call it Peel Island – but fans of Arthur Ransome’s blissful Swallows and Amazons adventure series will know it as Wild Cat Island. They will also know that properly, you should have no map, but make one for yourself. You should pack your rations and a few other useful items – telescope, pocket knife, Jolly Roger flag – and set forth onto uncharted waters. Your craft may look like a canoe, a sit-on-top-kayak, an inflatable dinghy or (if you’re really going for authenticity) a sailing boat rented in Coniston, but you know that really, it is a pirate brig or a raft you have cobbled together from bits of shipwreck.

On reaching the small island huddled close to the southeastern shore of the lake, you find your way in among the rocks to the hidden harbour. You disembark, watchful for natives, and you  explore every track, every cluster of trees, every cliff and lookout, every rocky corner, and then you plant your flag and declare the island yours forever.

This, in essence, was the plan on a cloudless May morning when we shoved off from a stony beach on the western shore. We’d brought our own canoe, which accommodates three, but had spiced up the challenge by wrestling a six-month-old Border collie into a life jacket and coaxing her aboard. It was beguilingly warm, the lake and the fells blazed in saturated Instagram hues.

Ten minutes later we launched again after stopping for the wee Lochy remembered he needed moments after we set off the first time. A further ten minutes after that we realised he was missing the sun hat he’d set out in. On questioning, he thought he might have left it by the weeing tree. In the interests of making progress, we decided to press on and try to retrieve it on our way back: ‘Here, you can wear Daddy’s hat for now’. Roy proffered the cap he usually wears for running. It’s nothing special, but Lochy was pleased with it.

Some time later, just as we attempted to push out from the shore towards the island on the other side, the breeze picked up. Funnelled by the fells, it blew almost straight down the lake, driving the well-laden boat sideways, away from the island and back towards the western shore. Our progress suddenly required constant correction, and the comfortable lapping of water under the bow was replaced by abrupt slapping on the port side.

In the space of two minutes, our lazy stokes became laboured, and in the space of five we realised we’d made a mistake in not crossing sooner. From where we were, we couldn’t continue to alter our approach without turning fully sideways to the wind – and already it was strong enough that doing so would be difficult and unstable.

We decided to carry on into the shelter of the next bay, then attempt to cross the lake at the narrowest point. ‘We’ll have to do it by heading into the wind,’ Roy shouted from the stern. ‘It’ll be harder work, but we’ll be able to keep on course, and if we pick the right place it won’t be long before we gain the shelter of the eastern shore.’

He wasn’t kidding about hard work. There was no flow on the lake but the wind forced us to paddle as though we were crossing a river – angling the boat well upstream of our destination and pushing hard against the current, seeking to compensate for the ground we would lose.

By halfway, my shoulder muscles were starting to flood with lactic acid, and the boy was starting to fret. Partly it was that the wind was chilly, and our paddles were spattering him with water, but he’d also picked up the vibe. It’s nigh on impossible to keep up cheery chatter when you’re paddling as hard as you can. Lochy fidgeted, was told sharply to sit still, and suddenly he didn’t like it any more.

You read things from time to time about canoes with children in, capsizing in the middle of chilly lakes. And we often see boats heading out in which nobody is wearing dry kit or a buoyancy aid – or perhaps only the children are. It gives me the absolute willies. British lakes are cold, most of the year, especially the deep ones. And if you’re not used to it, cold affects your ability to swim, to think, or do anything useful. If the adult is in trouble, the kids are too.

We were kitted up. Personal flotation devices all round, dog included, and buoyancy bags in the boat. None of us would sink, no matter what. But still, I’ve not had to work so hard with Lochy in the boat before and I was stressed. A sudden strong gust of wind elicited a long wail… ‘Daddy’s haaaat!’ It had blown off Lochy’s head and into the water. The boat lurched and lost momentum as Roy made a single unsuccessful attempt to catch it with his paddle. One lost stroke was lesson enough. ‘Forget it, keep going.’