In this extract from The Trip to Bunny Island, Suzanne Kamata and her daughter Lilia arrive on Ōkunoshima, a tiny Japanese islet inhabited by hundreds of adorable wild rabbits. 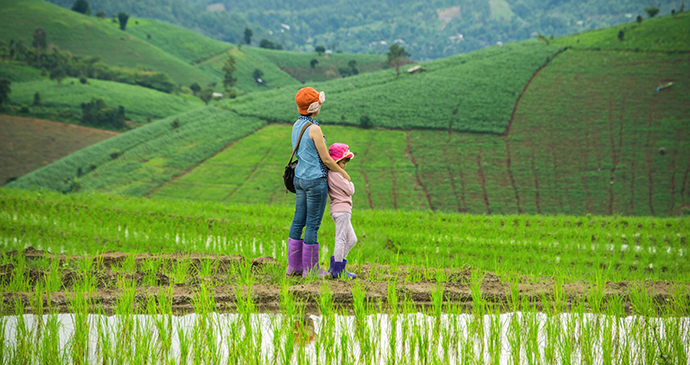 The crossing took twenty minutes. I half-expected hordes of rabbits to greet us upon disembarking, but it was hot. The first bunnies I spotted were lolling beneath bushes, their energy sapped by high temperatures and humidity. I pointed them out to Lilia. ‘There, in this burrow. Under that picnic table.’

The tour guide had arranged for a minibus to transport my daughter and me to the Usagi Lunch Café, where our group would eat. It occurred to me that this was the first Japanese island I had visited that wasn’t home to stray cats. ‘Are there any predators on this island?’ I asked our driver. He thought for a moment. ‘Maybe crows.’

We arrived at the restaurant. Here diners with a sense of humour could order pancakes branded with bunnies, white rice moulded into rabbit shapes surrounded by curry, and long-eared rice-filled omelettes. After lunch, we set out to explore. The bunnies were not hard to find. On a grassy lawn, we settled in a shady spot under some trees. Some bunnies were similarly seeking solace from the sun, so we tempted them closer by offering titbits. I was worried that they might bite our fingers, but they were docile and friendly, nibbling only on the food offered. ‘Kawaii!’ Lilia said. ‘Cute!’

Although the rabbits now live in the wild, they are supposedly descendants of domestic rabbits. The most anodyne story goes that, in 1971, children released eight of the creatures on to the island. As is rabbits’ wont, they swiftly proliferated: now some seven hundred call it home.

There is an alternative, more sinister theory as to how the rabbits came to inhabit the island. Unbeknownst to many Japanese, from 1929–45 chemical weapons were manufactured for the Japanese Army on Ōkunoshima. This project was so secret that, during this period, the island was omitted from most maps of Japan. The poisonous substances produced – including mustard gas, tear gas and phosgene – were used more than two thousand times against the Chinese during World War II, killing eighty thousand people. Rabbits were allegedly introduced so that the effectiveness of the gases could be tested. A different take on the leporine history is that the current population is descended from test rabbits released after the chemical-weapon facility was destroyed in 1945 by US Armed Forces.

Whatever the truth about the rabbits’ arrival, Japan is no longer secretive about Ōkunoshima’s poisonous past.