We climbed up from Panjtarni on a narrow, cliff-cut path, before turning north into the bleak Amarnath Valley. Now we started to pass other pilgrims who had walked in from the road to the west, a shorter route to the cave but not the traditional yatra route. We passed three students in plimsolls. They carried their lunch of puris in plastic bags dangling from their fingers and each one had a bottle of Mirinda orange in his trouser pocket. Next we passed a group of soldiers in a mixture of uniform and casual clothes, who carried their rifles like spades over their shoulders. They told me they would be stationed here at the cave-side army post to prevent the kind of attacks on Hindu pilgrims that had occurred a few years before at one of the tented camps. We quickly overtook a lone bare-footed pilgrim dressed in a white gown and balaclava. He walked slowly and awkwardly, trying to take most of the step with his heel. His eyes were hidden behind orange sunglasses and he whispered to himself as I passed. 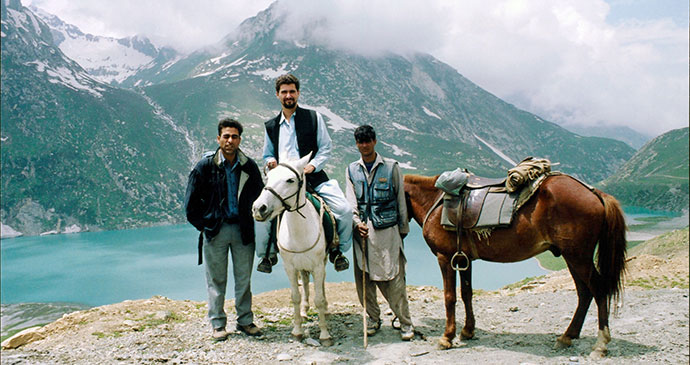 We were all heading in the same direction, towards the Amarnath Cave, a high-altitude glacial shrine where every year thousands of pilgrims come to witness the iced stalagmite Shiva lingam that forms from the cave roof. I could see the wide, dark entrance of the cave above. The last steep climb was on concrete steps lined with railings. Two flights ran up the slope to cope with the huge crowds that circulated into and out of the cave. Later in the season there would be throngs of people, but now, before the yatra season, there were only a few others here.

The odour of the cave was extremely rich and complex in comparison the spare mountain air. I smelled marigolds and rose petals, sweet incense, bidi smoke and the flavour of ginger and coriander from swinging tiffin cans. Iron arches stretched over the path hung with bells and the pilgrims set these chiming with the prayer to Shiva, ‘Bham bham bhole’. The yatri already in the cave shouted ‘Bham bhole’ back down, loud and triumphant like challenges on a cricket pitch.

A line of shoes lay at the cave entrance; from here, on ice and gravel, all of us had to go barefoot. At the back of the cave was the white frozen lingam that I had come to see. It filled the apex of the cave, formed from a tiny trickle of water that emerged from an underground stream. It was bulbous and opaque white, so much so that it almost glowed against the black rock. It had been strewn with pink petals that had frozen into the ice so that it was speckled with colour. Now I saw there were other, smaller ice lingams to the left nestling in their own crevices; I was told these were for other gods. 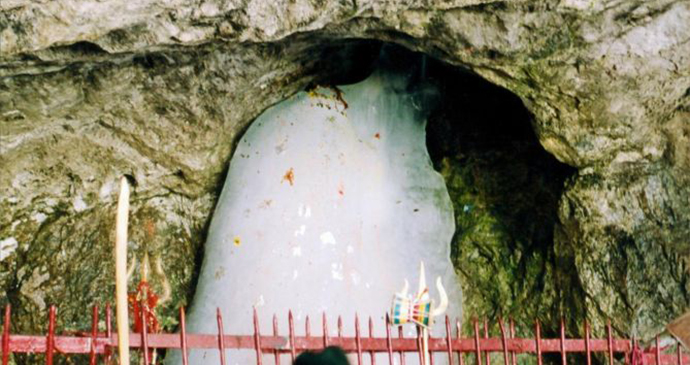 Amarnath is home to the most important Shiva lingam in Kashmir, which stands at 8ft high © Iain Campbell

The pilgrims pressed against the railings and handed bags of sweets to the attendants who passed them before the lingams and then handed them back. The railings were covered with photographs: solemn wedding pictures, passport photos, smiling children with the red tikka mark. They were attached with ribbons or pierced on to the barbed wire that protected the shrine. Many of the photos had already fallen to the ice to half-freeze into the base of the lingam where they slowly fragmented before running down the mountain with the meltwater. I turned away and looked out of the mouth of the cave to the twisting rock faces opposite, bare like exposed muscle, snow lying along the line of the cliffs in narrow strips like the sinews.

A few steps down from the lingam was an altar full of statues and black- and red-smeared stone lingams. I remembered the other times I had seen these Hindu Shivaite devotional objects on my journey up the Indus River. I remembered sitting beside the Sadhubela altar, a rare, still-functioning Hindu island temple in Pakistan, and feeling my head burn in the heat and the sweat trickle down my back. It was the same lingam here, the same smells of incense and flowers, but I was over 10,000ft higher now and my bare feet were prickling with the cold of the ice. 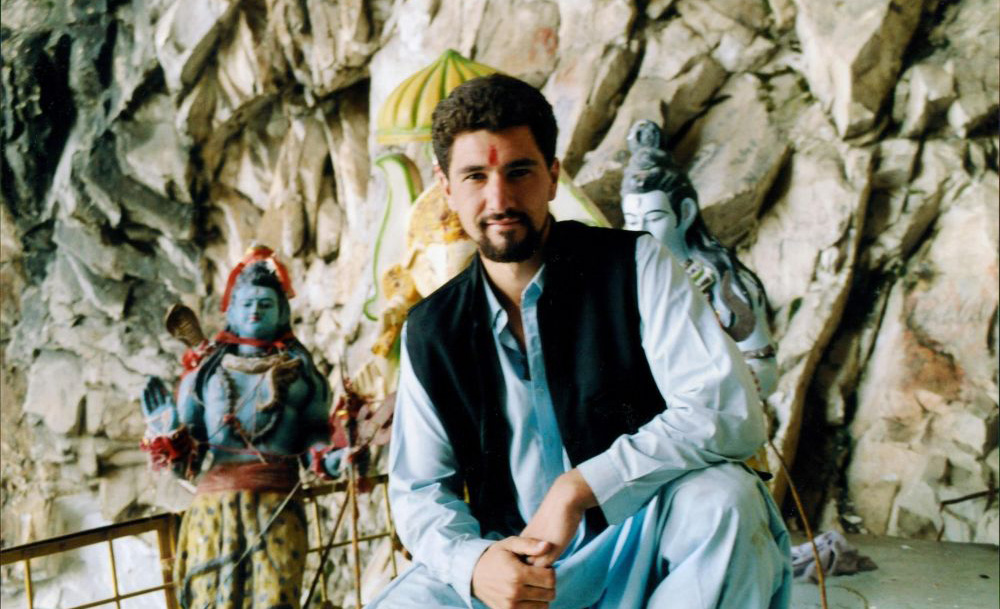