Further up the banks he showed me the rusting hulk of another of the old ferries that used to transport people across the Indus River before it became to silted and shallow. This was a paddle steamer, but the paddles had rotted, leaving only their circular metal skeleton and making the boat look like an amphibious combine harvester. I swung the boiler doors open, revealing the exhaust tubes that ran into twin funnels now partially blocked with birds’ nests. I felt the childish excitement that I used to experience during family holidays on farms, when we’d discover old tractors left to decay in the fields and would spend hours playing on them.

Although this nameless paddle steamer was a newer vessel, its machinery still bore those imperial brands – ‘McKenzie & Co Engineers. Karachi’, ‘Chadburns Ship Telegraph Co Ltd. Liverpool’ – with its big brass handle and the telegraph orders running around the circular dial: Full Ahead, Half, Slow, Stop. Full Astern, Half, Slow, Stop. 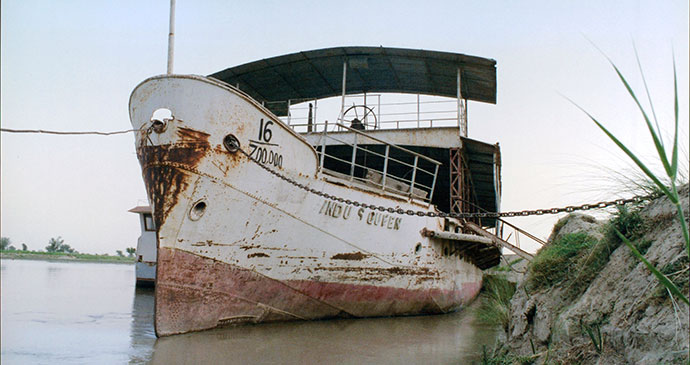 The hulking ruin of the Indus Queen © Iain Campbell

The chain pulley still worked. Although it had not been oiled for years it still turned when I pulled it and began to reel in slowly. Up the chain came, link by rusty link, winding itself around the spindle of the wheel. Finally the last link came in, clinking across the deck and hanging loosely. It was not attached to anything anymore.

Another clinking came from the riverbank – a goatherd was trailing a flock of white goats, each with the upper part of its head dyed orange with henna. They followed him obediently.

There was a haze of cloud in the sky now and a breath of wind over the water. It was pleasantly cool. Birds circled over the reedy islands, flashing white patches on the underside of their wings like the glint of mirrors in the sun. A tractor purred in the dust thrown up by its wheels. The goats followed their goatherd into a field, and an old man cycled along the raised embankment with three milk cans lashed to his carrier, going just fast enough not to topple over. 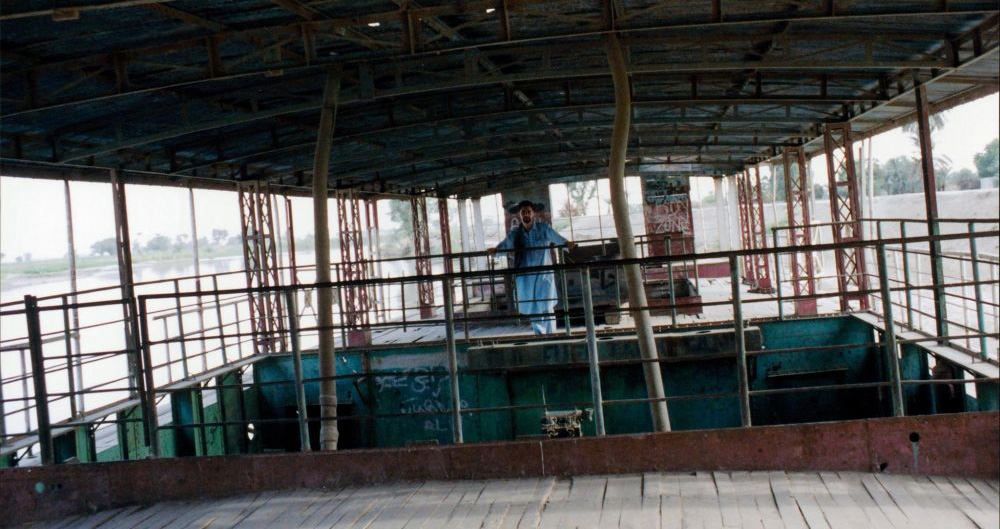 A raven perched next to me on the ship’s bridge, cawing, and I hissed at it to go away and leave me alone in the lovely peace of the riverbank. I was overcome with a tremendous sense of warmth and contentment, a feeling that in a world that always seems imperfect, my particular place in that moment could not have been bettered. As if all the various internal and external stimuli that make us feel were somehow pushing in the same direction. I was alone on a rusty ship with the heat of the day subsiding. Later I would go back to the hotel at Mithankot, there would be tea and chapatti, and tomorrow I would move on upriver. There was nothing remarkable in any of this but that didn’t matter. Sometimes the way our experiences affect us converge in a way that makes us feel simple contentment.