As winter made way for spring, the last potent symbol of Lille’s signature taste for seafood passed from living legend to beloved memory.

Mention food to anyone who has dined in Lille and the heart skips to the beat of oysters and mussels. Mussels are a symbol of the city at its honest best, the abiding image of the annual Braderie street sale being the photo of a mountain of shells piled storeys-high on the pavement outside Aux Moules brasserie, with 500 tonnes of them picked up by the roadsweepers at the end of the weekend.

Just as oysters had always meant A l’Huitrière, an Art Deco fish restaurant and seafood bar amid the chic boutiques of Vieux Lille. Alas, in 2015, after 80 years in the Guide Michelin, the Lille institution closed its doors for the last time; now Aux Moules, too, has tossed out its final empty shell, its well-worn banquettes, rickety tables, and traditional menu folders – even the bar with its eight beer pumps is to be auctioned off in April and the dining room on the corner of rue de Bethune and rue des Molfonds replaced by a yet another brace of clothes shops.

Regular readers of my Bradt Guide in all of its incarnations (since its earliest life as a third of the tri-city companion to Eurostar destinations), will recall the affection with which each visit to A l’Huitrière was reported. There was always something special about arriving in the old quarter from the gorgeous bustling squares, hoiking your feet from the cobbles and entering the Art Deco jewel box of a poissonerie on the rue des Chats Bossus. In this realm of the hunchbacked cat, Neptune was king, stunning mosaics shimmered above glistening catch of the day, turbot and bream, baskets of oysters and wondrous confections bottled and en gelée, all bathed in a maritime twilight. Behind the shop, the restaurant was genteel discretion: light wood panels; woollen tapestries; navy and white service on crisp white linens. 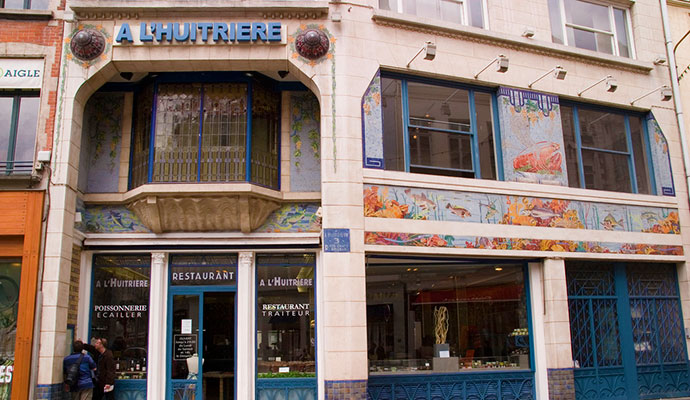 The restaurant opened its doors in 1928, and for much of the past 87 years, four generations of chefs, from Pierre Bailleul to his great grandson Antoine Proye, wore a Michelin star with pride. Then in 2012, as more fashionable new chefs from the TV and fusion generation, with canny budget aware and original menus, seized the red guide laurels, the macaron Michelin was lost forever.

Monsieur Proye had added an oyster bar to complement the traditional dining room and on my last visit, just over a year ago, the place still had its loyal fans right up until the end. At around 18.00, ladies who had spent the afternoon window-shopping would commandeer the two or three little tables outside front door. Wearing pashminas or sunglasses, selon le saison, they would order glasses of chilled chardonnay, designer handbags on the tables, giving way to dinky little plates of oysters for the apéro between life as one of les girls and the evening role of the good wife. But then last year, la famille Proye said its last adieu, andLille lost the pearl in its culinary crown.

To lose one seafood restaurant might be regarded as a misfortune, however to lose two …. 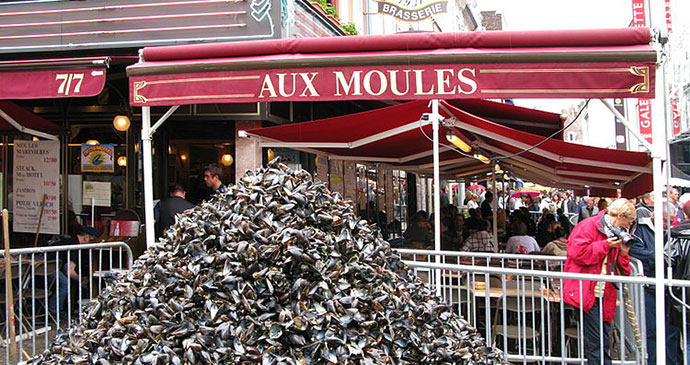 Piles of moules were always stacked outside the front door during Braderie weekend © gerard, Wikimedia Commons

Just as the television news was on hand to witness the end of an era of gastronomy in Vieux Lille, so the cameras rolled on rue de Bethune, to report the demise of Aux Moules, icon of simple honest brasserie cuisine, à la Lilloise. A good honest old-fashioned luncherie, it was here that Jacques Chirac downed a beer for Dutch courage the day that he announced he was running for president, and here that scores of locals would order their regular lunch five days a week.

However, after 40 years, Mme Michèle Courtois, owner since the 1970s, was ready for retirement. The restaurant had served much the same moules-frites menu since 1930, although back then the cost of lunch was four francs, and a last supper in 2016 would have set you back €18. Home to symbols of Lille, from massive mural photographs of the Braderie heaps to that gargantuan mussel shell suspended above the door, a landmark of the street, the restaurant will be missed as much for its desserts (tarte à la rhubarbe at the end of the meal and the biggest éclair au chocolat in town anytime of the day for a mid-shopping sugar rush) as its moules.

So whilst up-and-coming young chefs did not bite at the chance of taking over a classic brasserie, instead wanting to make their names with flash-fried belly of guinea-foul in liquorice and beetroot foam with diced turnips and a lavender, herring and kidney jus (perhaps fashion did play a part in the demise after all), there is consolation in the fact that there will always be honest brasserie cuisine in the heart of Lille, and the Bradt Guide lists a good half dozen alternatives (from page 85 onwards). Closest to the cinemas of rue Bethune, Brasserie André keeps up the good work with classic mussel and brasserie standards for the old-timers and expense account sets alike, and around the corner, Le Paon d’Or is serves hearty working class belly-fillers.

For those whose food fortune is guided by the stars, the thick red book dished out its favours. After the demise of A l’Huitière, the new chef on the block is Nicolas Pourcheresse, who opened his dining room at the Hotel Clarance in Vieux Lille last summer and who was twinkling his Michelin star even as the final old school meals were being served Aux Moules across town.

Later this spring, I’ll return to the Bradt blog and tell you about dining at the Clarance (which was born after we went to press with the latest print edition) and I’ll also let you know about bistros and other tables I have discovered in recent months.

Meanwhile, for your next visit to Lille, armed with your Bradt Guide, here’s where to look up some alternative addresses for your lunch.

Instead of Aux Moules, try:

Instead of A l’Huitrière, try:

l’Ecume des Mers: Page 98 (from the same Proye family that ran A l’Huitrière)