From the Middle Ages to the present day, the various paths of the Camino de Santiago have lured pilgrims from around the world to travel on foot, on horseback and, in later years, by bicycle to Santiago de Compostela in Galicia.

Most pilgrims are either Spanish or French by origin, but occasionally new trends emerge. A middle-aged, German comedian’s sudden decision to suspend his career and walk the route prompted a wave of German pilgrims in 2010; a book about the pilgrimage written by a Korean girl saw a huge recent influx of Asian pilgrims; and the recent increase in Anglophonic walkers can be partially attributed to the film The Way, first screened in 2010. 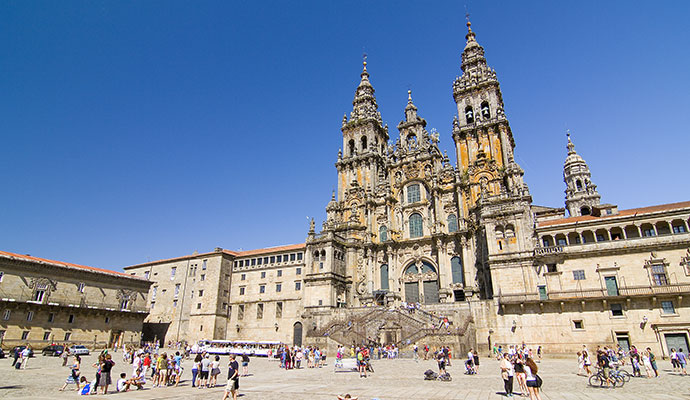 A pilgrimage should start from your own doorstep, so perhaps talking about different, established ‘starting-points’ such as Saint-Jean-Pied-de-Port or Roncesvalles is meaningless. But the various caminos inject a huge, welcome shot of economic activity into the midst of the towns that line the ‘official’ way-marked routes, guaranteeing thousands of visitors annually. As a result, hostels and restaurants thrive, servicing the transient pilgrims. Of course, the walkers are only here today and gone tomorrow, many of them looking to spend as little as possible on a dormitory bed and a simple pilgrims’ menu. Nevertheless, the benefits of having a pilgrimage route passing by have not gone unnoticed. Now being marketed is the Camino Ignaciano, which traces the 16th-century footsteps of St Ignatius of Loyola, the founder of the Jesuits, from Azpeitia in Gipuzkoa all the way to Catalonia.

The Basque Country and Navarre offer several pilgrimages. The Camino Francés (‘The French Way’) is still the most popular route to Santiago and includes a stretch running from Roncesvalles down through Pamplona and across Navarre. (Before reaching the Pyrenees, there is excellent walking on the GR65 path through the French Basque Country, effectively a precursor to the Camino Francés.) 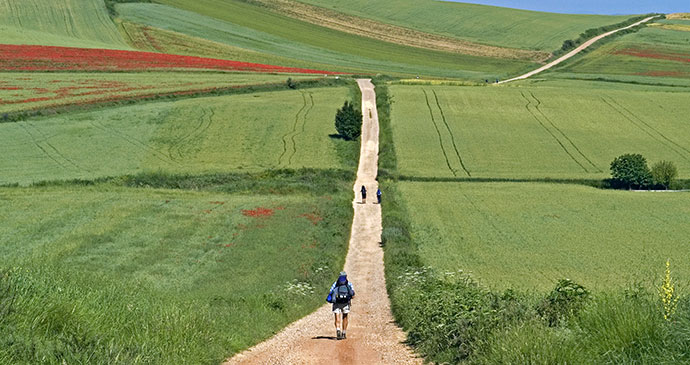 The Camino Frances is the most popular route to Santiago © Sjors737, Dreamstime

The Camino del Norte (‘The Way of the North’) from Irun follows a tortuously hilly trail via San Sebastián and Bilbao before exiting the Basque Country at Koboron, keeping walkers close to the sea at times. The Camino Interior (‘Inland Route’) again starts in Irun and heads south to reach Vitoria-Gasteiz and beyond, before leaving Álava province just beyond Zambrana.

Walking the camino trails will certainly introduce you to some of the best landscapes offered by this region. And despite claims that the whole thing has turned into a commercial circus, it remains a wonderful way of spending a holiday: fitness, fresh air, camaraderie, cuisine, history and culture as you pass slowly through. There’s still joy in having your credencial (pilgrim passport) stamped nightly in hostels, and a huge sense of achievement collecting your pilgrim certificate in Santiago de Compostela. Having now walked the camino three times, I can assure you that it is still an item that should be put on – and ticked off – that bucket-list.

Learn more about the Camino de Santiago in our guide: