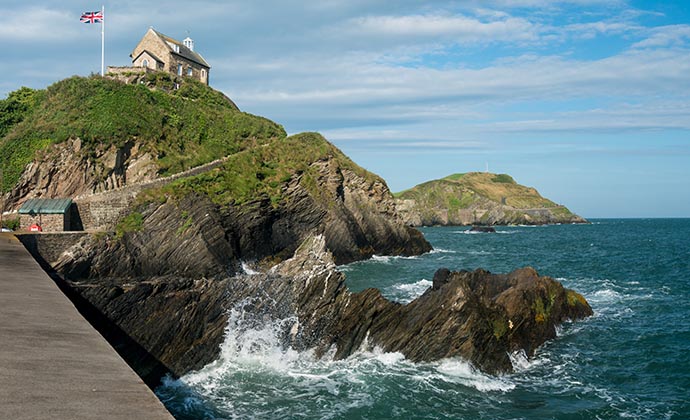 Into these churches English men and women have for centuries poured their faith, joy, sorrow, labour and love.

Some people go to church, others go to churches. I come into the latter category. I love what rural churches can show us of village life over the course of a thousand years. Simon Jenkins, in his wonderful book England’s Thousand Best Churches, sums up the appeal: ‘Into these churches English men and women have for centuries poured their faith, joy, sorrow, labour and love.’ In their artefacts and monuments these little churches – for the best are usually little – tell the story of the village, revealing the lives of the poor farm workers as well as their rich employers up at the big house. They are recorded in the oldest Norman font to the newest Women’s Institute kneelers. Nowhere else will you find this unbroken thread of history.

No old church is devoid of interest. Start with the lych-gate where you enter the churchyard. Lych was the old English word for dead body, so a lych-gate was a corpse gate. A few retain the slab on which the coffin rested during the burial service. In medieval times only the rich were buried in coffins; the poor used the parish reusable one, the corpse being wrapped in woollen material for burial. And it had to be wool or they paid a fine – a canny way to protect the wool trade.

Look up at the eaves. Are there gargoyles with ferocious faces spewing water from the run-off from the roof? They may be there to protect the church from the demons and devils that are trying to get in.

Then visit the tombstones. The early ones from the 17th and 18th centuries often have beautiful, though worn and mossy, lettering, and carved cherub faces, angel wings or skulls as emblems of mortality. Sometimes the inscription can be unintentionally humorous: if the stonemason made a mistake there was no simple way of correcting it. More often they are poignant, with graves of babies and young children all bearing the same family name. The 19th-century Victorian enthusiasm for epitaphs and poems adds further interest. For real hyperbole about the worthiness of the dead person, however, you need to read the inscriptions on the monuments to the rich and influential inside the church. The unquestioning belief – at least of the family that paid for the tomb – that the ancestor was whisked up to heaven to an altogether more enjoyable immortality is clearly stated.

Old churches are full of words. You walk on ancient memorial slabs – ledger stones – from the 17th and 18th century, beautifully lettered with intriguing abbreviations and roman dates (so brush up on your Latin numerals). More recent memorials, on the walls in brass or marble, commemorate the rich, influential or brave. And painted on the wall of most churches is a list of rectors or vicars. They often start in the 1200s, with the French names of the Norman clergymen, and continue in an unbroken line to the women vicars of today.

What mean those ridiculous monstrosities in the courts of cloisters; those filthy apes, those fierce lions, those monstrous centaurs, those half-men, those spotted tigers, those fighting soldiers and horn-blowing hunters. . . 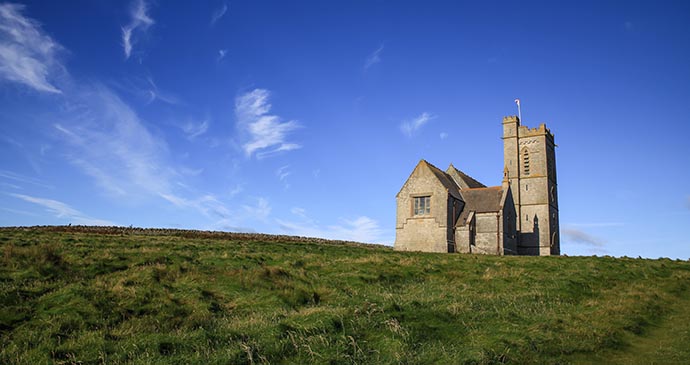 Most intriguing of all are the carvings, because we can only guess at what they mean. These are what bring me such joy in Devon’s churches. The tops of columns, capitals, are often carved with detailed and enigmatic faces of man or beast, but where the carver gave most expression to his imagination is in the wooden bench ends of the pews. Benches or pews in churches only came into being in the 14th century – before that the congregation stood – and were universal in the 15th, which is the date of the earliest of Devon’s examples. The subjects of the carvings are quite extraordinary. Where you would expect religious motifs you find, instead, creatures of the wildest imagination. And even in the 14th century these weren’t a new fad. The French abbot St Bernard of Clairveaux, who died in 1153, wrote: ‘What mean those ridiculous monstrosities in the courts of cloisters; those filthy apes, those fierce lions, those monstrous centaurs, those half-men, those spotted tigers, those fighting soldiers and horn-blowing hunters; many bodies under one head, or many heads on one body; here a serpent’s tail attached to a quadruped, there a quadruped’s head on a fish; here a beast presenting the foreparts of a horse, and dragging after it the rear of a goat; there a horned animal with the hind parts of a horse?’ He accurately describes the decorative church art that persisted for another five centuries until a more demure mindset took over. You will find many different explanations for the carvings in church booklets; personally I enjoy the mystery.

Dividing the nave, where the congregation sits, and the chancel leading to the altar, is generally a beautifully carved wooden screen, often called a rood screen since the rood, a beam on top, carried the figures of the crucifixion. These were all removed during the Reformation or by the Puritans in the Cromwell period. In the panels between the supports you can still find charming painted portraits of saints, rich with symbolism. These, too, were often damaged – literally defaced – by the reformers. North Devon and Exmoor churches, however, seem to have fewer painted panels than other parts of the county.

While on the subject of old wood, look out for the ancient alms boxes and chests used to store church documents. The oldest of these may be cut from a single log, and many are bound with iron bands and have more than one lock to secure them.

Carvings, both in wood and stone, are found on and over the font. This basin holds holy water for baptism, and is often the oldest thing in a church. Rough-hewn Norman stone fonts are quite common, as are more intricately carved ones from the same period, sometimes depicting strange creatures or faces. These may represent the demons being expelled through baptism. In the 13th century the Archbishop of Canterbury ordered that fonts should be covered to prevent the theft of holy water. The carved wooden covers became increasingly elaborate until they could only be raised by pulleys.

The aristocracy have their own lavish memorials. Some marble tombs occupy quite a large proportion of the church, with elaborate canopies, heroic inscriptions and depictions of the nobleman either in life or death. Dead knights in armour have their feet resting on lions, to symbolise courage, whilst their wives often have a dog for fidelity. Studying these effigies and the memorial brasses set into the floor is an excellent way to learn the history of costume and armour.

Finally the most eye-catching and least enigmatic features of a church: the stained-glass windows. Being vulnerable to storm and sabotage, many of the medieval ones have perished and most are now Victorian. But early ones do survive and charmingly represent the contemporary idea of the Bible stories.

Churches in Devon and Exmoor are rarely locked during the day. Give them the time and attention they deserve. You can find out more about some of my favourites in these articles on the best churches in North Devon, East Devon and South Devon.

A glossary for church visitors

Finding your way around a church using the information leaflets is helped by understanding church terminology. To begin with you need to know that the altar is almost always positioned in the east end; you can then easily work out which is the south aisle and so on.

boss Carved and painted knob at the intersection of roof beams.

choir stalls The seating in the chancel, between the altar and the screen, where the choir and clergy sit.

Green man A face, usually carved in stone in the capitals above columns, with foliage coming from its mouth and ears, and incorporated into its hair. Thought to be of pagan origin, representing fertility.

misericord A hinged shelf in the choir stalls to support the standing occupant during long services.

nave The main body of the church where the congregation sits.

piscina A small basin, usually in the chancel, for washing holy vessels.

poppyhead A carved, three-dimensional figure on top of a bench back or end. The word derives from the Latin puppis or French poupée meaning doll or figurehead (as in a ship).

Reformation The separation of the official church from the Roman Catholic faith leading to the adoption of Protestantism. It was started by Henry VIII in 1534, led to the Dissolution of the Monasteries in 1539. In 1549 the order went out to destroy ‘superstitious images’; this is when the most damage was done to country churches, completed a century later by Cromwell’s Puritans.

reredos A painted or carved screen behind the altar.

wagon roof Also known as a barrel roof, a semi-circular beamed roof running the length of the nave.