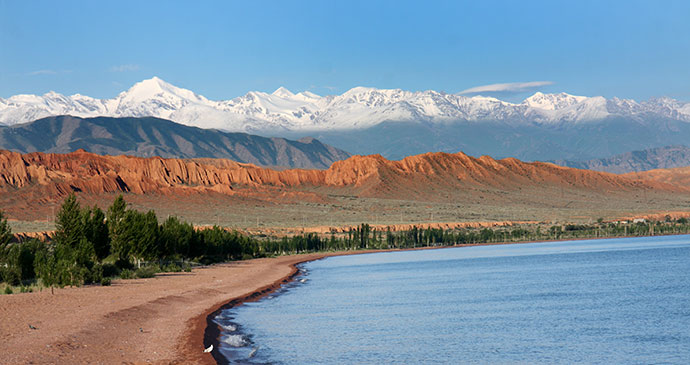 Lake Issyk-Kul has provided inspiration for a number of myths over the centuries © Novoselov, Shutterstock

One legend relates the tale of a king who had ears like an ass.

The king’s barbers were ordered to hide his ears and then each was killed in order to protect his dark secret. Understandably, the king soon exhausted the kingdom’s supply of barbers and so was obliged to spare the last one, swearing him to life-long secrecy.

The task proved too much for the barber, who fled to the mountains and asked a local hermit what he should do as he was tortured by the burden of his secret. The hermit suggested that he whispered the secret to a well, shutting the cover carefully after he did so.

The barber did as he was told and announced his secret to a town well but he forgot to cover it afterwards. As a consequence of this, the water of the well rose up to flood the large-eared monarch’s kingdom. Lake Issyk-Kul is said to be the result of this flood, its waters coming from the rising well of the legend.

Another story tells of a beautiful city that stood where the lake is today. One day, some young girls from the city went to the mountains to collect firewood. In their absence an enormous earthquake took place, flooding the city and killing all of its inhabitants.

The girls came home to find a big lake where their city used to be. They were so grieved by the loss of their relatives and friends that they returned every day to the same place to mourn and weep. The salt of their tears slowly turned the lake’s waters saline, which is why it does not freeze today. A third tale tells of a cruel khan who once governed over a wonderful city. One day he saw a beautiful girl on a riverbank and immediately he wanted to marry her. The girl, however, was unimpressed and refused his proposal. Incensed by her refusal, the khan imprisoned the girl in a high tower until she changed her mind.

Trapped in her prison tower she cried bitter tears and prayed to the heavens to take pity on her. Her prayers were soon answered and the river that flowed through the town burst its banks to inundate the whole town. Everyone perished in the flood – the khan, the girl, the townspeople – and since that day the lake formed by the flood has been salty and changeable: sometimes it is calm and quiet, like the dead girl; at other times, it is threatening and violent, like the tragedy that created the lake.

This final legend has similarities to the story of the ass-eared king. Many years ago there was a big city where Lake Issyk-Kul is located today. The ruler of the city was Khan Iskender, a cruel and violent man who lived with the terrible secret that he had a pair of horns on his head. To keep the secret he routinely executed everyone who came to cut his hair or to shave him. One day it was the turn of the son of a poor old widow to clip the khan, and his mother was fully aware of the risk to her son.

The widow cooked three round cakes made of her own milk and told her son to take them to the khan. On visiting the khan the son dropped the first two cakes as he had been told, but when he dropped the third cake the khan picked it up and tasted it, declaring it to be delicious. The khan asked what the cake was made of and, on being told, he realised he had inadvertently become a maternal brother of the son.

Because of this the son was spared, but made to promise to keep the khan’s affliction secret. On the third day of visiting the khan the son was suffering from a stomach ache and an overwhelming desire to tell someone of the khan’s secret. The khan ordered that a well in the middle of the town be opened up so that the boy could yell down it, ‘Our Iskender Khan is two-horned!’ On his third cry, water burst out of the well and flooded the city, thus creating Lake Issyk-Kul.