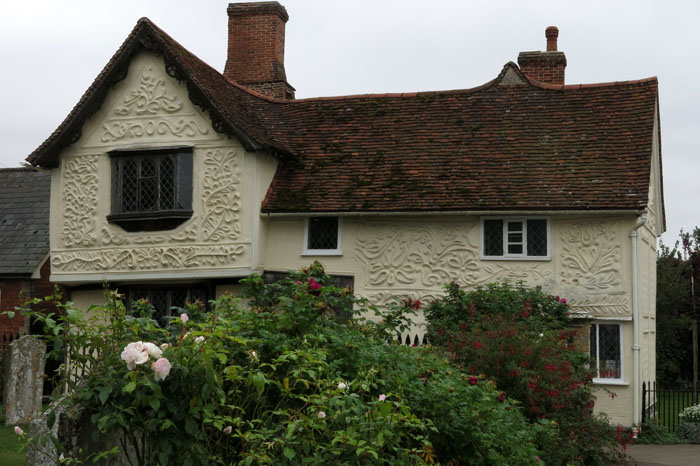 This decorative art displayed on the outside of cottages, such as this one in Clare, is often found in Suffolk © Laurence Mitchell

Pargeting is the traditional art of decorative plastering on the walls of houses. The technique involves moulding wet lime plaster to create a form of bas-relief. Pargeting is most commonly seen in Suffolk although there are examples in other parts of East Anglia like Norfolk, Cambridgeshire and Essex. There would have been plenty of pargeting on show in London too before the Great Fire of 1666 destroyed it all. It is most commonly seen on buildings that date from the 16th or 17th century when the art reached its zenith although there was also a revival of interest during the Arts and Crafts Movement of the late 19th century. There are also a few contemporary examples. The art probably began in the time of Henry VIII but no pre-Elizabethan examples survive. The best examples in the county are The Ancient House in Ipswich and on the County Museum (also known as ‘The Ancient House’) in Clare.

Interested in visiting Suffolk and learning more about its architecture? Our new and all-inclusive guide will be your indispensable companion: