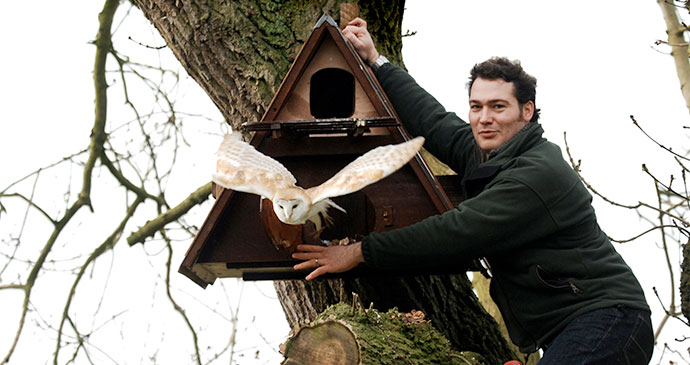 A white owl bounces over
the hedge top
As if on puppeteer’s strings
So bright and alive it
illuminates the dusk
So buoyant, it seems its
wings are stretched
To keep the Earth from
losing it
What heart this bird must
have
To fill so slight a body with
such energy…

Barn owls have inspired poets and artists since ink and paint existed. They provoke conflicting feelings of love and fear, being the nation’s official favourite farmland bird but also a traditional omen of death. In living memory they were skinned and nailed to doors to ward off lightning storms.

These eclectic birds are in trouble though. Nationally, their numbers have dropped by 75% since the 1930s, yet I have seen more in the last two years in Ryedale than in the rest of my 40-odd years of birdwatching elsewhere in the country. What is it about this part of Yorkshire that suits Tyto alba? The obvious person to ask was Robert Fuller. Robert is one of Britain’s leading wildlife artists, but also a passionate conservationist with a special interest in barn owls. He directs operations from his home at Thixendale on the Wolds side of the Derwent Valley.

‘I set up the Wolds Barn Owls Group with friends a couple of years ago. It’s a real handson project where we make and put up barn owl boxes on farms on the Yorkshire Wolds. We’re an enthusiastic team and have great support from the local community. Barn owls have had problems from all angles.

Barn owls have had problems from all angles. A lot of their habitats have changed because there are bigger fields these days and different farming methods. And the old traditional brick farm buildings they liked to nest in are no longer used … a lot of them have been converted, knocked down or have fallen down, so it is important to provide them with an alternative nesting site. Dutch elm disease has been a big problem as well. The elm trees were often important as they had good hollows for owls to nest in, but now all those trees have fallen down and rotted away.

I’ve designed my own nest box for the project. Normally the male barn owl has to find a new home once the chicks are born and people tend to put out two boxes. My boxes have two compartments with a little penthouse area for the male to live after the chicks arrive. We’ve put up nearly 200 boxes across our area and about half are occupied – that’s a healthy population of owls. It is good to know that, despite the pressures of habitat loss and harsh weather limiting hunting, at least the barn owls won’t be short of a place to nest. I’ve always had a particular affinity for barn owls and they often feature in my paintings – it’s nice now to give something back.’

Learn more about the wildlife of the North York Moors and Yorkshire Wolds in our new guide: