WANTED  A local publisher is looking for someone to work 2-3 hours a week to help with typing and occasional packing of parcels. Following an interview for this post in 1977, held in Hilary Bradt’s parents’ beautiful garden, I was given and ‘passed’ the test of composing and typing a letter to appease a disgruntled customer. So started my 40-year association with Bradt Travel Guides. 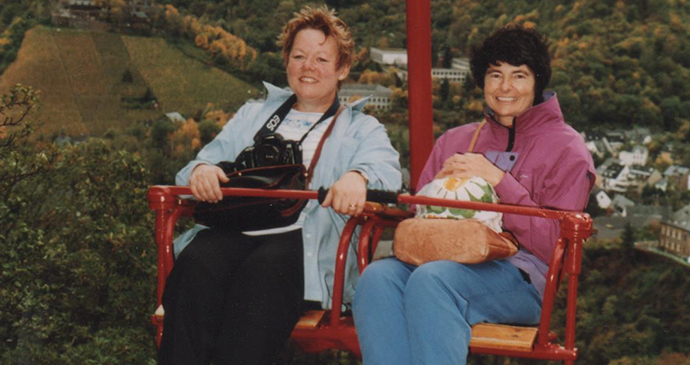 The few hours a week increased to several days and eventually, inevitably, full-time employment.  Hilary and her then husband, George, regularly travelled abroad for several months at a time to research and write books and Bradt Enterprises, as it was then called, was soon being run from my home. My family adapted to life living with a publishing business – huge boxes of books arriving on pallets and having to be man-handled into our loft, unexpected visits from foreign customers, the postman calling to collect sackfuls of outgoing mail and parcels each day and, after a while, having other people working alongside me in the office (conservatory). The boxes of books in the loft caused a moment of panic on one occasion. My husband was decorating our bedroom and, as he carried a large piece of hardboard across the room, it suddenly became stuck. Looking up, he realised the ceiling was bowing and the hardboard had caught on the protuberance.  A quick visit to loft found a large box had slipped off a joist and was likely to fall through the floor into the room below at any moment! Needless to say, we soon started renting space in a warehouse. And as for unexpected visitors – one day at 6.30am I was awoken to the sound of the door bell ringing. Hastily wrapping myself in a dressing gown I flew downstairs to find two Italian gentlemen at the front door asking to buy South American maps.  They spoke very little English and my Italian stopped at ciao, per favore and grazie, so it was an entertaining encounter to put it mildly. 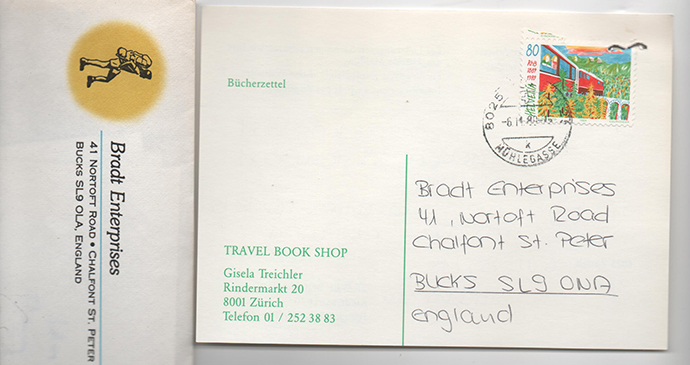 In the early days Janet handled postal orders and stored the books in her loft! © Hilary Bradt

Hilary would arrive home from a trip abroad with massive rolls of South American hiking maps, which had to be sorted and folded. We sold these alongside our own guidebooks plus a few imported titles. Along with the typing of invoices, letters, publicity pamphlets and catalogues, folding maps, packing boxes and dealing with an increasing number of telephone enquiries, I soon added the accounts to my repertoire of activities.  Hilary’s father, affectionately known as ‘Hod’, was my mentor for the accounts, in those days all done by hand in large ledgers. I used to visit Hod at his home, where I learned to balance the books to the last penny each month, do half-yearly and then the annual accounts ready for audit. This job was carried out on a large table in Hilary’s parents’ breakfast room, accompanied by Flint the African grey parrot, who sidled along the back of a chair opposite me, head on one side, watching my every move. 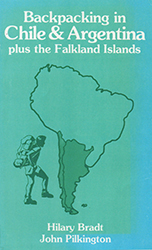 In 1979, following a very stressful experience with a typesetter, it was decided that I should type the next book to be published, Backpacking in Chile & Argentina, and I was bought an IBM golf ball typewriter for the job (this was long before the advent of word processors/computers!). The book was booked in to a printers in Boston, USA. The author, John Pilkington, came to my house on the Wednesday to do the final alterations and fill in all the accents by hand. In those days alterations were a ‘cut and paste’ job on to hard copies.  At midnight I finally went to bed, leaving John in my dining room, still cutting and pasting.  When I got up the next morning (after not much sleep, I must admit) it was to find John’s bed unslept in and John still sitting at the table, fingers covered in glue, but with a look of satisfaction on his face.  After a quick breakfast, John drove to Heathrow cargo terminal and handed in the manuscript with 12 minutes to spare. This title was followed by the second edition of Backpacker’s Africa: A Walker’s Guide to East, Central and Southern Africa. I typed the text as well as designing the cover and layout of the book.

In 1987, with the business growing rapidly, Hilary hired Dilys Saunders as my assistant. Dilys not only packed and mailed books, typed newsletters, soothed shippers and calmed customers, but also became and remains a much valued friend. 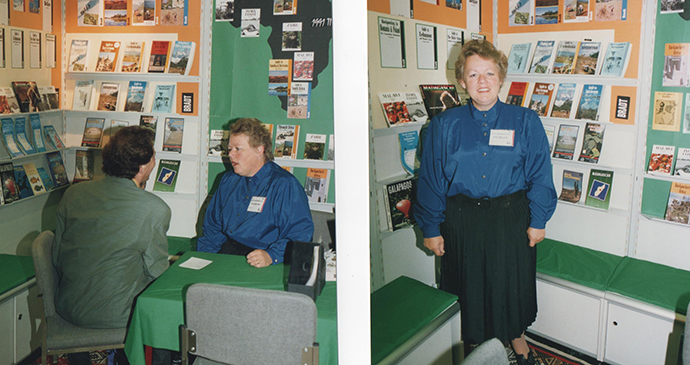 In 1982 we had our first stand at the London Book Fair, held at Grosvenor House, and in 1988 we started attending the Frankfurt Book Fair, which I continued going to for ten years. Hilary and I mainly travelled in her car, from Sheerness in Kent on the ferry to Belgium and then across country to Germany. I had never driven abroad before and I vividly recall Hilary saying to me, as we drove along an autobahn, ‘you can overtake you know’!  On our first visit, after a very long day of driving and then setting up the stand, as we tried to find our way in the dark to our lodgings in Petterweil, a  20-minute drive out of Frankfurt, another driver started flashing their lights at me. Getting cross, I tutted, wondering what was wrong, until the realisation hit that I was driving on the wrong side of the road!  So the driving was quite a challenge to start with, but I ended up driving round Frankfurt (often several times a day when we got lost trying to find our way home at night) with Germans in the back of the car, with relative confidence.  Our Frankfurt visits in the early days were times of making contacts, taking orders, selling foreign rights and enjoying dinners with other publishers in the evenings. We used to add up our orders at the end of each day, rubbing our hands in glee as the total escalated.  For three years our time at Frankfurt was followed by a two-night stay at Odenwald along with fellow publishers from Germany, the USA and Australia – a lovely time of unwinding, walking in the Black Forest, collecting mushrooms, playing games and laughing together. 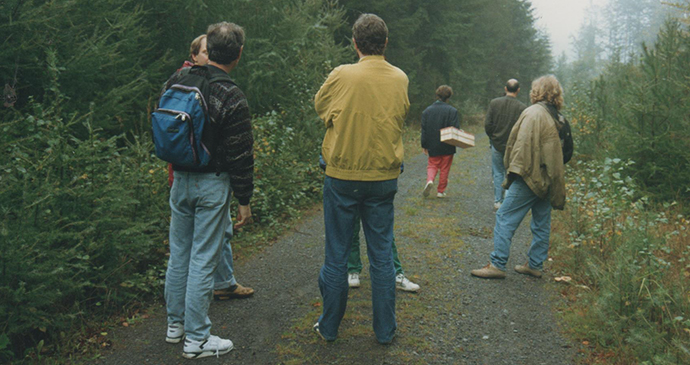 Gradually, more people were employed in varying part-time capacities: Dilys Saunders, Tricia Hayne, Jenny Boyce and then, with much excitement, our first full-time graduate, Debbie Everson.  Each played their part in developing Bradt Enterprises, then Bradt Publications and, finally, Bradt Travel Guides. The IMB Golf Ball typewriter was replaced by an electric typewriter (killed by my son, who spilled a cup of tea over it) and then, finally, a computer. This led to an accounts package being installed and me having to learn to use it, giving up my beloved handwritten ledgers. 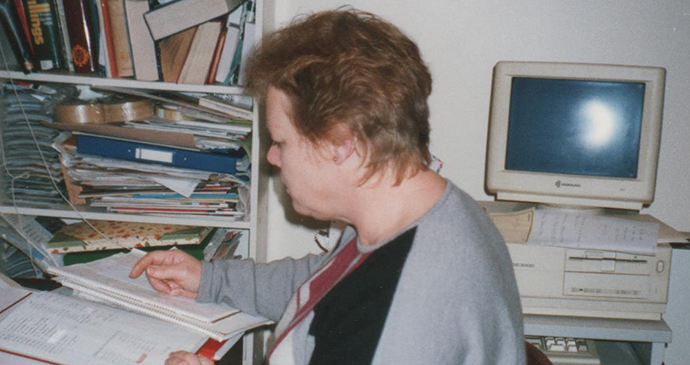 In 1999 I decided the time had come to retire. Debbie Hunter was employed to take over from me and shop premises were obtained in Chalfont St Peter’s high street. Was that the end of the story? No. Some eighteen months later I was asked if I would like to work for a day a week to help with whatever was needed, as the business was expanding. I didn’t need to think about my answer and very soon one day turned into a day and a half and eventually two days, which is what I am still doing. The business moved premises again; and I now work as an editorial assistant, a job I thoroughly enjoy. 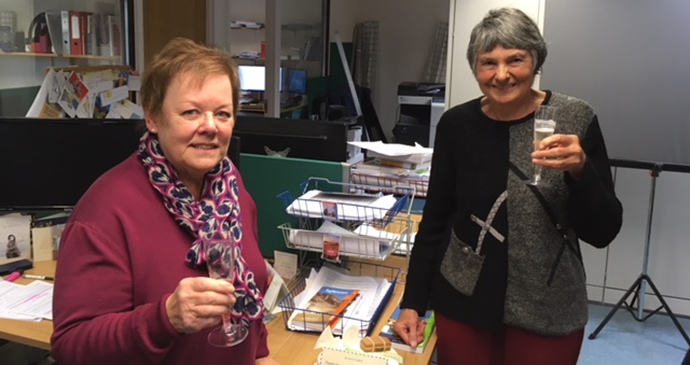 Bradt is like my third baby – loved and nurtured over the years and now earning its place in society!