Iain Campbell has been fascinated by mountains for as long as he can remember. It was while travelling the Tibetan section of the Silk Route that he was inspired to follow the course of the Indus, one of the great rivers of the Indian subcontinent, which runs from its source in Tibet to its mouth near Karachi in Pakistan. This mammoth journey has been documented in his second book, From The Lion’s Mouth – here are some of his highlights. 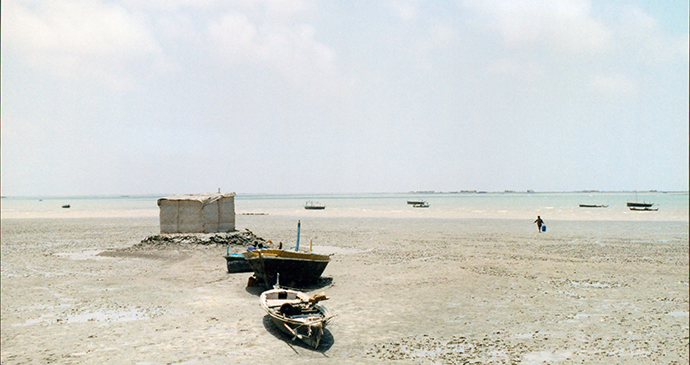 ‘I had decided to follow the Indus from mouth to source, but it took me some time to work out exactly where I should begin. In the end I settled for a town called Keti Bandar, which on my not very accurate map looked to be the furthest south of the small towns built on the Indus delta.’ 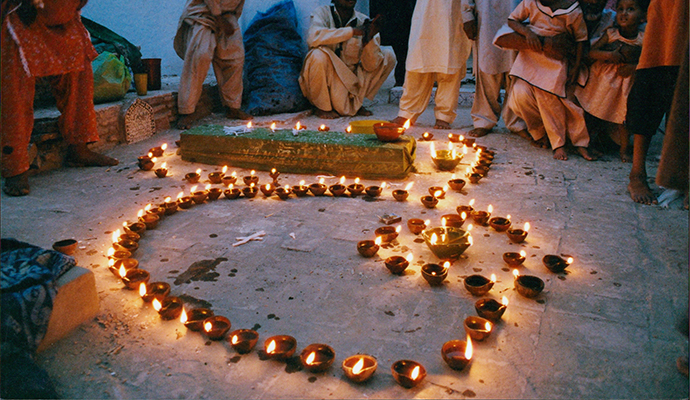 The shrine of Shah Abdul Latif, one of Pakistan’s most famous poets © Iain Campbell

‘In Sindh, as I made my way north from Karachi up the east bank of the Indus, my journey was measured in shrines. In my own way I became a shrine devotee, seeking out the curved domes on the skyline and detouring away from the main road to tiny villages where saints had expired centuries before. Thursday night is the night of activity at Sufi shrines, the night before the day of prayers. I always tried to make sure I was near an interesting shrine on a Thursday. Bhit Shah is the shrine of one of Pakistan’s most famous poets, Shah Abdul Latif. A man approached me as I sat beneath a tree in the courtyard sketching the saint’s mausoleum, and spoke in English. ‘I was told there was a foreigner visiting today but I did not recognise you. You look like a Pakistani. Where are you from? Would you mind if I talked to you?’ He crouched as he talked, bringing his face level with mine and tilting his head deferentially. When I nodded he sat down beside me and introduced himself as Nadir. We talked in the shade of the neem tree while the Thursday afternoon pilgrims milled around us.’ 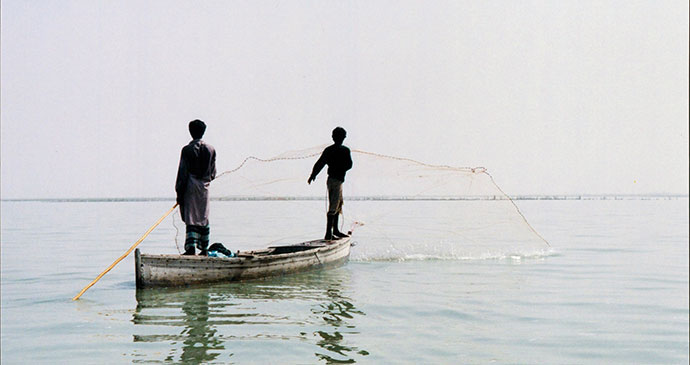 ‘Lake Manchar is fed from the Kirthar hills to the west and acts as a safety valve for the Indus, taking massive inflows when the river floods and draining it back out again in the low season. We arrived during the morning fish market. The fish were plump and silver-scaled and they were laid out on chipped ice.’ 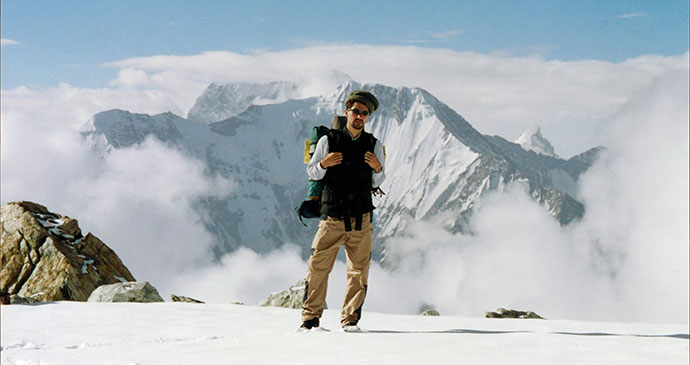 ‘The Daimir face stretched above us and there, between teeth of snow-stuck rock, we could see the summit of Nanga Parbat for the first time – a small, unremarkable black pyramid holding a wisp of cloud and, because it was further away, looking lower than the white teeth around it. I wondered if the name Naked Mountain was accurate. The summit is naked in the sense that it is not covered by snow but it is protectively flanked by the surrounding tops and ridges, the peak only visible from one side, and then only just. Not like the self-assured pyramid of K2 or the rambling but obviously summited Rakaposhi. Rather than being naked, Nanga Parbat looked to me like a hidden mountain, a mountain in purdah.’ 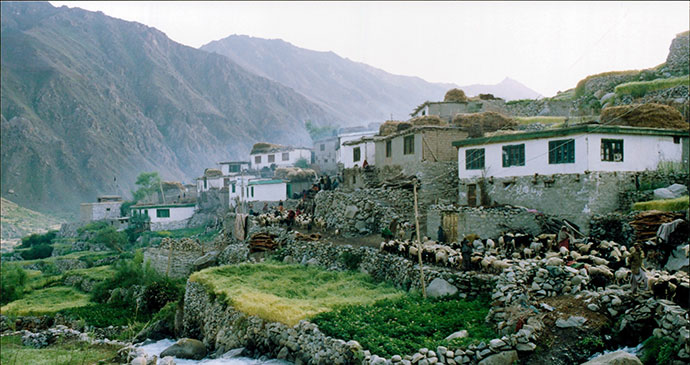 For Iain, Katishoo felt like Tibet rather than Pakistan © Iain Campbell

‘Katishoo village felt like Tibet. The houses were square and painted white with regular, deep-set, ox-blood window frames and protruding roof beams. We drank tea from bowls, not cups and saucers as in the rest of Pakistan, and it arrived with a dish of tsampa – roast barley flour – and a spoonful of butter, which we mixed together in the bowl to make a thick malty porridge, Tibetan style. We stayed with one of Mansur’s friends, whose features looked both Tibetan and Chilasi, a mix of curly hair, high cheekbones, narrow eyes, stockiness and a hook nose.’ 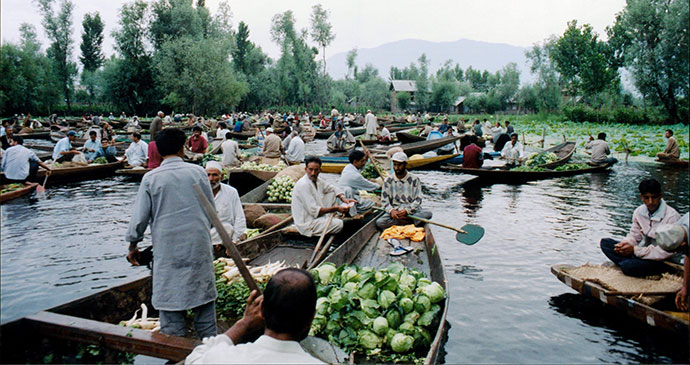 ‘I got into Srinagar in the evening. It was dark and from the shore of Dal Lake I could see the illuminated ranks of houseboats. Indian tourists arrive with bookings on luxurious colonial-style houseboats modelled on those built by the British, centuries before, to get around the property restrictions imposed by the Maharaja of Kashmir on foreign dwellings. In behind the floating tourist residences are houseboats where Kashmiri families still live and where less-well-off tourists can arrange cheap homestays. The homestay touts lined the shore road and thrust business cards and photographs of boats at me. A slight, wiry man tugged at my rucksack, ‘homestay, homestay’. He stared up at me from sunken eyes.’ 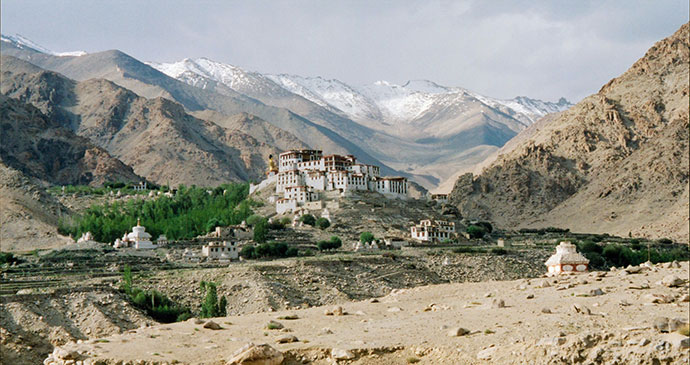 ‘On the opposite bank, an hour further up the valley, was Likir Gompa. The monastery, with its rhythmic dots of ox-blood-red window sills, stood against a backdrop of snow-flecked hills. From the roof I looked down on the diamond-shaped mound which formed the snake’s head – it even seemed to have a forked tongue, made of fallen rocks tumbling into twin streams. I looked beyond that to the hillside dappled with sun and snow and further down to the green-brown of the Indus. In Kashmir I had been away from the Indus for two weeks and now it felt good to be back with its familiar presence. It had been a long detour to get here and it was strange to think that theoretically, if I could survive the cold and the rapids and evade whatever security they had at the border, I could probably float down to Skardu, which I had left over a week before, and be there in a few hours.’

Read more of Iain’s tales from his journey along the Indus River in his book, From The Lion’s Mouth: