In an extract from our new anthology, Beastly Journeys, Sheelagh Reynolds tells of her travels through Morocco and the souvenir she didn’t expect to be bringing home.

My friend and I had come to the end of a wonderful Moroccan odyssey that had taken us from the fishing port of Essaouira in the west, up into the High Atlas Mountains in the centre of the country, down again to the souks of Marrakesh and Fez and now, in enchanting, pastel-blue-washed Chefchaouen, I was intent on a last-minute gathering of mementos to jigsaw into my luggage. A small rug, an ammonite – definitely; a wrought-iron framed mirror – possibly; a mosaic-topped table – almost certainly not. But not in my wildest dreams had I considered Habibi. 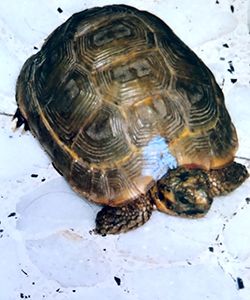 Out of the corner of one half-closed eye, I gradually became aware of movement emanating from a small, dome-shaped object in a cage about twelve inches square set on the cobbles nearby. First one scaly little leg, then another; then two more legs extended very, very slowly out from under a tiny carapace. At the front end an ancient face; at the back a small, pointy tail. A tortoise, an excuse for a tortoise, smaller than the palm of my hand, banged up in solitary in the fearsome heat with no food and no water. ‘Help me!’ he (or she) was surely crying as he banged into the bars of the cage and opened his mouth to reveal a shiny pink interior. And so I did. I bought him and took him away in a plastic bag.

Back in our hotel Habibi – the name means ‘my love’ in Arabic – very quickly made himself at home. I had bought provisions – tomatoes, greens, a carrot – while the lid of a nearly empty jar of Nivea sufficed as a water bowl. Habibi immediately tucked in, employing his rather large tongue to get the food into his mouth and making surprisingly loud crunching noises for a creature so diminutive. Having completed his meal he wandered off under the bed, tucked all his bits back inside his shell and proceeded to do a very good impersonation of a pebble.

The next step should probably have been to return Habibi to the surrounding barren hills where he could meet up with his kind and live happily ever after – if not recaptured. But this is not what happened. I had recently buried my old dog and missed him dreadfully. I wanted some animal companionship, someone to welcome me home after a long day at work, and it occurred to me that Habibi might just fit the bill. This would, of course, involve smuggling… 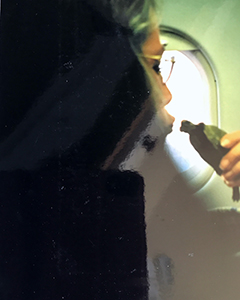 From Chefchaouen we travelled to the port of Ceuta. Here were two custom points, because although Ceuta is on the African continent, it is in fact Spanish and there is a no man’s land and rather a lot of armed guards overseeing emigration. Over the water, at Algeciras, lay number three.

Habibi was nonplussed and obligingly continued his pebble impersonation in my rucksack. However, and perhaps in the nick of time, it occurred to me that if he were to extrude his six appendages, namely head, tail and four limbs, his image on the X-ray machine might give the game away. And so, at each of the five challenges, I tucked him down the front of my jeans and took him though the metal detector arch with me. Tortoise in pants, heart in mouth.

Sheelagh Reynolds was born and brought up in Jersey and lived in Hong Kong and New Zealand for a good part of her adult life. After retiring from a late-onset career in midwifery she embarked on a year of solo travel, and is currently pondering what on earth to do next.

Want to read the rest of Sheelagh’s story? Get 10% off Beastly Journeys here: