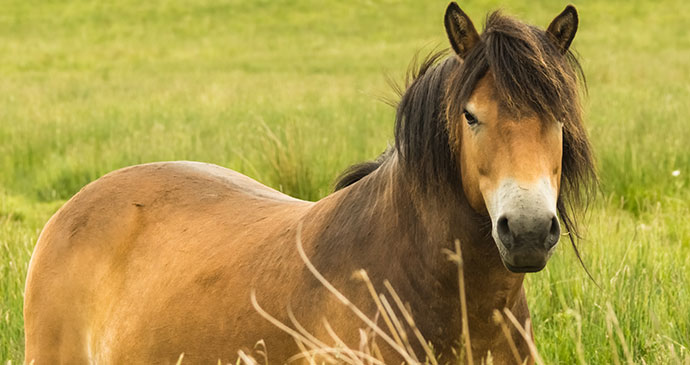 Today there are about 300 free-living Exmoor ponies on the moor and about 1,300 worldwide © Roger Hall, Shutterstock

The most obvious thing about Exmoor ponies is that they all look remarkably similar – short and hairy, with brown bodies that are dark on top and lighter underneath, dark legs and hooves and a characteristic ‘mealy muzzle’ (an oatmeal colour over their muzzles and round their eyes). White markings are not permitted on registered Exmoor ponies.

The distinctive colour of the Exmoor pony has led people to believe that it is a direct descendant of prehistoric wild horses, but neither recent genetic research nor studies of documentary evidence support this view. However, it is still a valuable and rare native pony breed.

During the early 20th century it became fashionable to ‘improve’ native ponies with Arab and Thoroughbred bloodlines, so in 1921 several local breeders got together and formed the Exmoor Pony Society with the purpose of keeping the breed true to type.

The ponies nearly died out during World War II; most of them were killed for food, leaving only about 46 mares and four stallions, but the local farmers soon re-established their herds with the help of a remarkable lady called Mary Etherington.

Today there are about 300 free-living Exmoor ponies on the moor and about 1,300 worldwide, but only a fraction of these are used for breeding. There are 20 moorland herds on Exmoor, including two owned by the Exmoor National Park Authority.

All the Exmoor pony herds that graze the different areas of moorland are free-living (not truly wild, like red deer) because they are owned by farmers with grazing rights on the moorland. For most of the year the ponies fend for themselves, but in the autumn they are rounded up and the foals are weaned and inspected. Until recently all foals that passed inspection had to be branded, but microchipping is now allowed as an alternative to branding.

Exmoors are well-camouflaged in their natural moorland habitat. However, you will have a good chance of spotting them on Haddon Hill (near Wimbleball Lake), Winsford Hill, Withypool Common, Porlock Common, Dunkery Hill, Countisbury, Ilkerton Ridge and Brendon Common. Please don’t try to feed the ponies as it encourages them to associate cars with food, which means they are more likely to be victims of a traffic accident. Also, ponies can be dangerous if they start fighting over food.

Recently a week in August has been set aside for an Exmoor Pony Festival, held throughout the area, and it seems likely to continue. If you would like to see ponies at close quarters, and perhaps ride one, visit the Exmoor Pony Centre at Ashwick, near Dulverton. And for more information about the ponies, or if you are interested in buying one, the Exmoor Pony Society website is a useful starting point.