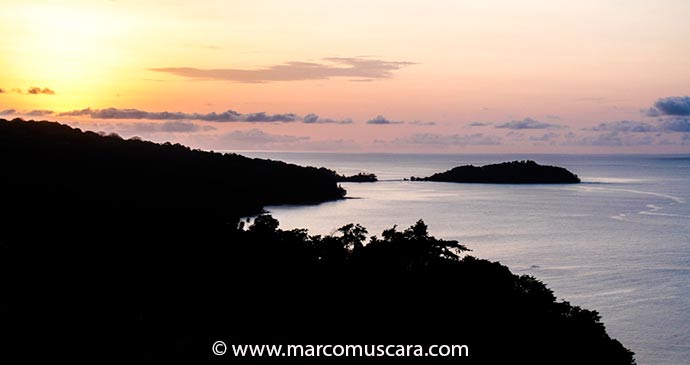 Bom Bom means ‘Good Good’ in Portuguese, and this four-star resort in the north of Príncipe is truly a slice of paradise © Marco Muscarà, www.marcomuscara.com

With thanks to Dr Bob Drewes, California Academy of Sciences, for the 2014 update

São Tomé and Príncipe lie in the Gulf of Guinea, some 250km east of Gabon on the African mainland. At 1,001km², the archipelago is the second smallest country in Africa after the Seychelles; it is roughly three-quarters the size of Greater London, or a third of Rhode Island state. Nicknamed the ‘Centre of the World’, it is the closest land mass to the point in the Atlantic where the imaginary line of the Equator crosses the zero meridian. The larger island, São Tomé, has a surface area of around 854km² and lies 250km off the Gabonese coast.

At 142km², Príncipe, some 150km to the northeast and 225km off the coast of Equatorial Guinea, is about nine times smaller. Both islands are criss-crossed by rivers; on São Tomé most rivers have their source in the Obô National Park, around the Pico de São Tomé. The islands’ soil is fertile, thanks to their geologic make-up. São Tomé and Príncipe form part of the 1,200km Main Cameroon Line volcanic chain, stretching southwest from the Nigerian Jos Plateau on the mainland and including Bioko (previously called Fernando Pô), Príncipe and São Tomé down to Anobón (previously called Pagalu).

This separate evolution and zoogeographical isolation accounts for the high level of endemism: many plant and bird species can only be found here, making the islands a paradise for wildlife lovers, birdwatchers and botanists.

Both Bioko and Anobón now belong to Equatorial Guinea. Geologically, São Tomé and Príncipe consist mainly of hard undersaturated basalt lava – the Holocene shield volcano – that is reflected in the landscape of greatly eroded, precipitous mountains and dramatic phonolitic rock towers rising up vertically out of the rainforest of the south: the mighty Cão Grande, or Pico Caue (633m), and its smaller and slightly more drooping counterpart, Cão Pequeno. The latter, curiously, is only really visible from the Ilhéu das Rolas, unless you take to the southwest on foot.

Phonolite is much more resistant to weathering and erosion than basalt; these volcanic plugs or dikes were created by the phonolite intruding into a basaltic volcano, and the softer surrounding basalt subsequently eroding away. Most of the time these phallic-looking towers are shrouded in mist, leite de voador (‘flying fish milk’); getting a clear shot of Cão Grande has defeated more than one photographer. The oldest part of the archipelago is Príncipe, which has been reliably dated to 31 million years.

Volcanic activity stopped earlier here than on São Tomé, some 15.7 million years ago; the island is much more deeply eroded, resulting in spectacular phonolitic rockscapes on a small surface area, seen particularly well along the southern coast. The oldest exposed rock on São Tomé is the Ilhéu das Cabras off the northern coast of São Tomé, at some 13 million years of age. The most recent dated volcanic rock, the basaltic cinder cones, mainly in the southeast of São Tomé, only formed around 100,000 years ago. The fact to remember to impress your friends is that São Tomé and Príncipe are respectively three and six times older than the oldest Hawaiian and Galapagos islands.

At each side, the islands’ rocky flanks plummet down to a depth of 3,000m below sea level, with a large part of the continental shelf around Príncipe – the archipelago was never part of the African mainland. A look at Google Earth will show you the original outline of Príncipe, with the Tinhosa Islets, the original southern tip of the island, some 30 million years ago. This separate evolution and zoogeographical isolation accounts for the high level of endemism: many plant and bird species can only be found here, making the islands a paradise for wildlife lovers, birdwatchers and botanists.

While the equatorial climate means maximum average daily temperatures of 27˚C to 29˚C, there is a massive difference in rainfall across these small islands. The dry savannah area in the rain-shadow to the northeast of São Tomé island, including the capital, only receives around 60cm of rain per year, whereas the mountainous southern and western parts of the island, in the path of the mainly southwesterly winds, receive about 6m. Of the two islands, Príncipe has the wetter climate, again with the south of the island receiving much more rain than the north. Most rain falls in March and April.

While you can visit the islands at any time of the year, the most popular time is during one of the two dry seasons, either between June and September, or around January or February. Temperatures on the islands hover around 27˚C all year round, but the summer months of the long dry season, gravana, are the best time for hiking and birdwatching. August visitors in particular have a good chance to catch popular saints’ feast days and cultural events, where the streets throng with stalls, open-air discos and entertainment; don’t miss the unique tchiloli and Danço Congo dramatic performances. Every other summer (around mid-June to mid-July), in even years, the Bienal cultural festival takes place in the capital.

Mid August, around the St Laurent’s festivities, is an ideal time to visit Príncipe, to catch the colourful spectacle of the Auto de Floripes, the biggest celebration on the smaller sister island. To see humpback whales migrating, you have to come between August and October. Another good option is the short dry season, gravanita, which lasts from around mid-January to mid-February, including carnival celebrations which are a good opportunity for seeing traditional dances. This period is good for birdwatching too, as the birds are sporting their mating plumage. Between November and March visitors may watch marine turtles laying their eggs, and hatchlings being returned to the sea between September and April. Divers will find best visibility between December and March.

The rainy season is best for orchid spotting, but if you want to see orchids and still be comfortable hiking, a lot of the species growing above 800m are still in flower in January.

However, January, February and March are the hottest months of the year, with the dry and dusty winds blowing sand from the Sahara into the Gulf of Guinea, often clouding the scenery in a ‘Harmattan’ haze, locally called bruma seca. In the rainy season between October and May, hiking becomes tricky on muddy terrain and the air is heavy with humidity, but photographers will find better light, blue skies and brighter contrasts. After finally braving the rainy season with tour groups, I personally would recommend November. Days can be a mixed bag: you might get rain in the morning, then a beautiful afternoon, with blue skies and the air feeling fresh after the tropical downpour, then a more cloudy evening with some rain, or a string of days where it only rains in the afternoons and evenings.

The rainy season is best for orchid spotting, but if you want to see orchids and still be comfortable hiking, a lot of the species growing above 800m are still in flower in January. This is also the start of the saints’ days season, beginning with São Isidro in Ribeira Afonso on the main island in late January, and on Príncipe with the celebrations of the discovery of the island on St Anthony’s Day, 17 January.

Hike through dense rainforest to discover the crumbling colonial splendour of plantations, go beach-hopping and birdwatching, rough it at an ecolodge, travel back in time at a plantation house; and relax at Bom Bom Island resort on Príncipe. Taste slowcooking Santomean specialities and the citrus freshness inside a cocoa pod. Admire majestic tropical flowers and discover a pristine underwater world. Stand on the Equator mark, climb the Pico de São Tomé, and catch performances of the medieval Charlemagne cycle in the rainforest. Replace with elements from other itineraries as preferred. 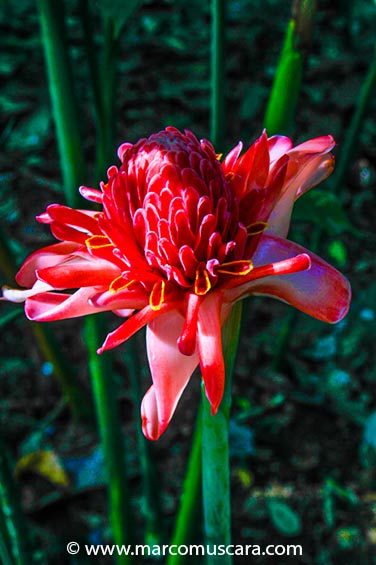 (Photo: The beautiful and vibrant porcelain rose is the flower most associated with São Tomé and Príncipe © Marco Muscarà, www.marcomuscara.com)

Day 3: Drive back to capital and on to Bom Sucesso, exploring the plantations of Monte Café and Nova Moca, overnight Bom Sucesso or Nova Moca

Day 9: Back to capital, visiting Água Izé plantation on the way

Days 12/13: Fly back to São Tomé with a couple of days to spare for onward connection home (beach day, souvenir shopping)

Day 14: Visit Mucumbli Ecotourism Lodge for a relaxing end to your stay

If no trip to Príncipe is planned, replace with three-day cycling tour, Pico de São Tomé, or a snorkelling trip to Ilhéu das Cabras and diving baptism.

Day 11: Relax, back to capital, stopping at Sete Ondas beach and/or Água Izé plantation on the way, overnight capital

Day 12: Beach-hopping along the coast from Praia Micoló, overnight capital

Days 17: Explore the rainforest south of the island with guide, camping

Days 18/19: Fly back to São Tomé with a couple of days to spare before connection home (beach day/souvenir shopping)

Day 20: Visit Mucumbli Ecotourism Lodge or Belo Monte plantation for a relaxing end to your stay