From the Danakil Depression to the thriving modern metropolis of Addis Ababa, Ethiopia offers a wide range of travel experiences. To celebrate our Destination of the Month we asked our friends at Rainbow Tours to share their top tips for travelling to this land of ancient stories, interesting wildlife and thriving culture.

Below you, the land is opening out.  The world turns flat, the vegetation thins, and your eye is drawn by the bright yellow sulphuric plain and the clusters of domed tents that mark the encampments of the Afar.

This is the Danakil Depression, the hottest inhabited place on Earth. 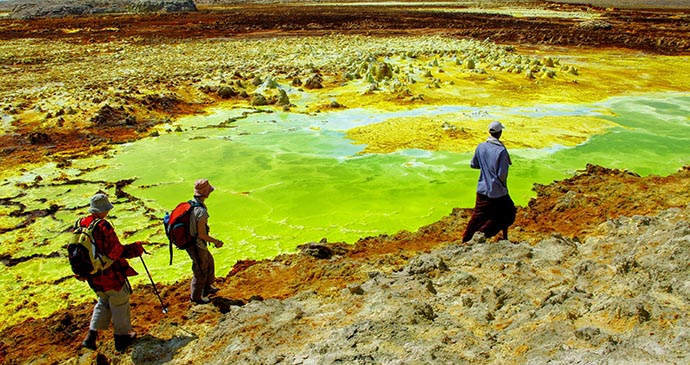 Like the rest of Ethiopia, the Danakil is full of treasures for the traveller willing to hunt for them. A stark contrast to the Tigray highlands you must cross to reach it, the Danakil lies 125m below sea level, the lowest point on the African continent. It is witheringly dry, merciless, so hot that exerting yourself during the day will enervate you in minutes.

If you’re after a real expedition, Erta Ale volcano is not to be missed. Travellers must climb in the dark to make the heat bearable, but the night makes the sparking, oozing lake of lava bubbles in the caldera even more dramatic.

After visiting the Danakil, it’s worth a trip in the opposite direction, up towards the sky. The Simien Mountains boast some of Africa’s highest peaks, with dramatic faces and fascinating wildlife. Here you’ll find the little-known but utterly fascinating grass-eating Gelada monkey or ‘bleeding heart baboon’, who wander the plateaus and congregate in sociable groups. You may also spot the highly endangered and range-restricted Walia ibex, sunning themselves on impossibly tiny ledges. 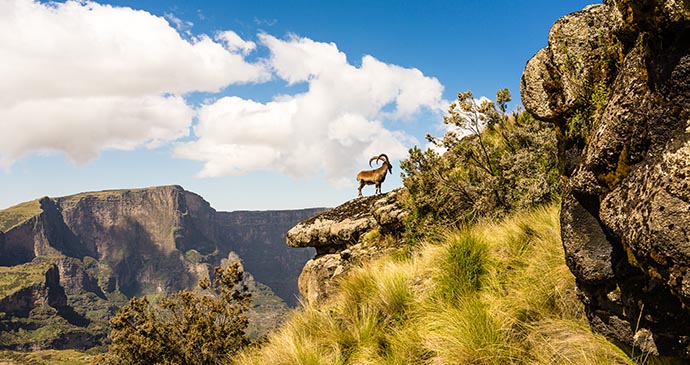 For the chance to spot Ethiopia’s most famous animal, though, the best place is Bale Mountains National Park. Here you’ll find the critically endangered Ethiopian wolf, whose numbers have dwindled to fewer than 400 in the wild, with none surviving in captivity. 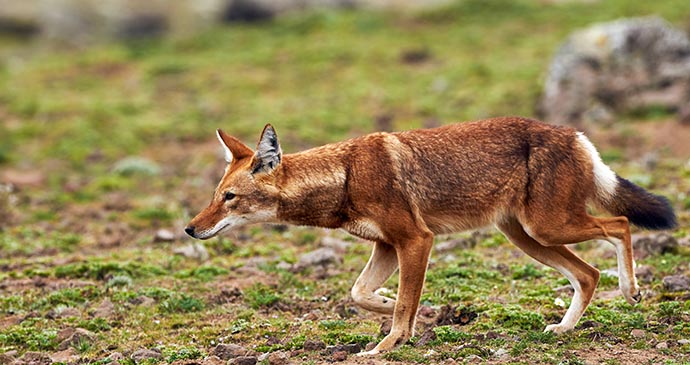 A visit to Bale Mountains National Park is your best hope for catching a glimpse of the elusive Ethiopian wolf © ArCaLu, Shutterstock

Bale would be worth a visit even without the wolves. Hike through the mountains and across high-altitude plateaus, and keep an eagle eye out for the high concentration of endemic flora and fauna.

Not all that makes Ethiopia special is a product of the natural world, though. In fact, we estimate that upwards of 80% of visitors travel for the history and culture, and they have good reason for doing so.

The capital city, Addis Ababa, is a thriving modern metropolis. Its cathedrals are well worth a tour, and of course you cannot leave without visiting the famous Australopithecus, Lucy, or trying the coffee. It’s not called the best in the world for nothing. One brand we particularly recommend is called Tomoca, the tastiest coffee we’ve ever had.

As modern as Addis Ababa is, there are parts of Ethiopia where ancient tradition reigns strong and tribal culture lives on, such as the South Omo & Konso Region. If you are curious, open-minded, polite—and above all respectful—the South Omo is without compare. Here meet the Mursi people, whose women are known for the huge lip plates many of them wear. If you are incredibly lucky, you may be permitted to attend a Hamar bull-jumping ceremony, where the dust rises beneath the thrum of hundreds of feet, laughter and song soaring above the dance. To witness the ceremony is an incredibly rare privilege and one that should be treasured for life, as precious as witnessing a Mountain Gorilla in the wild or taking the ‘flight of the Angels’ over Victoria Falls. 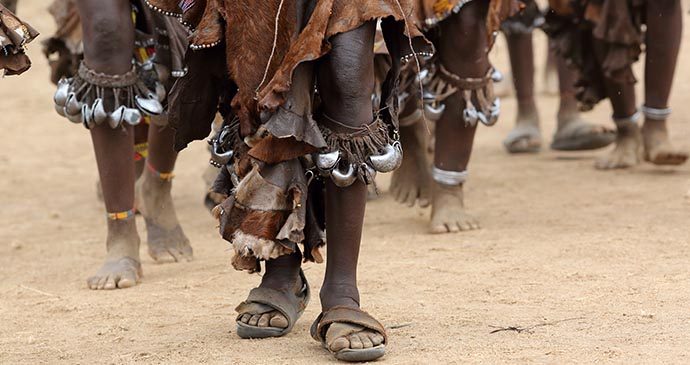 Despite the intrigue and splendour to be found in modern-day Ethiopia, it’s the country’s past that holds the greatest draw for travellers. Perhaps the most famous figure in Ethiopia’s legendary history is Makeda, the Queen of Sheba, who bore the biblical King Solomon a son and named him Menelik. This prince, once grown, travelled to meet his father. During his visit, a member of his retinue smuggled away the Ark of the Covenant on the orders of one of God’s angels, and the Ark still remains in Ethiopia today. The dynasty founded by Makeda and Menelik ruled Ethiopia for hundreds of years, and they left evidence of their reigns peppered across the landscape.

At Gondar, you’ll find the much-photographed castles in the Royal Enclosure. Nearby is Fasilides’ Bath, a picturesque stone structure garlanded with lights. It’s a short flight from Gondar to Lalibela, Ethiopia’s must-see destination, home to great monolithic churches carved out of solid rock in the 11th and 12th centuries. 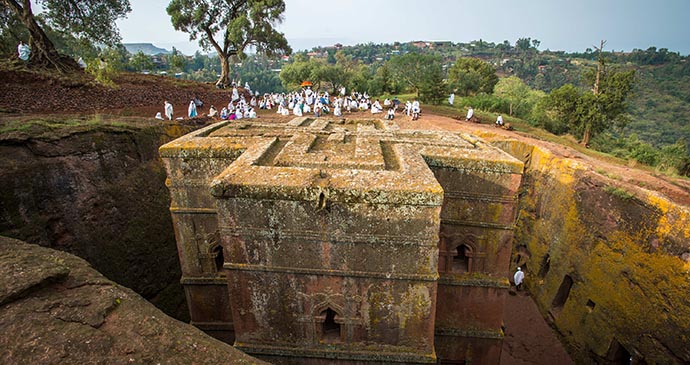 For the adventurous, there are also lesser-known churches to be found in the Tigrayan highlands, not far from the Danakil. The landscape here is dramatic, with finger-shaped rocky outcrops spearing out of the flat Gerhalta Plains. Some of these play host to churches and monasteries, carved right into the rock itself.

If you’d like to delve into Ethiopia’s history, a route we recommend is to start on the shores of Lake Tana. Here monasteries perch on islands and round, grass-roofed churches boast magnificent wall murals. After a couple of days exploring the lake and its environs, set off around its shores to the Simien Mountains. From the Simiens, you can drive to Gondar and Lalibela, then fly to Axum.

From Axum, drive to ancient Yeha, Ethiopia’s oldest settlement, where you’ll find the remains of the Temple of Ilmuqeh, the Moon god. Axum itself is another fascinating place. From roughly 200BC – 700AD, the Axumite kingdom ruled over a vast empire that stretched as far as Arabia. Axum is considered one of the four great powers of its time along with Persia, China and Rome.  Today you can visit the remnants of this mighty empire, including the great stelae. While in Axum, Rainbow recommends taking the time to visit Mariamtsion Church. There is a chapel within the church that is believed by Orthodox Ethiopian Christians to still house the Ark of the Covenant.

Ethiopia should spring to everyone’s mind when planning a holiday full of history and culture. A trip to Ethiopia promises fascination and learning, full of ancient stories, interesting wildlife and thriving culture. 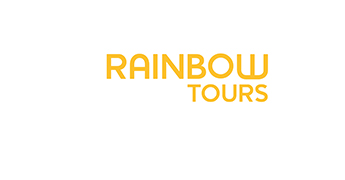 Rainbow’s Ethiopia specialists Derek, Helen and Laura have explored Ethiopia many times over the years and are always eager to offer their first-hand knowledge and experience of this incredible country. Whether you want a personal recommendation for a restaurant or simply to learn from someone who has extensive expertise, speak to Derek, Helen or Laura today on 020 7666 1250 and start planning the trip of a lifetime.