Orientation in Truro is fairly straightforward, with the compact historic centre lying around and immediately south of the cathedral, now gleamingly unwrapped from a long period of restoration. High Cross, by the cathedral entrance, is dignified by the 1780 façade of the Assembly Rooms, decorated with handsome Wedgwood plaques representing Thalia (the Muse of actors), Shakespeare and David Garrick. But the façade is all that’s left: the splendid theatre-cum-ballroom that lay behind has long gone, and the arched Georgian windows now display pasties. A few steps away, Millpool is a quiet, leafy spot beside the River Allen and overlooked by the cathedral café; there’s a 1930s police box by the bridge over the river, which occasionally lends itself to an extremely small art exhibition or installation.

A wander down St Mary’s Street takes you past the Old Grammar School (now a pleasant wine and tapas bar of the same name), founded in 1597; Humphry Davy, the inventor of the miners’ safety lamp, went to school here, shortly after the retirement of its legendary headmaster, George Conon, who described the establishment as ‘the Eton of Cornwall’. William Lemon (the elder) enrolled himself here as an adult; having missed out on education in his early years, the mining tycoon humbly decided to make a start on his Latin and Greek. Whether or not he was allowed to bring his pet chough into the classroom (until it was accidentally shot by one of his junior classmates) is a matter for conjecture. 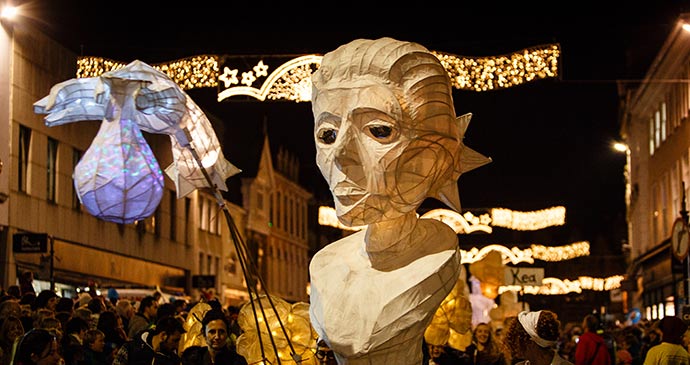 Just around the corner, the many gabled and chimneyed building, known as Coinage Hall (built as a bank in 1848) contains a marvellously old-fashioned tea room on the first floor with grand views of the Italianate town hall and the shops along Boscawen Street. Between Coinage Hall and the town hall, Princes Street (how can you resist entering via Squeezeguts Alley?) was clearly the place to build your house if you were anyone in the mid 18th century. Princes House, designed by Thomas Edwards, was built in 1739 for the chough-loving Lemon, and the Mansion House was the town residence of Lemon’s chief assistant, Thomas Daniell. Edwards was once again the architect, but his brief was different in one important respect: the house was to be built of Bath stone. Thomas Daniell had married Elizabeth Elliot in 1754; as a wedding gift, Elizabeth’s uncle, Ralph Allen, a Cornishman living in Bath, gave them the stone extracted from quarries he owned for the house. The gift had a secondary purpose: Allen had spotted a market in Truro and wanted to showcase Bath stone as cheaper, paler and altogether more desirable than the local Newham stone. The Mansion House took seven years to build – from 1755 to 1762 – at a cost estimated to be in the region of £8,500. And as an advertisement it worked; even the cathedral, when it came to be built just over a century later, was built partly of Bath stone. The problem though, is that Bath stone is not as resistant to the Cornish weather as the local stuff, resulting in the ongoing restoration work to the cathedral.

The completion of the Daniells’ house meant the Enys residence, started in 1706 in neighbouring Quay Street, quickly became known as the Old Mansion House, another fine example of early Georgian town house architecture. On a more domestic scale, Walsingham Place, a perfectly preserved crescent of Georgian cottages, set Betjeman’s heart racing with relief that it had not been lost to the post-war building boom. And you can almost hear the Poet Laureate muttering ‘Proportion, proportion, proportion’ to himself, wandering the length of Lemon Street with a smile on his face.

Among all this Georgian splendour, the concreted-over harbour known as Lemon Quay is something of an anomaly and when the large bronze statue of a naked drummer balancing on a ball, costing £95,000, was unveiled in 2011 as part of the annual arts festival, eyebrows were raised, giving protesting twitterati a field day. The Hall for Cornwall, with its entrance on the quay, gives the place a lively buzz on theatre or music nights, but the quay really comes to life during the city’s jamborees, which include not only the arts festival in late April but also the Music and the Cornish Food and Drink festivals in September, and an impressive City of Lights Festival in November, when enormous paper lanterns, wittily representing everything from dragons to (clothed) musicians are paraded through the streets to the quay.

Want to learn more about Cornwall’s historic towns? Check out our comprehensive guide: