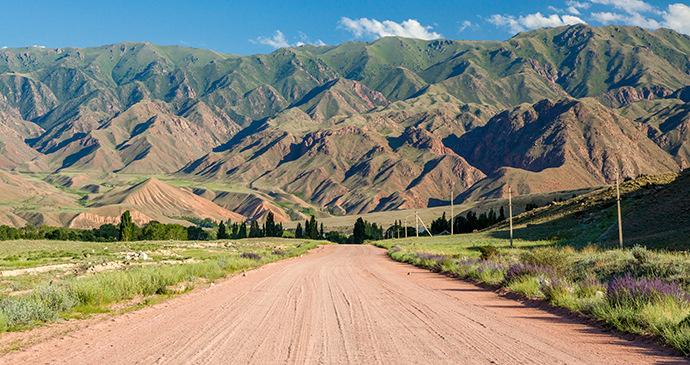 The crash is alleged to have occurred in the Central Tien Shan mountains © Evgeny Dubinchuk, Shutterstock

In the early morning of 28 August 1991, an extremely large flying object, described as being 600m long and 100m in diameter, showed up over the Caspian Sea, tracked by the Soviet radar station on the Mangyshlak peninsula. The radar showed the object to be travelling at a speed of around 960km/h and at an altitude of 6,600m.

Alarmed by this unexpected manifestation, the Soviet authorities immediately broadcast a ‘friend or foe’ radio signal but it received no answer. Knowing that no test flights were taking place in the vicinity, the operators at Mangyshlak issued a military alert. Two MIG-29 fighters were diverted from a routine mission to intervene over the Aral Sea and their pilots were shocked to see a gigantic zeppelin-shaped object when the vessel came within range.

The UFO was described as being metallic grey, with two portholes towards its front and strange green symbols at the rear. There was still no response from the craft so it was decided that the pilots should fire warning shots across its flight path, forcing it to follow the MIGs to land. However, the pilots could not fire, as when they drew close there was no response from their flight controls, so they had to abandon their mission. As they withdrew, the pilots regained control over their planes and were able to make a safe landing.

Ground radar continued to track the vessel, which made a zigzag course back over the Aral Sea at an astonishing speed estimated at 6,800km/h. After a total of 45 minutes of radar tracking, the craft vanished from the radar screen somewhere in the region of Lake Issyk-Kul in Kyrgyzstan.

By the end of September, rumours started to emerge that a large object had crashed in the Shaitan Mazar Gorge near the source of the Sary-Jak River in the Central Tien Shan mountains of eastern Kyrgyzstan. Witnesses from the region claimed they had seen an immense object crash deep into the mountains of the east. At the same time, rumours spread that some locals had found the crash site but had received radiation burns when they approached the wreckage. An expedition was set up to investigate. A UFO group travelled into the mountains for two weeks but could not find any evidence of a crash and eventually had to leave, suffering from frostbite and exposure.

A report came to the attention of the same Russian UFO group in November 1991 that the Russian Air Force had found the crash site, but while attempting to hoist part of the wreckage from the snow a helicopter had crashed, killing all on board. As it was winter there was no opportunity to explore the crash site further until the following year. The group prepared to make a journey to the site in June 1992.

This time they found the crash site, but as they approached to within 1,000m of the craft they suffered from an overwhelming sense of dread and fatigue. In addition, the group’s instruments started to fail spectacularly, as if they were being affected by a powerful electro-magnetic field emanating from the wreckage. They were not able to approach closer than 800m as some of the team were experiencing radiation burns. Photographs were taken but these turned out to be hopelessly overexposed and useless, as did the video tapes they tried to record.

A third journey was planned a few months later but this was ill-fated and ended up being delayed for six years. By the time they returned the UFO was gone, as was the Russian helicopter. Whether the name or location of Shaitan Mazar (‘Devil’s Grave’) has any real bearing on the story – or is merely there for dramatic effect – is unclear.

The district of Shaitan Mazar, close to the source of the Sary-Jak River, already holds some mystical intrigue for the local population as there is said to be a sacred stream here which is gifted with mysterious healing properties. Today, the name Shaitan Mazar will forever be linked with the strange, and perhaps apocryphal, incident that is claimed to have taken place on the eve of the birth of the Kyrgyz Republic. It is also the name adopted by an American heavy metal band.