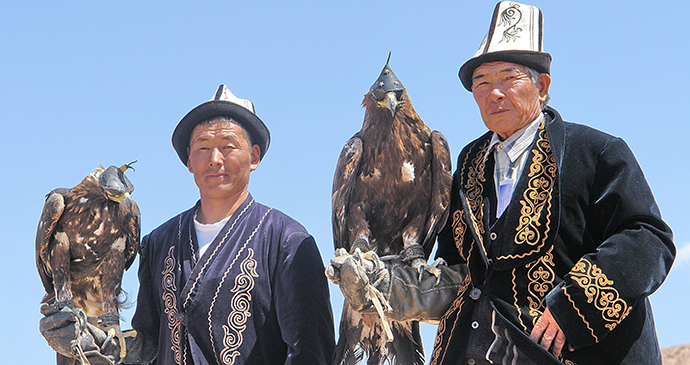 The art of eagle hunting is slowly dying out in Kyrgyzstan and Kazakhstan © Maximum Exposure PR, Shutterstock

The tradition of hunting with large birds of prey, mainly golden eagles, goes back hundreds of years in Kyrgyzstan, and probably dates back to the Mongol conquest around the 12th and 13th centuries. These days, the art is slowly dying out, and it is only practised by a handful of Kyrgyz and Kazakhs in the region.

Before the collectivisation that took place during the Soviet era, the practice was an integral part of normal jailoo life rather than the tourist spectacle it has mostly become today. Bürkütchü, as the practice is known in Kyrgyz, is now mostly put on as a demonstration for tourists, but it was not so in the old days, when a whole family, or even a small village, might depend on the eagle hunter’s skill to provide a reliable supply of animal protein and fur.

The hunters who practise bürkütchü are obliged to forge an intimate relationship with their birds. The birds are captured as chicks from their nest in the wild, a hazardous and, it must be said, environmentally unsound, pursuit that requires scaling precipitous cliffs and avoiding the murderous talons of an enraged and powerful parent. The training process is a highly ritualized procedure that takes three or four years. It has to be done by just one person so that the necessary bond can develop between master and eagle.

The birds generally have a life expectancy of up to 40 years and so it often becomes a lifelong relationship. After capture, the eaglets are hooded and placed in a cage with a perch that sways as the hunter sings to the bird to imprint the sound of his voice. When it is almost fully fledged the trainer starts to show the bird the hides and furs of the animals it will hunt, and training continues with the eagle learning to pursue a fox fur tied to a galloping horse. Some birds fail and cannot be trained, but those that succeed repay all of their master’s effort with intense loyalty: the hunter has effectively become the bird’s parent.

To carry the eagle on hunting forays, a special device, a baldak, is fitted to the saddle to support the rider’s arm. The bird hunts mostly foxes, fawns and other small animals, although they are capable of killing young wolves on occasion. A skilled combination of hunter and eagle is said to be capable of catching 50–60 foxes, a dozen badgers, a couple of lynx and four wolves in a normal four-month hunting season, which begins in late autumn.

The displays staged for visitors usually take place outside of this season, and with no snow on the ground prey is harder to find, and so a semi-tame hare or rabbit is released from a sack for demonstration purposes.

Whatever the realities of Kyrgyz life over the past century, the tradition of eagle hunting is hanging on mainly due to the interest in nomadic culture that the foreign visitors bring. Bürkütchü is often a hereditary calling that is passed from father to son but, as young people move the towns and pursue other jobs, it is sadly a dying art. Talvarbek is the last eagle hunter in Bokonbaevo, and he jokes his relationship with his golden eagle Tamara is closer than the one he has with his wife!