One of Harar’s most enduringly popular attractions is its two ‘hyena men’, who make their living by feeding wild hyenas after dusk on the outskirts of Harar Jugol, thereby providing proof that Ethiopians are capable of perversity far beyond the call of duty. A highlight of any visit to Harar, even to those who have seen wild hyenas in less contrived proximity, this atmospheric spectacle usually starts at around 18.30, when the hyena man starts calling his familiars by name. After 10 minutes or so, the animals appear from the shadows, timidly at first, but they soon become bolder and start taking bones passed to them by human hand or mouth. Visitors are invited to feed the hyenas directly, too, before eventually the stock of bones runs out, and these spectral creatures slink back to whence they came. 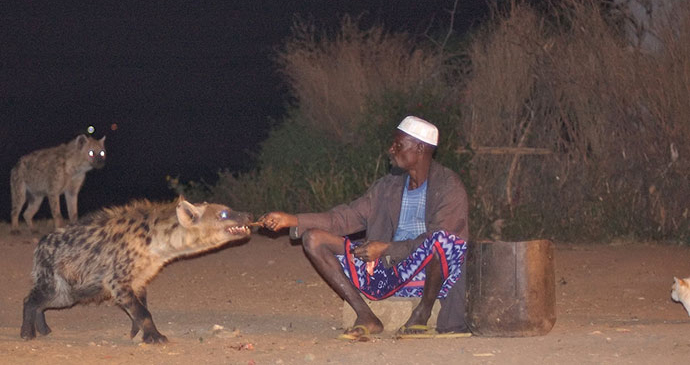 Exactly how and when the bizarre practice of feeding the hyenas arose is an open question. One story is that it started during the great famine of the 1890s, and it is certainly the case that the people of Harar have long believed hyenas to perform an important role in clearing the town of the jinn (invisible evil spirits) that occasionally possess one of the townsfolk. According to this legend, hyenas are the only creatures that can see the jinn, and they routinely attack them and swallow them alive, emitting their characteristic whoop as the evil spirit perishes. But while the nightly feeding of hyenas in Harar may well be rooted in such ancient folklore and customs, most sources indicate it’s a modern phenomenon, probably initiated in the 1950s at the original Islamic feeding site near Erer Gate by a man called Dozo, who is regarded to have had six successors. A second Christian site outside Fallana Gate has been operating for at least 20 years. 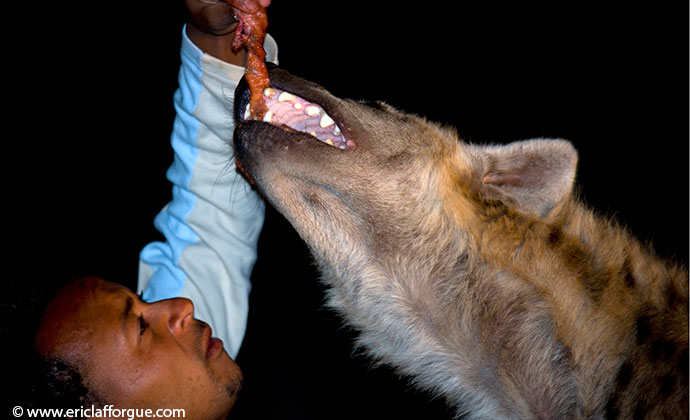 The older hyena-feeding site is next to Aw Ansar Ahmed Shrine, a whitewashed edifice intertwined with the trunk and roots of a large fig tree. It can be reached by leaving the city walls through Erer Gate then turning right on to the road that runs along the outside of the city wall for 300m. The second and generally more productive site, with up to ten hyenas making an appearance on busy nights, is a patch of open ground in front of the Christian slaughterhouse 200m outside of Fallana Gate. Most people organise the excursion as a motorised trip with a guide, which isn’t strictly necessary, as the hyena men both operate just outside the city walls. That said, the car headlights allow for better viewing in the dark and, having seen a hyena’s jaw in close-up action, you may be glad not to be on foot when you head back into town.