The famous Circuito de Oro, or Golden Circuit, is a collection of small towns to the east and southeast of Asunción, each reachable within an hour. The great majority of traditional Paraguayan crafts are based in one or other of these towns, so you can do a circuit that takes you from workshop to workshop, seeing the production of harps, silver filigrana jewellery, pottery, nanduti lacework, leatherwork or the sculpture of wooden saints.

Although the loop can be done in a variety of different directions and timescales, the following towns are highly recommended stopping points. 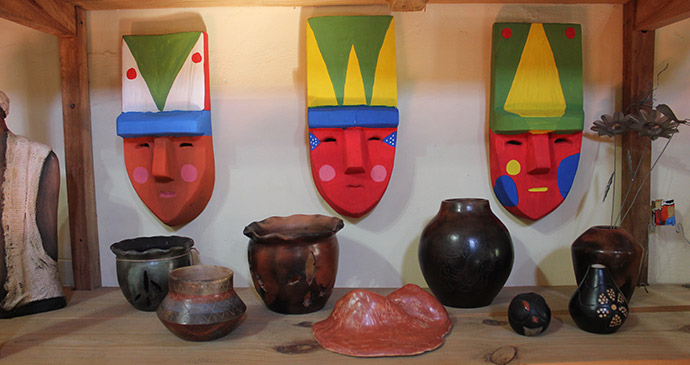 Areguá is renowned for its colourful ceramics © Margaret Hebblethwaite

Areguá must be one of the best towns to visit in a Circuito de Oro tour, one of three specialising in ceramics and the nearest to Asunción. Marked by an elegant church at the top of the hill and splendid colonial-type houses on the Avenida Estigarribia leading up to it, it is becoming increasingly regarded as a prestige town, bursting with little art galleries, that merits the preservation of its architecture. A number of artists and writers have made their home here, including the distinguished novelist Gabriel Casaccia, whose striking novel La Babosa is set in the town. 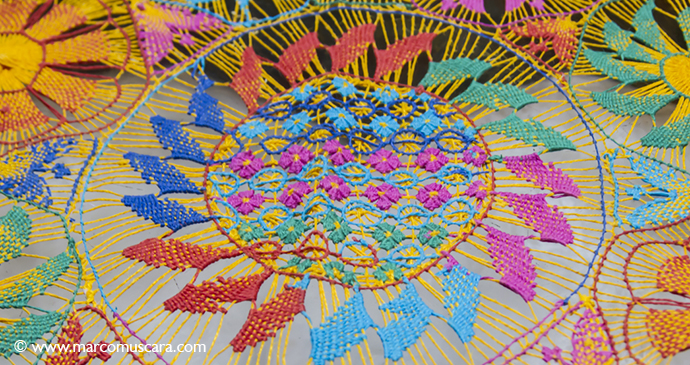 Often overlooked by visitors, Itauguá is actually one of the best places to visit on the Circuito de Oro, renowned for its craft, museum and old streets of colonial houses. Its distinctive craft is the famous ñandutí lace, which is the Guaraní word for a spider’s web: this is usually circular in shape, and then the circles are sewn together to make a large cloth. Its museum has two sections: one devoted to ñandutí, and the other devoted to the art of the Reductions. The streets near the church (one block to the south of Ruta 2) are semi-pedestrianised and date from the time of Dr Francia. With their colonnades, they make the centre of Itauguá one of the most attractive towns in this part of the country.

Capiatá is interesting on a number of counts, the most important of which is its fine, historic church, almost all of it original to the Franciscan Reduction. It also has an interesting museum, both for Guaraní mythology and for religious art, while the Rodríguez family of saint-makers (santeros) have their workshop here and the folk cult of the black saint Balthasar adds a fascinating touch of popular religiosity.

The closest of the craft towns to the capital, San Lorenzo is on the edge of the Greater Asunción area and you pass through it on your way to many others on the circuit, but it is very much worth a visit in its own right. With its church in the middle of the plaza and its dignified colonial houses, the town is also home to the interesting ethnographical Museo Boggiani, and its accompanying shop has the biggest and best selection of indigenous craft in the country.

The furthest northeast of the little clutch of craft towns in the Circuito de Oro, Tobatí is often left out of guided tours. But those who make the effort will discover that it is one of the circuit’s most interesting towns for a number of reasons: its Jesuit-Guaraní statues, including the larger orginal of the famous Caacupé statue; the range of its arts and crafts (pottery, wood sculpture, palm-leaf weaving, mask-making); and for the hill walks close by. The name Tobatí in Guaraní means ‘white [clay] face’, and the economic base for the town is in its brick and tile industry. It is a pleasant small town with some attractive colonnades, an interesting church with a distinguished reredos, and a large warehouse in the Villa Artesanal which is well stocked with craft of all sorts – nearly all from Tobatí or its surrounding villages.

Learn more about Paraguay’s craft towns in our comprehensive guide: