If you’re in Luxembourg during Whit Week, then be sure to head to lovely Echternach. Luxembourg’s oldest (and possibly cutest) town is a treat in itself, with wrought-iron shop signs and majestic basilica, but its Dancing Procession is what makes it really special. Held on Whit Tuesday since medieval times and inscribed on the UNESCO List of Intangible Cultural Heritage and Humanity in 2010, this unique festival sees thousands of people gather on Whit Tuesday to hop, skip and shuffle their way through the town’s cobbled streets. 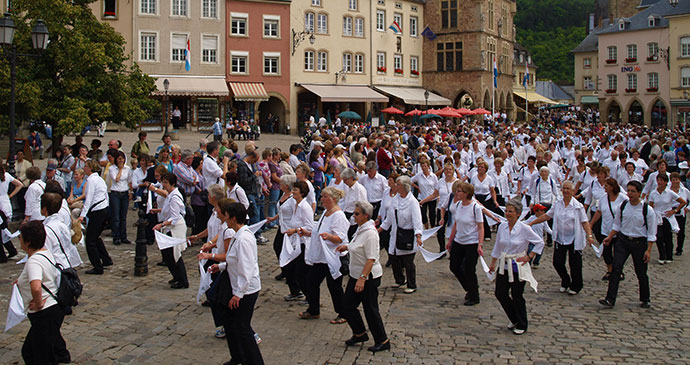 Although the festivities begin the night before with a service at the basilica, the real ceremony starts with mass early Tuesday morning at 05.15, when the many pilgrim groups arrive from across the region, most notably those from Waxweiler and Prüm (Germany) who start walking to Echternach on Whit Sunday. This is followed by the arrival of the guest bishops in the main square, accompanied by the golden statue of St Willibrord, before the Bishop of Echternach gives his welcome from the abbey steps.

Participants are set up according to their parishes or associations, and the first groups (usually those from Prüm and Waxweiler) begin the procession at around 09.30. Each of the 40 groups is split into rows of five, with people joined together by a single white handkerchief. The 1km route starts from the square outside the abbey and heads through the town, where people of all ages line the streets to watch. When I took part, the weather was much cooler than is normal for May, but that didn’t deter people from coming – they simply crowded into the many pastel-coloured pavement cafés or huddled under blankets provided at the roadside.

The procession ends in the crypt of the basilica beside the tomb of St Willibrord, where offerings are given. Due to the huge number of participants (10,275 in 2015), it’s well after 13.00 by the time the last group enters the church. The day ends with a short singing ceremony in the basilica, and throughout the afternoon the various pilgrim groups celebrate with their own services before beginning their journey home. 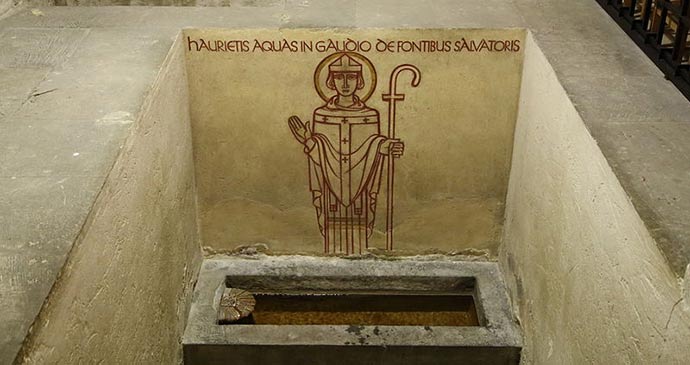 The well of St Willibrord in the basilica crypt, where the procession ends © Laura Pidgley

Throughout history the dancing has taken many forms: at one stage participants would take three steps forward and two steps back; during another, dancers would fall to their knees at the toll of a bell. In this year’s procession, I could see only two variations. The first style (and the one I adopted) is to simply step from side to side in time with the music. The second approach, which is slightly riskier given the cobbled streets, is to leap from one foot to the other – those who chose this style really gave it their all, so much so that I witnessed one poor fellow lose his footing and take a tumble!

So how did the procession come about? The exact origins are unknown, and there are numerous theories, of which the most common suggests that it first began sometime during the 14th century. Records describe groups of ‘dancing saints driven by their incredible suffering’ arriving in Echternach from the parish of Waxweiler in the Eifel. In those days, the crops of the Rhine and Moselle valleys were engulfed by a disease that caused seizures and convulsions.  Believing in the motto ‘Cure like with like’, the people thought that by visiting St Wilibrord’s grave and imitating the symptoms of these so-called ‘dancing epidemics’ (perhaps chorea or ergotism), those suffering from the afflictions would be cured. When the diseases began to wane, the parishioners took a solemn vow to return to Echternach every year. 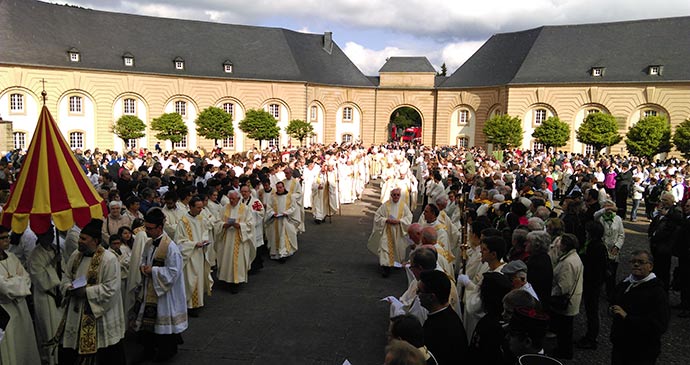 The procession continued annually until 1777, when it was outlawed by Archbishop Wenceslas, and it was abolished entirely in 1786 by Emperor Joseph II; it was not until 1802 that it recommenced. The procession originally began on the left (German) bank of the River Sûre, but this was forbidden by Nazi authorities in 1937. During World War II it was banned by the German occupiers, but people continued to hold ‘secret’ processions inside the basilica itself.

Hopping around Luxembourg’s oldest city may seem a bit odd, but it’s a joyous spectacle for both those watching and taking part – it’s certainly something not to be missed. A word of warning though: the dancing is accompanied by a ‘Springprozession’ tune, played on a loop by a number of brilliant marching bands. You won’t be able to get it out of your head for at least a week.