Belarus is a country with a rich and fascinating history, but there is one theme that pervades the eras: that of suffering. Whether occupied by Lithuanians, Tsars, Nazis or Communists, the country that stands today is one that has been shaped by grief, pain and anguish. For generation after generation, there seems to have been no sanctuary from constant oppression, with the identity of the oppressor being largely irrelevant.

Thankfully, today a true Belarusian identity is beginning to emerge, with higher status being placed on both the Belarusian language and culture within the country, but reminders ofthe tragedy and destruction of the past are still evident throughout Belarus in the form of national memorials, palaces and churches. Here is our pick of those sights that shouldn’t be missed. 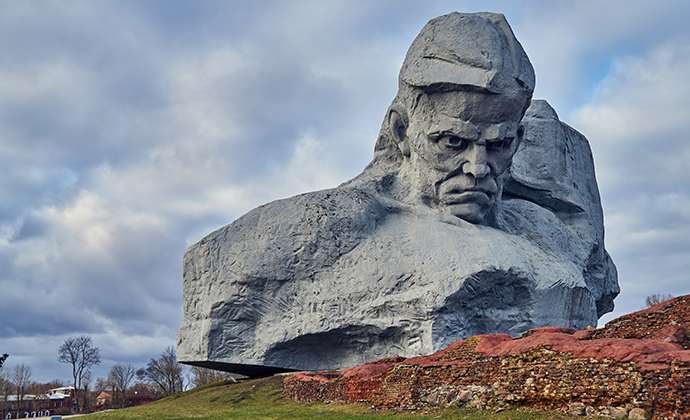 Brest Fortress is one of the country’s iconic sights © udmurd, Shutterstock

This is one of the truly ‘not to be missed’ visits to be had during your stay in Belarus, let alone your limited time in Brest. To do it full justice, you will need to give yourself at least 4 hours to see everything. Sited on an island, the fortress was made legendary by the great heroism and deeds of sacrifice of its defenders during the Great Patriotic War. The city was first in the line of fire when Hitler unleashed Operation Barbarossa on an unsuspecting and wholly unprepared USSR on 22 June 1941. Word of massive German troop movements in the vicinity of the border reached an increasingly panic-stricken Kremlin in the days before the attack began but Stalin did nothing, refusing to believe that the Molotov–Ribbentrop Pact was about to be torn up. The city itself fell within a few hours, but this was the start of the most stirring period of history for the fortress.

The unparalleled feats of heroism and courage of its defenders in the weeks that followed have passed into legend. Not without good reason did a grateful nation subsequently bestow the title of ‘Hero-Fortress’ (the city also being granted the status of ‘Hero City of the Soviet Union’, one of 13 throughout the USSR to be honoured thus). Those soldiers who were first to feel the might and fury of the Nazi war machine somehow held out throughout the summer of 1941 in conditions of intense attrition. Their bravery and self-sacrifiice in holding back the invasion for six long weeks (as supplies of food and drinking water dwindled to nothing) gave the rest of the Soviet Union just enough time to gather itself for the withering onslaught that was to follow. To see now the vivid red-brick walls of the fortress, pockmarked with shell damage and riddled with machine-gun fire, is to gain some understanding of the enormity of the unfolding events that summer. By the time the fortress finally fell, nearly all of the defending troops had been killed. With tragic poignancy and as an enduring mark of their ultimate sacrifice, one of the last of them had inscribed in large letters on the wall of one of the barracks, ‘I am dying but not surrendering. Farewell, Motherland!’ 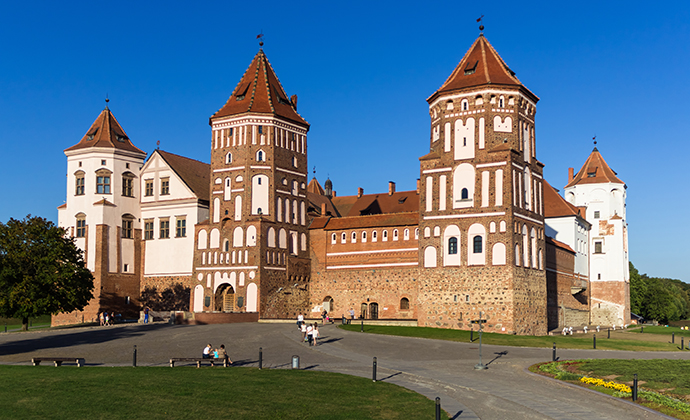 Situated on the edge of the town in a delightful setting overlooking a serene lake and built largely of stone and red brick, Mir Fortress is not only a powerful monument to the influence of the princes who commissioned its construction, but also very pleasing on the eye. It is possible to climb to the very top of the southwestern tower, the best-preserved of the five, from which there are extensive panoramic views over the town and surrounding countryside.

The walls and towers of the castle (still known today as the ‘medieval flower’) first appeared in the 1520s, followed by the construction of the Renaissance palace itself between the late 16th and early 17th centuries. After a battering during the war with Russia in 1655 and the later Northern War, it gradually fell further into disrepair, before a revival in the 1730s when a portrait gallery and ornate banqueting hall were added, together with a beautiful Italianate garden containing citrus, fig, myrtle, cypress, box, mahogany and laurel trees. The scent on the breeze of summer evenings must have been extravagant and intoxicating. Latterly, the complex suffered extensive damage in the Great Patriotic War, when a Cossack regiment was stationed here and a number of engagements took place in the vicinity. A very significant programme of restoration is now complete and this beautiful walled structure of five towers (after the first four, a fifth was added for security purposes in the centre of the west wall facing the road to Vilnius as the only means of access by drawbridge and portcullis) and a courtyard accommodates a small hotel, conference hall and traditional restaurant in addition to the museum of exhibits housed in various rooms throughout the building. 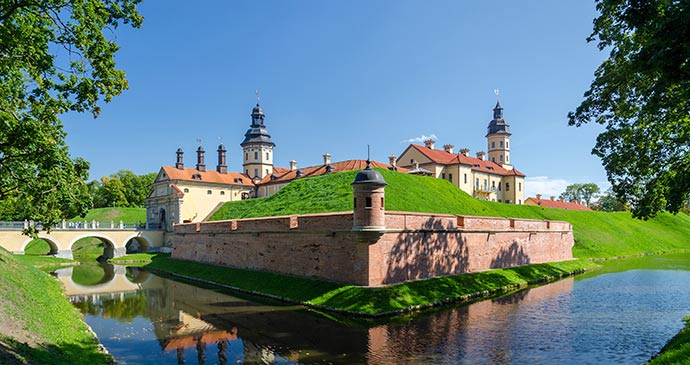 Njasvizh is one of the oldest historic settlements in the country © Katsiuba Volha, Shutterstock

Njasvizh is thought to have first been established in the 13th century. Though the new town is without charm, many of the oldest buildings have been retained in the historical area, and the former home of the Radzivili family is widely regarded as the most attractive palace that the country has to offer. It is surrounded by a large park boasting a number of ornamental lakes and sumptuous gardens. The family’s ownership of the town began in the middle of the 16th century and was to last for more than 400 years, during which time it gained great fame for its prosperity. In 1586, the town was granted Magdeburg rights of self-government and determination, which was a catalyst for rapid economic development. Many trade guilds were established and it was no surprise that at the end of the 16th century it was almost completely rebuilt, the chaotic and haphazard layout of its medieval streets being replaced by the geometric design that remains to this day. 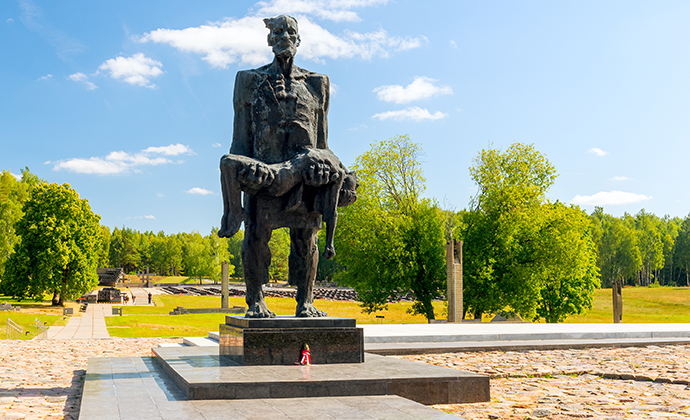 The Unconquered Man is one of Khatyn’s most poignant memorials © kosmos11, Shutterstock

Just 54km from the capital, this complex commemorates the hundreds of villages the Nazis razed to the ground in the Great Patriotic War, constructed on the site of the former village of Khatyn whose inhabitants were brutally butchered. At the centre of the complex is a truly astonishing bronze sculpture, the 6m-high The Unconquered Man. The memorial has 26 symbolic chimneys, each with a mournful, tolling bell, to mark the site of each of the 26 houses, the boundaries of which are delineated by low concrete walls with gates, all of them depicted as being open as a metaphor for the hospitality of Belarusian people. Also marked are the sites of the village wells. On the face of each chimney is a plaque bearing the names of each family member who lived there, from aged grandparents to babes only a few weeks old. 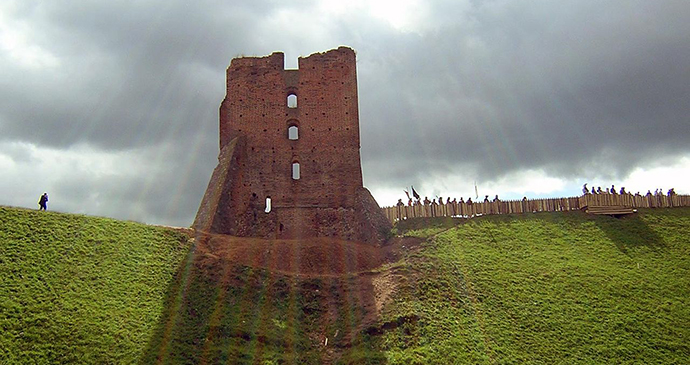 The remains of the castle of Novogrudok, which overlooks the town © Igor Mistitsky, Wikimedia Commons

In the 13th century, Belarus was the nucleus of the great principality of Lithuania and, when Mindaug was crowned Grand Duke of All Lithuania here in 1253, Novogrudok was named the Great Duchy’s capital. The town is dominated by a hill on which the ruins of a 14th-century castle stand. Today, little of the castle’s structure remains but, at the height of its influence, the seven imposing towers made it the largest and most significant fortress in the country, as befitted the town’s status. At 323m above sea level, the castle hill is one of the highest points in the country and the views over the town and surrounding Nieman River, with a radius of 15–20km, are singularly impressive. 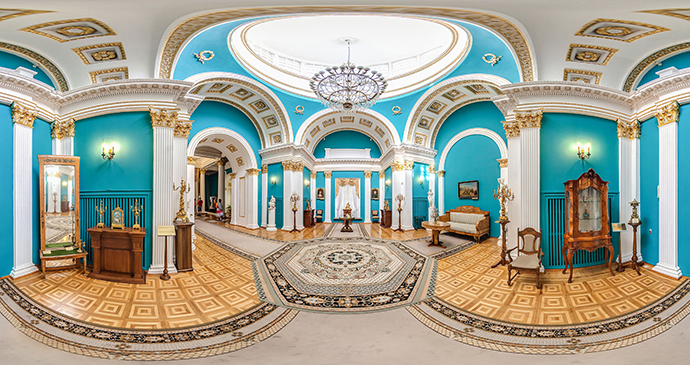 Most of the palace was destroyed in the Great Patriotic War, but there has been an impressive commitment to rebuilding it and reassembling its collections since. When the Nazis came in 1941, 2,000 artefacts were shipped east to Stalingrad, then further east into the Soviet Union as Stalingrad itself came under threat. Sadly only 300 items found their way back to their original home. Look specifically for several candelabras that lean and twist extravagantly, the legacy of the battering they took during the course of their wartime journeys back and forth. Meander the rooms at leisure to see furnishings, portraits, busts, artefacts and sculptures recounting the history of the palace and its owners. See how many portraits you can identify in the Golden Dining Room. A new exhibition of religious items had been established in the autumn of 2017, including holy books, icons, plates, relics, cups, chalices, robes and crosses. One of the galleries also contained a fascinating collection of old Soviet posters to mark the 100th anniversary of the October Revolution. 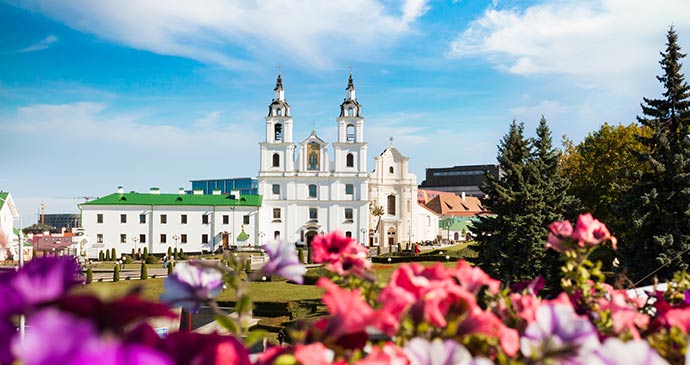 This splendid Eastern Orthodox Baroque cathedral on the edge of Svobody Square was originally constructed between 1642 and 1687 as a Roman Catholic monastery of the Bernardine Order, and part of the monastery complex remains. Ravaged by warfare and long in disuse through damage and disrepair, it was eventually passed to the Russian Orthodoxy and consecrated to Saints Cyril and Methodious in 1860. After the 1917 Revolution it first became a gymnasium for the fire service, then a repository for documentary archives and later a grain store. It is also said that it was used as a political prison. During the entirety of its chequered history it has benefited from many phases of renovation following damage and periods of closure. It is now one of the last surviving monuments of Old Minsk and an enduring image of its history. It houses a number of impressive icons, including that of Our Lady of Minsk, which is said to have miraculously appeared on the bank of the Svislach River in 1500. It is an essential ‘must-see’, with a good souvenir shop. Evening services are held at 18.00 every day except Monday. Outside there are fine views to Pobyedy Park over the Svislach River and Komsomolskoye Lake, but expect to share them with vast numbers of tourists and pigeons; this is probably the city’s most frequented go-to place for visitors.

To discover more about these historic sights, take a look at our comprehensive guide: