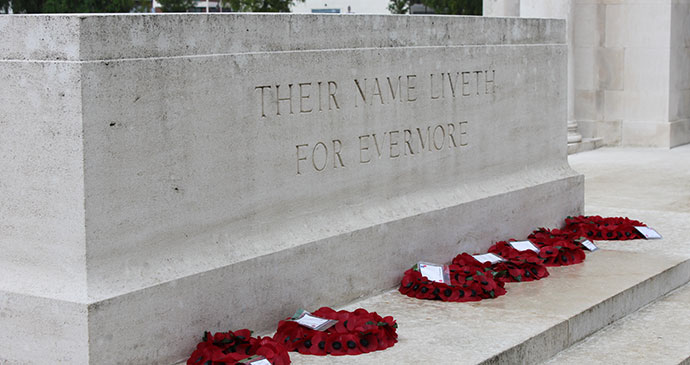 In 1917 Arras was under Allied control, but the town had been taking a pasting since October 1914. A tantalising salient – the military term for a pocket of ground that juts into enemy territory – had developed and Field Marshal Douglas Haig and his French counterpart needed to devise a way to breach the German line. Arras, they decided, would be used in a diversionary offensive, drawing in enemy reserves for several days before the French launched a large-scale bid to break the enemy stranglehold on the Chemin des Dames ridge in the Champagne region.

There was one big snag: how could the Allies concentrate a large number of troops near the Front Line without arousing suspicion? Fearful of the slaughter experienced in the battles of Verdun and the Somme, the commanders suggested a daring solution: to create a vast network of tunnels enabling troops to emerge directly in front of the German line rather than facing the deadly machine-gun fire of No Man’s Land.

So at 05.30 on 9 April 1917, an enormous explosion was the signal for more than 24,000 men to surge from their underground hiding places to appear directly in front of enemy lines. There was no time for the Germans to raise the alarm. Some were still found in their pyjamas in a nearby village.

Though the first few days were a tactical success, with the Germans forced to fall back on their second line of defence, it proved a costly offensive. Heavy reinforcements led to vigorous counterattacks and a series of bloody battles, but the Allies were able to push the combat zone back some ten kilometres and relieve the pressure on Arras. More than 150,000 British casualties were reported between April and May 1917; total losses for the Germans are presumed to have been around the same. While the ground advancements were impressive considering the Western Front stalemate, the high losses and ultimate failure of the Allied offensive overshadowed the gains.

The battle will perhaps be best remembered for the taking of Vimy Ridge, when four Canadian divisions of the British Army separately set out on the same day to conquer the 145m-high ridge – dubbed ‘The Pimple’– whose position allowed the Germans to fire freely at Allied forces. Heavily fortified, with several lines of trenches punctuated with concrete shelters, the ridge had proved impenetrable – all previous attempts to take the hilltop fortress had failed.

However, in the months leading up to the attack, the Canadians had dug a ten-kilometre network of tunnels that ran to the Front. Within 30 minutes of the attack, their path cleared by cannon fire and tanks, the Canadian divisions had overrun part of the German Front Line and, within an hour, parts of the second too.

By the middle of the afternoon, despite heavy losses inflicted during the initial wave, they controlled most of the ridge. The next day they took possession of Hill 145, where the famous memorial now stands. Two days later, the whole ridge was under Allied control and the Germans had been forced back into the surrounding coal basin. The Canadians took 3,400 prisoners in three days along a 14km stretch. It was an outright victory, but losses were high: between 9 and 14 April, 10,600 men were either killed or wounded.

For more information on the discovering the sites of the Great War, take a look at our guidebook: