Every year in Taitung, volunteers take turns to have firecrackers hurled at their heads and bottle rockets fired at their bodies. Wearing nothing but red shorts, gloves, goggles to protect their eyes and wet cloths over their ears and throat, these men are carried through the crowd on a bamboo-and-rattan litter, which they share with a the doll-sized effigy of a god. Han Dan’s followers agree the deity they honour was once an ordinary mortal, but details of his earthly career are in dispute. Most think he was a general who died over 3,000 years ago and who subsequently became a god of war and wealth. It’s said that, because he hates the cold, he bestows good fortune on whoever warms him by showering his icons with fireworks. However, a minority believe Han Dan lived much more recently, and that he was a thug guilty of extortion and violence. Eventually, showing remorse for his crimes, he urged the people he’d terrorised to scorch him with fireworks. They did so with a vengeance – the repentant ex-gangster was blasted to death.

The ritual bombardment sounds dangerous and it is: few of the human Han Dans can endure more than ten minutes on the litter; all of them suffer wheals and minor burns. Unlike the shamans of Taiwanese folk religion, they are neither possessed by their patron deity nor in a state of trance – no wonder many swig liquor while waiting their turn. Each Han Dan wears several amulets and carries a bushy banyan branch. The latter has multiple functions: banyan leaves are said to ward off evil; the branch can be used to block incoming rockets; and when the Han Dan wants to throw in the towel, he waves the branch above his head. 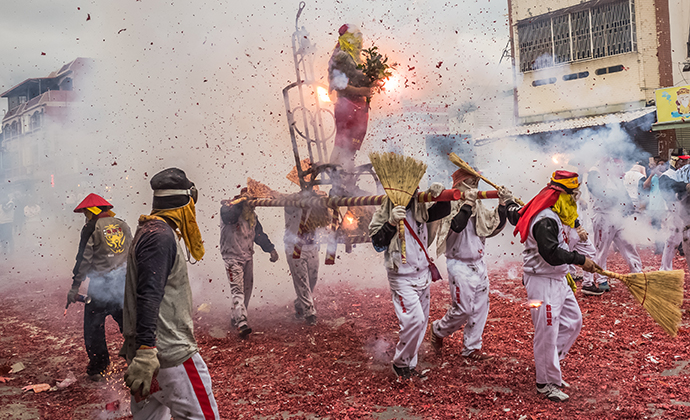 Every year in Taitung, volunteers endure a ritual bombardment with bottle rockets and firecrackers during the Han Dan Festival © elwynn, Shutterstock

According to Ho Chao-ti’s superb 2006 documentary The Gangster’s God: A Film of the Taiwanese Underworld, most of those who climb atop the litter are current or ex-mobsters. Some are new recruits; by taking part, they hope to show how tough and resolute they are, and so gain standing in criminal circles. However, her interviews with older participants revealed more complex reasons for wanting to have fireworks hurled at them: low self-esteem and a desire to suffer physical pain because they’re overwhelmed with guilt about past misdeeds.

Nowadays the event is sponsored by local businesspeople who see it as a good way of getting publicity. In addition to paying for the fireworks, they present each Han Dan with cash in a red envelope and sometimes a small gold medal. There has been a complete about-face in officialdom’s attitude. The ritual, first held in 1954, was banned between 1983 and 1989 because of its gang links; however, in recent years, the scorching of Han Dan has been heavily promoted by the authorities. Recent human Han Dans have included the mayor of Taitung City, an English teacher from South Africa and a local young woman.

Find out more about the folk-religious festivals of Taiwan in our excellent guide to the country: