To mark the new edition of Eccentric Oxford, author Ben le Vay takes a look at the deeply strange goings-on in the city. He says: ‘If anyone doubts that the British and the battiest, barmiest people on earth, just take a look at a small sample of what goes on in Oxford!’

You can join in this bizarre event only if you live to be at least 100 – because it happens on 14 January only in years ending 01 – and join All Souls college. It would seem beyond belief that a richly complicated ritual should survive if it were only happening every 100 years. After all, how would anyone remember the special songs and dances? But All Souls College, Oxford, achieves this seemingly impossible feat with its truly ancient and suitably bizarre ceremony, Hunting the Mallard. It all started in 1437 when the foundations of the college were being built. A mallard was found by workmen in a great drain, and it was of prodigious size. The custom grew up of feasting on this anniversary, called Mallard or Gaudy Night, and then searching the college for this legendary duck. This has traditionally involved the Fellows of the college, led by a Lord Mallard elected for the night and six officers, all wearing special mallard medals depicting the duck. 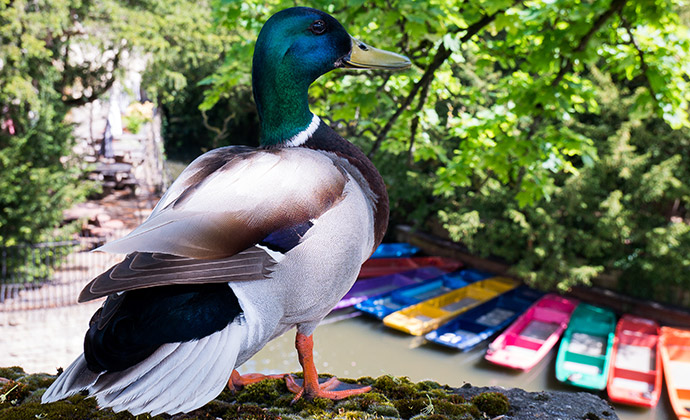 This bizarre event takes place only once every 100 years © Charlotte Dirkse, Shutterstock

At midnight the whole procession starts off bearing lanterns, white staffs and flaming torches, and singing loudly the ‘Mallard Song’. The search goes through every cellar, every room and over the rooftops and is not ended until daylight (unless they really meet the giant duck, I suppose, which would give them a shock). The special ‘Mallard Song’ has several verses, of which this is the rather odd chorus being: O, by the blood of King Edward, O, by the blood of King Edward, It was a swapping, swapping Mallard! Presumably ‘swapping’ meant not that the duck was a great stamp collector, but that it was ‘whopping’, ie: very big indeed. The hunt has, at times, degenerated into unseemly Mallard malarkey, and it was in the 17th century that Archbishop Abbot complained bitterly in a letter to the college: ‘Civil men should never so far forget themselves under pretence of a foolish mallard, as to do things barbarously unbecoming’. Apparently the Mallard hunt had extended around the city, with the doors of sleeping citizens being beaten down in the middle of the night to search for the great bird. Another bishop, in 1801, watched with astonishment as he recorded: ‘I had a full view from my garret of the Lord Mallard and about 40 fellows in a kind of procession on the library roof, with immense lighted torches… all those within half a mile must have been awakened by the manner in which they thundered their chorus.’

So, if you are in Oxford and are woken up by a procession of mallardy singing weirdos with torches and staves coming through your house, possibly having smashed the door down, looking for a giant bird that doesn’t exist, don’t worry (if the year ends in 01 and it is 14 January, that is). They won’t be back for another 100 years …

This could be seen by some as slightly silly (that is, making a world event of a fictional sport of a talking bear, Winnie the Pooh, and his chums, an event which supposedly anyway happened in deepest Sussex and was in fact written by a Cambridge man). That would be to miss the point, which is that Pooh sticks is a surprisingly pleasant occupation, and for a country that holds the world championships in sports taken as seriously as snail racing, toe wrestling and black pudding throwing, why not? If you haven’t read Eccentric Britain, the sport consists of more than one person simultaneously dropping sticks into a river on the upstream side of the bridge over a river or stream, then racing or strolling, depending on the rate of flow of said watercourse, to the other side of the bridge to see whose stick comes out first. Throwing the sticks is not allowed, nor are carbon-fibre computer-designed racing sticks. They must be natural sticks and they must be dropped. Surely it’s just local sticklers, not a real world championship? Well, one recent event was won by the Czech Republic with Latin America taking the silver, and Iceland not making it to the medal podium. The event, which attracts up to 2,000 serious contestants, benefits the Royal National Lifeboat Institution, which may be a good thing given the possible effects of the deluge of sticks on rowing events downriver. 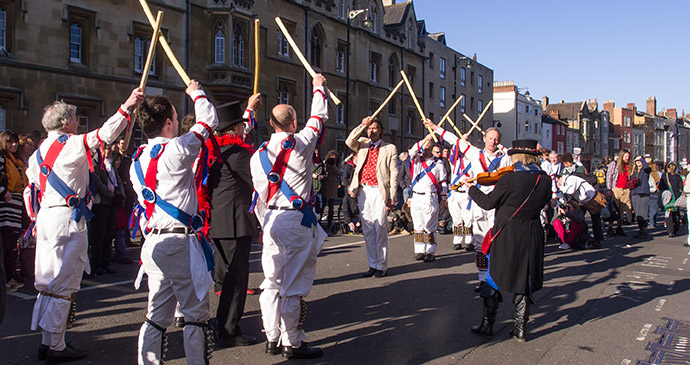 Morris dancers at the May Morning parade © Ed Webster, Flickr

At 5.30am on 1 May each year, come rain or warm weather, small knots of people are seen scurrying through the lanes and alleyways of Oxford, heading east towards the rising sun. As they converge on the High, the crowd becomes a determined stream heading towards Magdalen Bridge, joined by more people from every side street at a time of day when there should be barely a soul astir, until a torrent of people is washing down the High. Some are families carrying children, some are town youths in anoraks or shell suits with baseball caps on backwards, joshing with policemen who line the route. Many are undergraduates, dressed in black tie and ballgowns, late revellers still out from the night before. There are those with silly headdresses, flags and balloons too, plus bookish dons and curious intellectuals from around the country joining what has become a flood moving down the street. It has that cup-tie feeling of a huge crowd intent on one great thing, and yet what is it they seek, what has dragged perhaps 10,000 people from their beds or kept them up all night in anticipation? Merely the chance of hearing Latin medieval madrigals float down from the top of Magdalen Tower, where already the white vestments of the choir can be glimpsed above the parapet. It’s magic, but eccentric. Very Oxford.

If you don’t find the sight of a bunch of choirboys thrashing the floor in the ladies’ underwear department of Marks & Spencer in Queen Street with long canes while a vicar looks on approvingly even slightly eccentric, then you must be born and bred in Oxford. This bizarre ritual takes place on Ascension Day and is part of the ancient ceremony called Beating the Bounds. This involves taking the youngsters of the church to the boundary stones of their parish and beating them – the stones and, formerly, the youngsters – with canes, shouting ‘Mark! Mark! Mark!’ to impress on the next generation where the boundaries are. One such procession leaves the church of St Michael at the North Gate after the morning service on Ascension Day for a three-hour perambulation of 30 stones, all marked with a cross, which the vicar marks with a further cross in chalk and the church’s initials before the boys (or middle-aged parishioners nowadays) beat them. 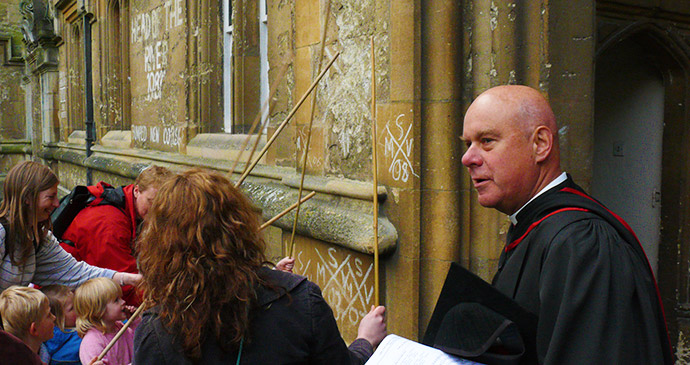 The clergy and boys go through shops and clamber over high walls, for nothing must stop their ancient route, and the vicar, knowing that it will take at least three hours, fair powers along, with appropriate blessings at each spot. We bash the wall of Boots and the vicar says: ‘Bless those who would heal the sick’, and we dive through the storerooms of a chain store to find a stone under some racking and he says: ‘Bless those who supply our city with food and other goods.’ And so it goes on, and although ‘Devil take the hindmost’ isn’t the best phrase to use, don’t stop for a natter or you’ll be left behind while the stickbearing throng surges off through startled shoppers like a bunch of Viking invaders. At one college, St Peter’s, after plunging through the undergrowth shocking students swotting in the gardens, we stop in a common room and I’m served orange juice by a professor of statistics who is also a priest. ‘What are the odds against that happening?’ I wanted to say. No time, we plunge onwards. As I say, one of the marks is appropriately in Marks (and even more appropriate that their brand name is St Michael) but you may receive, as I did, odd looks for grovelling about on the carpet in the ladies’ support garments section looking for the brass plate. This marks the real spot and must be thrashed, but the boundary stone has been moved to a corner where it is on display behind a glass door. An inscription tells us who put ‘this sacred stone’ there (being Oxford, it’s Hunc Lapidem Sacrum wotshisname Posuit).

Where? St Giles, north of Oxford city centre. What? This genteel, wide, leafy street of academic brainboxes, and intellectual pubs frequented by authors such as J R R Tolkien, C S Lewis and Graham Greene, becomes a cacophonous, noisy funfair with gaudy colours, music blaring, rifle ranges banging, hucksters shouting, the stink of sizzling burgers mingling with the sickly smell of candyfloss and that heady mix of generator exhaust fumes and the oily smell of dodgem cars – the garish lights and neon tubes flashing as the rides whirl round and round – the hair-gelled youths from every village and hicktown strutting their stuff where professors wheeled their bikes a day or two before, and the wellspoken children of academics as wide-eyed as the rest.

No government can interfere in any such ancient fair without a new Act of Parliament, and when the powers that be tried to cancel St Giles Fair in 1914 because World War I had recently begun, the Home Secretary was told he had no such powers, so it went ahead. This assault on all the senses ends after a couple of days and, miracle of miracles, there is nothing to show it ever took place the next day. Not one chip wrapper or halfsucked lollipop. Amazing. When? This gets eccentric. It is held on the Monday and Tuesday after the feast of St Giles, which is 1 September. But, if the Feast of St Giles is itself on a Sunday, it is held on the following Monday and Tuesday. Furthermore, the first Sunday being on the first doesn’t count, which I think amounts to much the same thing. Any guide telling you it is the first Monday or Tuesday in September, as some do, has, therefore, two ways to be wrong. Also, any student with the name Giles can ask for free rides if the four digits of the year add up to the age of the reigning monarch. Well, they can ask…