In an extract from our new anthology, Beastly Journeys, Kelsey Camacho tells of travelling through the Arctic landscape of Svalbard with 18 huskies. 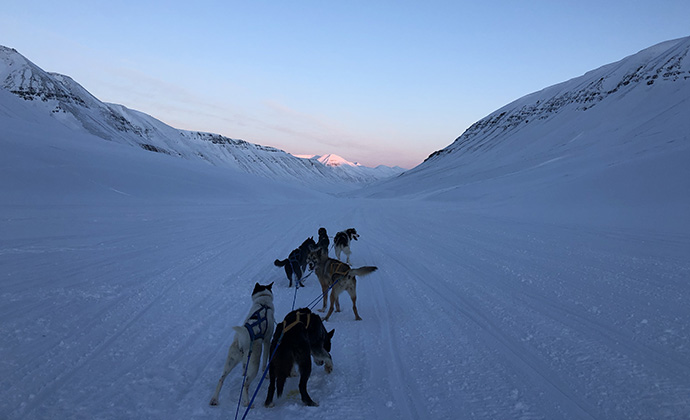 In the harsh landscape of Arctic archipelago, Svalbard, conditions can change in an instant © Kelsey Camacho

That day, the blizzard was so strong that I couldn’t tell whether we were moving or standing still. There was so much snow and wind smearing the landscape that I could barely see my lead dog five metres in front of me. The dogs had collected a layer of ice and snow on their fur, so it almost seemed like they were being erased. They kept their ears back, tails down as they focused on pulling forward. It was only two in the afternoon, but everything was dark – the sun still absent in January, never rising above the southern horizon. That day, we were in the middle of a smudged chalkboard that never stopped expanding.

I was on Svalbard, the archipelago halfway between Norway and the North Pole. I was guiding an overnight expedition on dogsled, with a couple from London and eighteen dogs. The previous night, we had camped on top of a mountain a few valleys away. Setting everything up was the easy part: anchoring the dogs in a circle around the tent to act as polar bear guards, tossing them blocks of meat for dinner, starting a fire, digging a toilet. 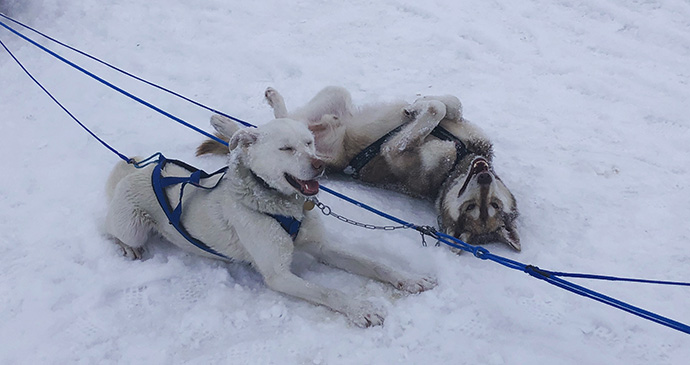 The difficult part was finding our way home. When we left camp, the weather was calm with clear visibility, even for the polar night. The sky still held that deep shade of twilight – the ‘blue hour’, as the northerners call it. I coasted down the mountain with my two guests behind me, each of us in control of our sleds during the steep downhill parts. There were only ten kilometres to go until we reached the kennel.

I was glad that I had brought Carmen as my lead dog; she was one of the most experienced dogs in the yard, and always held a stoic expression. She was calm, brave and confident in her direction. While all the other dogs barked and jumped and howled before running, she always lay down and quivered, staring straight ahead at whatever path we were taking. It was as if she was looking the unknown straight in the eye.

Everything turned once we entered Adventdalen, the wide valley we had to cross in order to make it back to the kennel. It was a sprawling riverbed that was frozen for the winter, but the weather was notoriously terrible there; all of the wind seemed to funnel through that valley. Because of how wide it was, white-out conditions and poor visibility were common.

In some stretches of tundra, the wind had blown away all the snow, leaving bare sheets of ice and rock jutting from the ground. I held tightly to the sled, shifting my weight to avoid tipping over. Like driving a dogsled on the moon, I thought. At that moment, we could have been a million miles from anything.

Only the dogs were illuminated by my headlamp. Everything else was a swirl of night and snow that bounced the beam back to me. 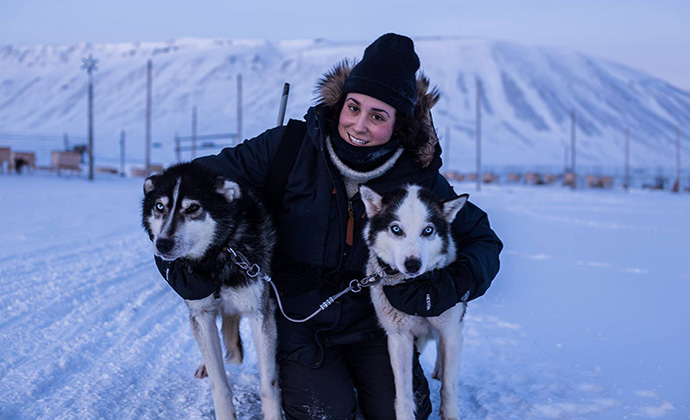 In a pack of 18, it pays to have an experienced lead dog like Carmen © Kelsey Camacho

Kelsey Camacho lives in Longyearbyen, Svalbard, where she guides nature trips by both dogsled and boat. Her work has appeared in Proximity magazine, Entropy magazine, the Portland Review, and elsewhere.

Want to read more of Kelsey’s story? Get 10% off Beastly Journeys here: