For centuries, Jerusalem has stood as the single most revered, contested and loved city in the world and its many different inhabitants have given it a cultural and religious make-up like no other place on earth. A city where Judaism, Christianity and Islam meet; where ancient neighbourhoods tumble into shiny new ones; where both the devout and the secular find their own place; and where modern and traditional somehow flourish together. The Western Wall, Church of the Holy Sepulchre and Temple Mount may stand as the three most ideologically and conceptually opposing religious sites, yet they are by no means the extent.

Church of the Holy Sepulchre 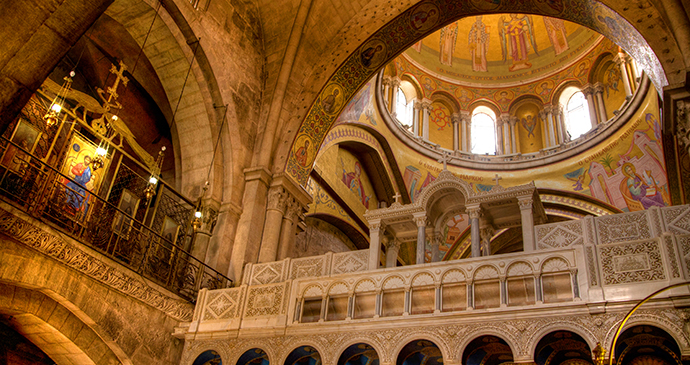 The Church of the Holy Sepulchre is revered as the holiest site in Christianity © Noam Chen, IMOT

This awe-inspiring church is the traditional site of Jesus’s Crucifixion, burial and Resurrection and is the single most important shrine in Christendom. From the exterior, the church looks rather shabby, its scaffolding a long-lasting remnant of the conflict of ownership between the countless religious sects that have laid claim to it. To preserve the peace among these numerous religious communities, the key to the church has remained in the hands of a Muslim family since Ottoman times. Today, the church is divided among the Greek Orthodox, Armenian Orthodox and Roman Catholic denominations, their different ecclesiastical styles and ornate methods of worship forming a fascinatingly beautiful blend within the ancient church.

Church of All Nations 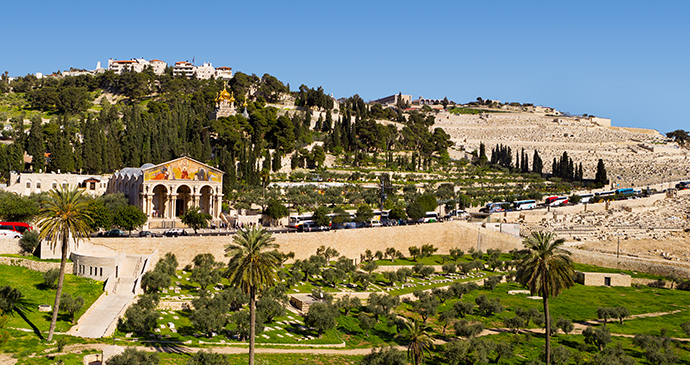 The Church of All Nations is also known as the Basilica of the Agony © rasika108, Shutterstock

At the foot of the Mount of Olives is the garden of Gethsemane known in Christian tradition as the site of Jesus’s agony, prayer, betrayal by Judas and subsequent arrest. Within the tranquil, shady garden stands the magnificent Church of All Nations (also known as the Basilica of the Agony). The church, with its vast fresco adorning the façade, was rebuilt in 1924 on the site of earlier Byzantine and Crusader churches, thanks to contributions from Catholic communities all over the world. Inside the church mosaic symbols of each of these communities are present in the domes. Inside, the Rock of the Agony is said to be the stone where Jesus prayed. 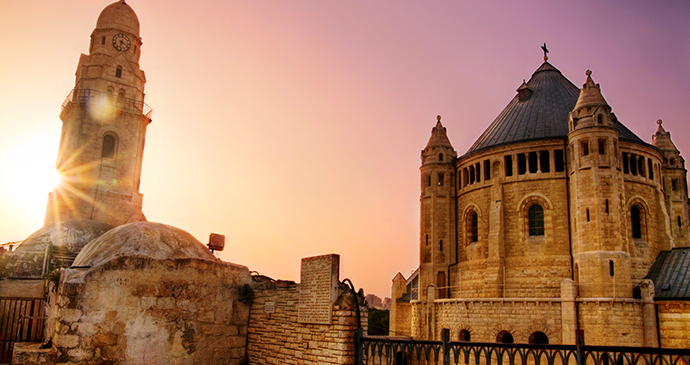 Dormition Abbey is found on Mount Zion where there is a wealth of religious and historic relics to see © Noam Chen, IMOT

Easily recognisable by its blue conical roof, this beautiful church was commissioned in 1906 by Kaiser Wilhelm II, its robust architecture and conical corner towers evoking images of medieval European castles. According to the Roman Catholic and Eastern and Oriental Orthodox churches, this is the site where the Virgin Mary fell asleep and was taken to Heaven (the Assumption of Mary). In the basement of the cavernous church is a statue of the Virgin. The church is frequented by hordes of tour groups so be prepared for a squeeze. 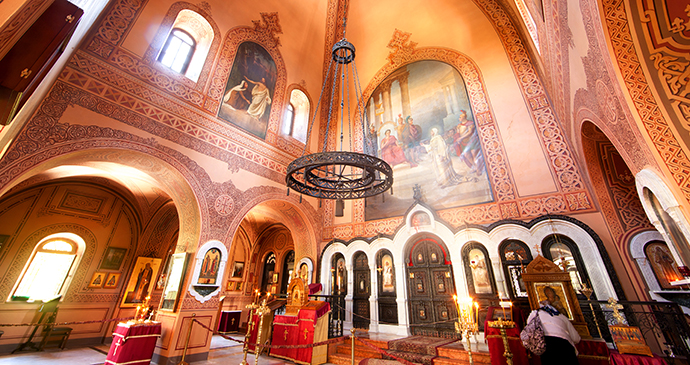 Situated on the Mount of Olives, the Church of Mary Magdalene is a glittering landmark © Noam Chen, IMOT

The elegant golden domes of the Mary Magdalene Church stand as glittering landmarks on Jerusalem’s skyline, unmistakable in their position halfway up the Mount of Olives. Yet the church, built in 1888 in traditional Russian style in honour of Tsar Alexander III’s mother Maria Alexandrovna Empress of Russia, is not just a pretty face. This is the final resting place of two rather prominent royal women: the Grand Duchess Elizabeth Fyodorovna and Queen Alice of Battenberg. 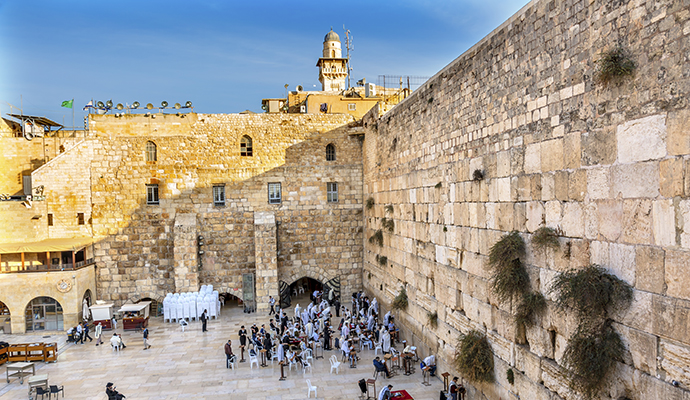 The Western Wall is the single holiest place in Judaism © Bill Perry, Shutterstock

The Western Wall is the single most sacred site in Judaism. It stands as the last remnant of the Second Temple and has been a site of pilgrimage for Jews from all over the world since the Ottoman period, who come to lament over the loss of their temple, their emotional and sorrowful prayers awarding it the name ‘The Wailing Wall’. Today it remains the heart of the Jewish faith and one of the most religious and politically sensitive sites on the planet. The Western Wall lies at the end of the 56m-long, sloping Western Wall Plaza and is the principal site of Jewish pilgrimage, where worshippers come to slip prayer notes in between the ancient stones. The plaza itself is a great place to people-watch, especially during religious celebrations or the Shabbat prayer sessions. 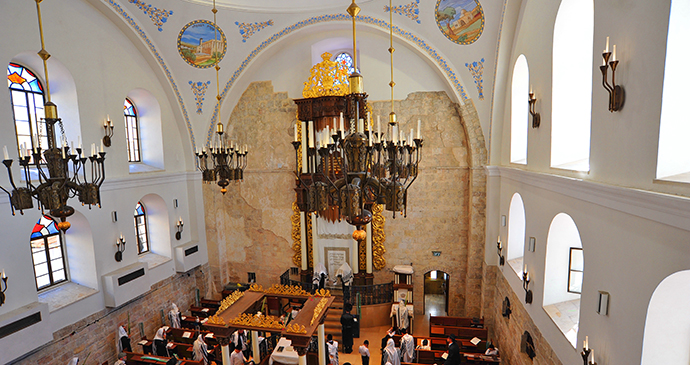 The Hurva Synagogue was originally commissioned by Rabbi Yehuda Hanassi who arrived in Jerusalem in 1701 with 500 Ashkenazis. Following his death, the synagogue fell into disrepair and wasn’t fully rebuilt until 1856. From then until its destruction during the 1948 war it acted as the spiritual core of Jerusalem’s Ashkenazi Jews. After the Israeli capture of Jerusalem in 1967, plans were discussed to rebuild the ancient synagogue, but weren’t put into action until 2006 when its signature arch was dismantled. A US$6.2 million budget saw it rebuilt it to its former neo-Byzantine splendour, and it was completed in early 2010. 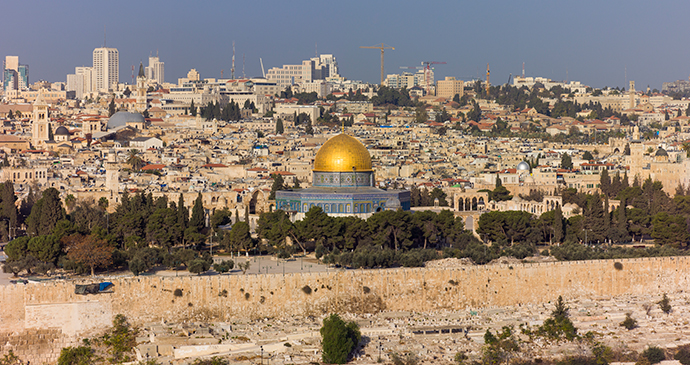 As the call of the muezzin echoes across the city signalling the beginning of Friday prayer sessions, swarms of worshippers pour down the lanes towards Temple Mount © Godot13, Wikimedia Commons

The vast, walled Temple Mount complex occupies the most prized piece of real estate in the country; its majestic golden Dome of the Rock forms the centrepiece of the Old City and is Jerusalem’s holiest Islamic site while Al-Aqsa Mosque is the pinnacle of holiness for both Jews and Muslims. In a city that has seen more than its fair share of turmoil and tension, the Temple Mount is today still a raw and sensitive point, often acting as the centre of unrest between Jews and Muslims. For the most part, however, the area is a peaceful and tranquil place of worship and as you wander around the wide, open complex, it is hard to envisage the 3,000 years of turmoil that have surrounded it. 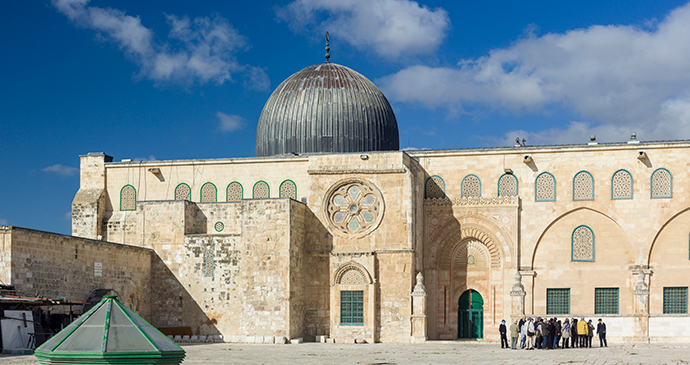 The heart of the Temple Mount is Al-Aqsa Mosque, which is believed to be the site from where Mohammed began his Night Journey to Heaven © Godot13, Wikimedia Commons

The 144,000m² Al-Aqsa Mosque was the earliest mosque constructed in Palestine and is today one of Islam’s most important houses of prayer, believed to be the place referred to in the Quran as  ‘Al-Aqsa’ (the furthermost). Although the mosque has suffered great tragedy over the last century, being, inter alia, the site of King Abdullah of Jordan’s 1951 assassination, it is today a mostly peaceful and active centre of prayer holding up to 4,000 worshippers at any one time. It is believed to be the site from where Mohammed began his Night Journey to Heaven and today ranks as the third holiest Islamic site in the world after Mecca and Medina. To Jews, this is also the site where the First and Second temples stood, where the Foundation Stone upon which the world was built stands, where Adam was created and where Isaac was almost sacrificed by Abraham.

Dome of the Rock 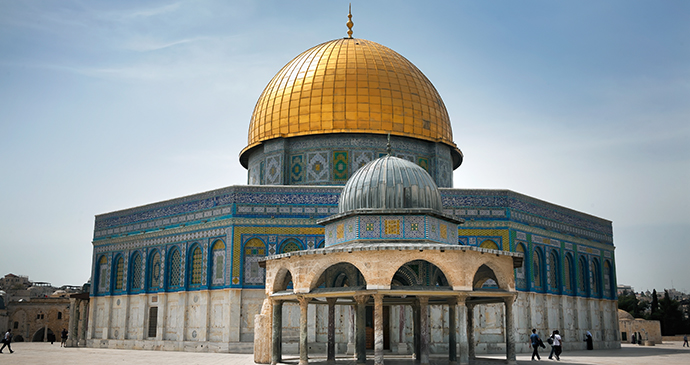 The majestic golden Dome of the Rock forms the centrepiece of Temple Mount © zebra0209, Shutterstock

Crowned by its gold-leafed dome, a million-dollar gift from Saudi Arabia in 1965. It stands as the oldest Islamic shrine in the world (dated to 688) and also boasts the world’s oldest-surviving mihrab (niche indicating the direction of Mecca). Extensive decoration from a variety of periods including mosaics, painted wood, marble, coloured tiles, carpets and carved stone covers both the interior and exterior of the building, most of the blue and gold exterior tiles laid under Suleiman the Magnificent. Muslim pilgrimage to Jerusalem is known as taqdis and marks the final destination on the main pilgrimage (hajj).

To discover more about Jerusalem, check out our new guide to Israel here: